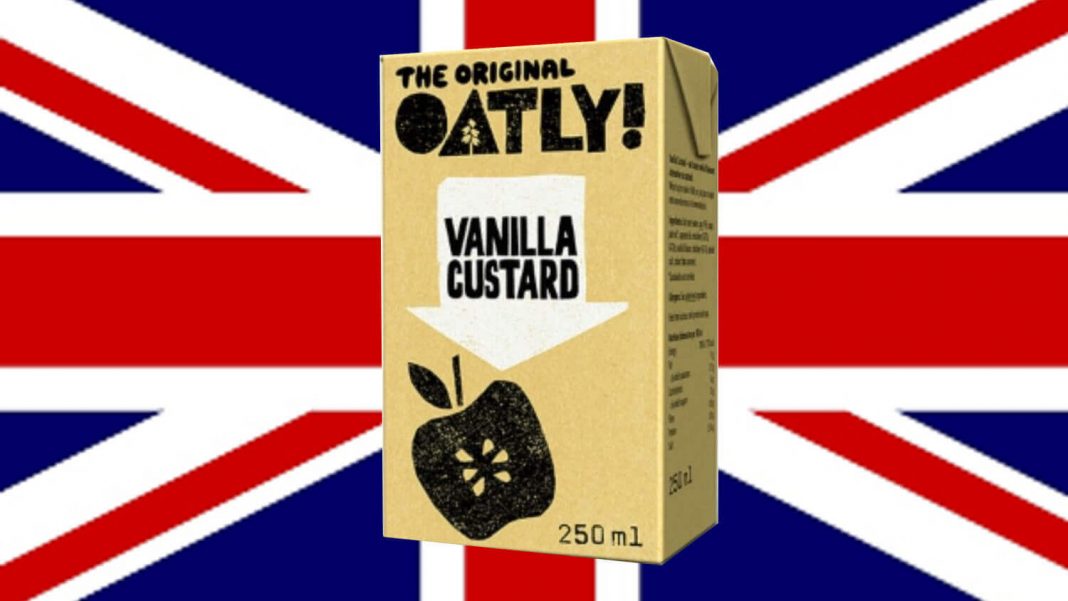 Serious news, American Oatly fans. In the midst of the oat milk shortages that are plaguing grocery stores and cafes across the nation, our friends across the pond have had something very delicious all to themselves: vegan oat milk custard.

Yes, you read that right. Why is this happening to us? It likely has to do with the fact that it’s much easier for the brand, which is based in Malmö, Sweden, to offer its products to the much-closer UK consumer.

Oatly’s Vanilla Custard, called Vanilla Sauce in other countries, is made from a base of Swedish oats and has a thick, creamy texture like the traditional version made with eggs and cream. It does contain sustainably sourced palm oil, which Oatly acknowledges can be problematic for health, but compared to “the real thing,” the vegan custard is free from trans fats. Nonetheless, the brand is looking to gradually phase out the controversial ingredient.

The simplest and tastiest apple pie ?? It’s an old and popular recipe that requires very little effort and only a few ingredients. Served with absolutely delicious @oatly vanilla custard ? Here’s the recipe if you wish to try it yourself. Mix together equal parts (1 cup) of semolina, flour, sugar and 2 teaspoons of baking powder. Divide into 3 parts. Grate 1.5 kg of apples and mix with cinnamon (the more the better ?) Fill greased baking tray with 1 part of your dry ingredients then spread half of the grated apples. Cover with the second part of dry mixture and spread the rest of the apples. Add the remaining dry ingredients on top and finally spread evenly around 7 tablespoons of coconut oil on the entire surface of the pie. Bake for an hour at 180°C ??‍? . . . #veganapplepie #veganbaking #szarlotka #vegandessert #planteater #whatveganseat #vegantreats #vegansofig #vegansofldn #plantbaseddiet #veganfoodshare #weganizm #weganka #veganfood #vegansoflondon #cojedzaweganie #dietaroslinna #govegan #veganyum #veganism #vegangirl #veganforlife #ukvegans #plantpowered #instavegan #appleseason #oatly #oatlycustard #vegancustard #szarlotkasypana

Oatly recommends serving its vegan custard with fruit tarts and apple pies. It can also be used for making homemade nondairy ice cream, whipped into a fluffy vanilla cream, or eaten by the spoonful, if one is so inclined.

While Oatly is working on opening up a production facility in New Jersey, it’s happening to meet the demand for its signature oat milk. At this time, the American product lineup consists of regular oat milk, low-fat, barista, chocolate, and mocha. However, the U.S. website indicates that some of the brand’s international products, including vegan yogurt, oat culinary cream, ice cream, creme fraiche, and vanilla custard, will be available soon.

If it’s any consolation, last April Inside Scandinavian Business reported that Brits were facing their own Oatly shortage crises. It got so bad that one customer said they drove to all Tesco stores in a 40-mile radius in search of the brand’s iKaffe, known as the Barista Blend in the U.S. Others pressed supermarkets to tell them which days Oatly deliveries are received, while some shoppers simply bought as much as they could from stores, leaving slim pickings for everyone else.

It’s not unlike what’s happening in the U.S. right now – one local organic grocery store in Astoria, Queens, told LIVEKINDLY that customers do indeed walk out of the store with a bag full of Oatly cartons. The employee then discreetly shared the store’s Oatly delivery day.