Located on the back patio of a bar called the Monarch in the city of El Paso, Texas, Lick It Up EP is a food truck founded by a Mexican punk rocker. The truck serves up vegan versions of dishes that fuse local and traditional Mexican street food flavors.

The no-frills eatery was created by Edgar “Pato” Delfin, a 35-year-old punk musician hailing from Ciudad Juárez, Mexico. Reported by Vice Munchies, Lick It Up EP has humble origins: “Basically the inspiration comes from me getting wasted and eating all this stuff on the streets of Juárez,” Delfin said. “I already knew how to make vegan food—I just wanted to twist it around and emulate Juárez-style street food.”

Delfin was raised in Melchor Ocampo barrio, which has been described as “one of the city’s oldest and toughest neighborhoods.” It was there that Delfin got into the punk scene and graduated from la Universidad Autónoma de Ciudad Juárez with a degree in Sociology and a minor in Philosophy. 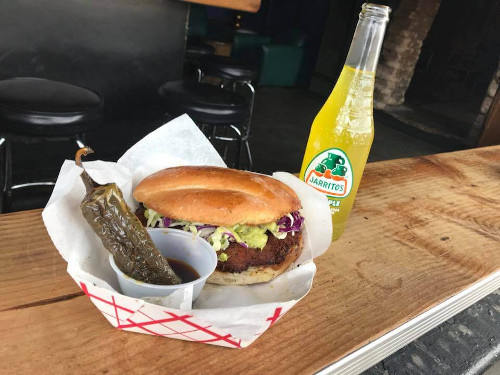 However, in 2007, the newly-elected Mexican president Felipe Calderon’s attack on drug cartels had an adverse effect on society, particularly in Delfin’s home city, where as many as 10,000 were killed. In 2010, along with as many as half a million Juarenses, Delfin fled his home for the sister city of El Paso, Texas. There, he began work as a chef at a restaurant called Eloise, where he taught himself how to cook vegan and transitioned to a vegan diet for ethical reasons. His ultimate goal was to cook vegan versions of his favorite street foods. In 2017, when he was able to open Lick It Up EP with a former partner, that dream was realized.

Tortas de milanesa, flautas de papa, fried gorditas, tacos de “carne” adobada, nachos, and marinated jalapeños torreados, are some of the traditional Mexican dishes one will find veganized on the menu. Tortas, one of the food truck’s most popular menu items, when traditionally served, consists of a thinly-sliced breaded and fried steak, served on a buttered roll with avocado, crema, lettuce, tomato, and salsa. Delfin’s vegan version replaces steak with a slab of deep-fried, house-made seitan. According to the reporter after just one bite of a Lick It Up EP torta, “Any negative associations I’ve ever had about Mexican vegan food, vanish, and in my degenerate carnivore heart I feel a wave of shame for all the jokes I ever made about vegans.”

The food is a hit with the residents of El Paso, many of whom are Mexican or Mexican-American. “I think American vegetarianism and veganism is almost considered a white, bougie concept,” Erica Marin, a customer, told the Munchies reporter. “But part of decolonizing our diet is going back to our roots of how our indigenous ancestors in the Americas ate—and much of that was plant-based. Plus, if you have abuelita knowledge, our spice and sazón knowledge, you can easily transfer that to meatless dishes.”

Delfin is most proud of how his food connects with customers from his native Mexico, particularly those who have had to stop eating meat due to health concerns: “They come here and its so special to see a lady who hasn’t had a gordita in 20 years, eats it, and says it’s the best thing she’s had in years.”