Named after “Bohemian Rhapsody,” the UK’s third best-selling single of all time, the gluten-free beer is made by the Kent-based craft beer company Westerham Brewery. The famous tune has been solidified in pop culture with a little help from the iconic car scene in the 1992 comedy, “Wayne’s World.”

According to the website, the lager is brewed “with the finest English lager malt” before it is fermented and cold conditioned for four weeks. It is made with Czech-grown Saaz or Zatec noble hops, providing the distinctive aroma and bitterness of Bohemian Pilsners. The brewery adds, “Pilsners are traditionally quite bitter and this version is no different.”

This isn’t the first instance that rock ‘n’ roll and veganism have met. In June 2015, a “Bohemian Rhapsody” lager launched — the same year as the band’s 40th anniversary. It followed the release of their “Killer Queen” vodka. The commemorative lager, pictured below, is no longer available, but Westerham Brewery’s “Bohemian Rhapsody” is still available. 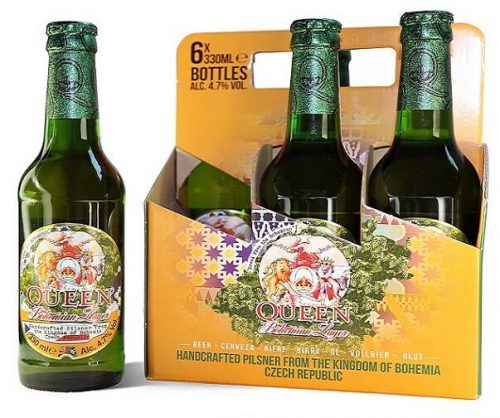 The English pop-rock band You Me At Six collaborated with the London fast food chain Temple of Seitan last October to launch a vegan kebab pop-up named You Me at Shish. Open for one night only, the plant-based “party” celebrated the launch of their latest album.

Members of American punk-rock band Blink-182 have also used their fame to promote veganism. Bassist Mark Hoppus recently urged his Twitter followers to treat farm animals with the same care and respect as we do pets, while drummer Travis Baker backed a march of silence organized by a coalition of Los Angeles-based animal rights advocates.