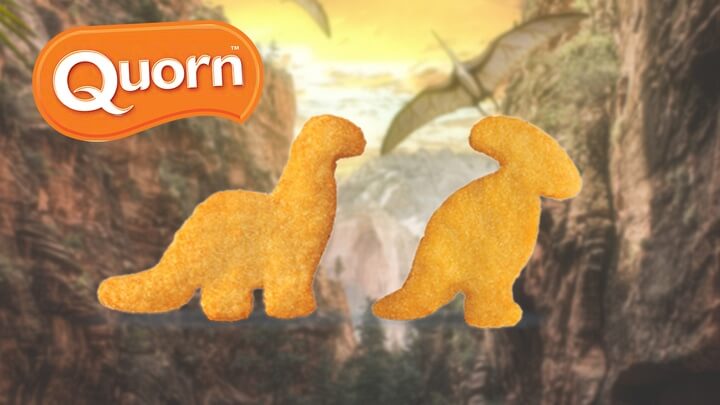 Major vegan and vegetarian meat brand Quorn may be answering the prayers of veggie children — and drunk adults — by launching dinosaur-shaped nuggets.

The 21-year-old vegetarian found herself craving the childhood dinner-time classic, and felt it necessary to ask Quorn to step in and launch its own meat-free dinosaur-shaped nuggets.

“I am missing out on eating nuggets shaped like my favourite creatures, but I am a vegetarian, so I can’t eat the real dino nuggets,” Chey wrote. “Everyone would like them, for example: Kids & adults. I can confidently say adults would like them, because I am an adult… damn dudes, I just really want some dino nuggets to cure my depression.”

I drunk emailed Quorn about a couple of months ago begging them for dinosaur shaped chicken nuggets to “cure my depression”. ?? (I do really want dino nuggets though ngl) pic.twitter.com/zroUJq8QcZ

Though the intoxicated Twitter user may not have expected it, Quorn replied – and seemed to be a fan of her idea. The company’s Customer Support Team first apologised for taking months to reply, “[excuse] our dinosaurs for the late reply as they are getting old and rusty,” it noted, before revealing, “they really liked your idea and have convinced us to look into it!!!”

Thrilled, Chey — a veggie since the age of ten — shared the exciting reply via Twitter, which received almost 29,000 likes in November.

Speaking to Femail – a column for UK national newspaper the Daily Mail – Chey explained how spontaneous her email was, and how surprised she was to receive such a positive response.

Chey explained that – whilst intoxicated – all she could think was “just that I wanted dinosaur chicken nuggets.” She told her friends that she planned to email the major company, and when getting ready for bed, sent the email. “I remembered sending the email the next morning, I wasn’t blackout drunk,” she added.

If Quorn decides to launch new dinosaur-shaped nuggets, they could likely be vegan. The company, which recently opened the largest meat-alternative factory in the world, already offers vegan chicken-style nuggets.

It also revealed over the summer that many of its new products will be plant-based, investing £7 million into research and development to create more foods without any animal products at all.