Top Tier Foods president Blair Bullus told the Daily Hive that the partnership was formed shortly after his company created Sushi Quinoa, a pseudo-grain developed specifically for the sushi restaurant industry. Bullus noted that there was a growing demand for plant-based food among Canadian consumers.

“It is trending where people are just looking for those alternatives to meat, and in Canada the numbers suggest huge growth in these areas, so when one per cent of people in 2013 identified as vegans, now six per cent — so that’s a 600% increase just in that short period of time,” he said.

The company is currently in talks with a number of sushi restaurants across Vancouver to introduce Ocean Hugger Foods’ vegan tuna. 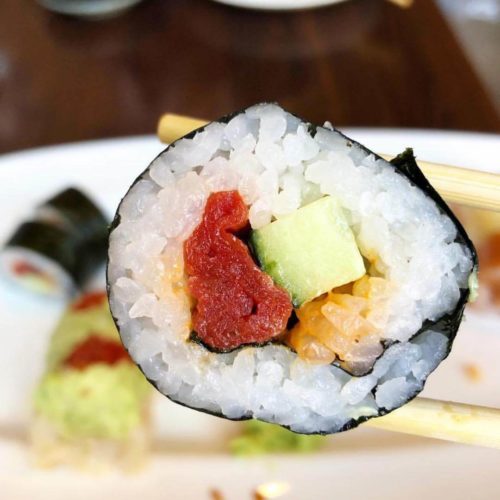 “Tastes like tuna. If you bite into it, you’ll get the very same sensation of biting into a raw piece of ahi tuna,” Bullus said, adding that customer feedback has been “amazing.” The price point is similar to traditional tuna, so it won’t cost more than the average sushi roll.

The sustainable vegan seafood brand recently partnered with Quebec-based chain Yuzu Sushi to bring Ahimi to all 60 of its restaurants. Stateside, it’s served at Blue Sushi Sake Grill as well as at the sushi counter of select Whole Foods Markets.