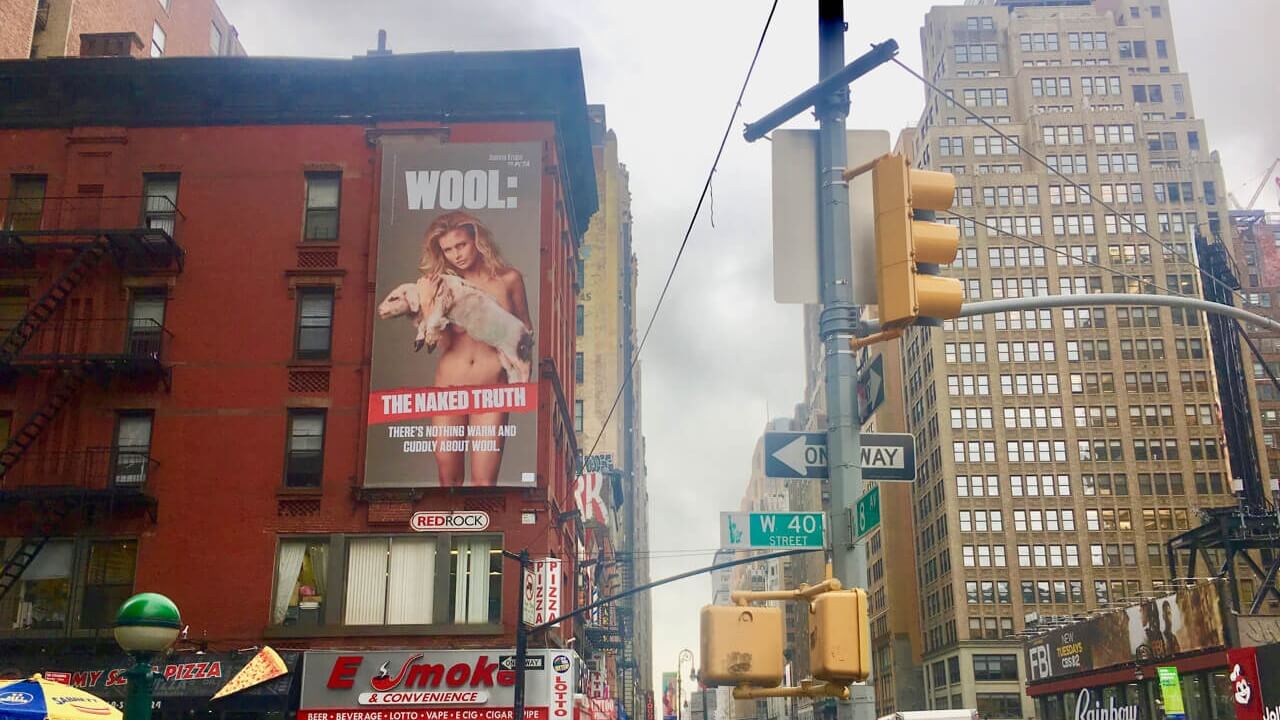 Polish-American actor and animal rights activist Joanna Krupa, who has appeared on “Dancing with the Stars,” “The Real Housewives of Miami,” and on “Top Model” as host and head judge, is making her stance on the wool industry perfectly clear. A new billboard featuring the star was recently placed in Times Square, one of NYC’s most famous tourist attractions, to urge passersby to ditch the fabric due to concerns about animal cruelty.

The 29-foot-tall promotion was made possible by the largest animal rights organization in the world, PETA (People for the Ethical Treatment of Animals). The billboard shows Krupa standing naked with an injured sheep, alongside the words “THE NAKED TRUTH. THERE’S NOTHING WARM AND CUDDLY ABOUT WOOL.” Writing online about the billboard, PETA revealed that Krupa “would rather go naked than wear wool, which is violently shorn off sheep.”

The billboard was strategically placed “within shouting distance” of Forever 21’s NYC flagship store, PETA noted. The animal rights group has been urging the retailer to ditch wool for some time. In a fight to ensure the industry isn’t pulling wool over consumers’ eyes, PETA released eight film projects that exposed the animal cruelty involved in the production of wool. The exposé featured footage from 72 different sheep operations across four continents and included evidence of workers punching, kicking, mutilating, and stomping on animals. Further, when animals’ skin is cut or torn off, wounds are “crudely sewn up with large needles and thread without pain relief,” PETA said.

To reflect the cruelty of the industry, Krupa herself was “stripped bare” and wore makeup to suggest she had been “beaten” like the animals. “Sheep beaten and abused for wool need someone on their side, too,” Krupa said in a statement. “My PETA ad may be shocking to look at, but I hope it will open people’s eyes and encourage them to choose kind, wool-free fashion.”

Along with the billboard, Krupa penned a letter to Do Won Chang and Jin Sook Chang, the co-owners of Forever 21, urging them to cease their sale of wool. “There are plenty of cruelty-free fabrics — such as Tencel, organic cotton, hemp, bamboo, and others — to opt for instead,” she pointed out.

Krupa joins other names in the entertainment industry speaking out about wool production. Golden Globe winner Joaquin Phoenix and actor and author Alicia Silverstone, both of whom are vegan, also appeared on anti-wool billboards in collaboration with PETA.