Italian writer, thespian, and vegan activist Alfredo Meschi has 40,000 tattoos on his body — and the reason why might bring you to tears.

Meschi did it for the animals.

Meschi is covered head to toe in 40,000 tiny tattoos – black crosses – each carefully inserted with vegan ink and completed within a year. Speaking to European magazine Cafébabel, the activist explained the reasons behind his choice.

“Why do I have 40,000 tattoos? Because 40,000 non-human animals are slaughtered in the world every second, just to satisfy our appetites,” Meschi, who has been vegan since 2014, said to the publication.

“It’s as if our awareness of injustice, compassion, and empathy is a tap that gets turned on and off,” he said. “And every second, there are no fewer than 40,000 non-human animals killed for our benefit. I wanted to capture that, preserve it forever on my skin – that awareness of that number, every second.” 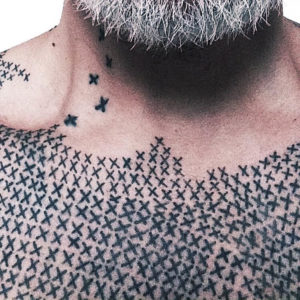 The activist has led an interesting life. Born in a small town in Tuscany into a family of fishermen and hunters, Meschi has been employed by information technology company IBM, worked as a theater teacher, and after spending the last 50 years fighting for animal rights, now uses his body as a “permanent performance piece, a political manifesto,” Meschi said to Konbini.

There is barely a gap of unmarked skin left on him. Using his body as a canvas for his message, the self-titled “artivist” – a person who uses their artistic talents to challenge injustice and oppression – believes that in addition to their aesthetic appeal, tattoos can be a powerful tool for creating awareness.

The permanent nature of tattoos drew Meschi to the art form, along with the political and social connotations that come with having a tattoo, according to Tattoodo.

The symbol of an X is meaningful, too. “I chose the ‘X’ because it’s a ‘checkmark,’ a neutral symbol that we use when we are finished with something, counting something, or killing ‘something,'” Meschi said to Cafébabel.

Meschi’s body art attracts a lot of attention. “When people see me or my picture, they react with great enthusiasm or with ferocious criticism,” Meschi explained. “Yet either way, the important thing is that they pay attention. Starting conversations, asking questions – to me these are all precious opportunities to start a path towards awareness,” he said.

He added, “I’m an anti-speciesist activist 24/7,” referring to the form of discrimination whereby people give varying levels of importance to different animals based on their species. Those who are anti-speciesist argue that the species group one falls under has no moral significance. Specifically, it addresses the widespread belief that humans are superior to animals simply because they are humans.

Meschi counts all of these reactions as achievements. Speaking to Magzter, he explained, “I express my art through my body, and my activism through the bodily involvement and emotional communication of my performances.” He holds experiential workshops, “participatory” photographic exhibitions, and performs theater pieces to further voice his message. 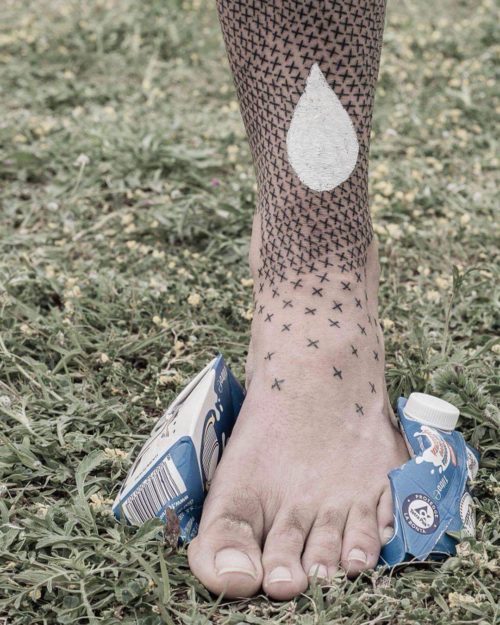 All of the tattoo ink – as well as the disinfectants – used for Meschi’s work is vegan, but not all tattoo ink is free from animal products. Non-vegan tattoo ink can contain bone char, gelatin from hooves, glycerin from animal fat, and shellac from beetles, according to animal rights organization PETA.

Animal-derived ingredients can appear in other areas of the tattoo process, too. The stencil paper user by tattoo artists is commonly made from lanolin, which comes from sheep’s wool, and disposable razors can have glycerine in the razor strips, according to The Vegan Society.

Ointments and soaps could also contain animal-based ingredients. Speaking to The Independent, Dina Dicenso, owner of Gristle Tattoo, a vegan tattoo shop in Brooklyn, New York, recommended having a conversation with the artist beforehand to find out what kind of products will be used. Artists are “usually happy to provide the brand names of the products they use,” Dicenso said.

With more people going cruelty-free, vegan tattoos are becoming more popular and a growing number of parlors advertize whether they are vegan-friendly. Website Vegan Tattoo Studios allows you to search for venues near you that use animal-free ink.

Opting for a vegan tattoo won’t disrupt the experience in any way, according to Dicenso. “The tattooing and healing process is exactly the same” when using vegan ink, she said. 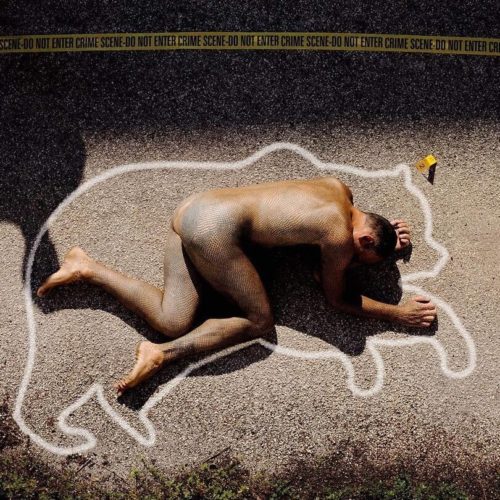 Meschi’s tattoos aren’t the only way he has raised awareness about the meat industry. He has participated in photoshoots inside of slaughterhouses whilst wearing a cattle tag in one of his ears. He has dunked himself into freezing seawater to address issues of overfishing. Other photo shoots see the Italian wearing a pig mask on his head “in loving memory of those 1.5 billion pigs killed every year for our insane appetite. Bacon? Ham? Sausages? No,” the artist said online.

Meschi insists that people must band together and do their part to make a difference. “The era of ‘present moment art’ begins. And in the present moment, we all need to face the biggest challenge of our history – saving a planet that is dying, and interrupting a holocaust of sentient beings,” he said. “The first step in accomplishing these two perspectives is becoming ethical vegans. And we can do it now. Every second counts.”

Meschi isn’t alone in using confronting figures to trigger a conversation about animal issues. Last year, fashion brand Lacoste launched a line of polo shirts meant to raise awareness about ten of the world’s most endangered species. The critically endangered animals included types of dolphins, tigers, parrots, turtles, condors, rhinoceroses, and lemurs, among others. The number of polos Lacoste produced aligned with the remaining population numbers in the world. Only 1,775 shirts were made.

Meschi is also not alone in using tattoos as a means of promoting a shift away from animals, either. Celebrity tattoo artist Kat Von D now promotes vegan tattoo inks and tools. The hashtag #vegantattoo has nearly 170,000 entries on Instagram. 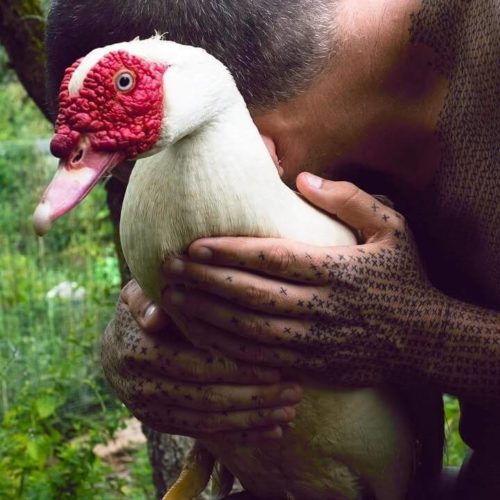 More than 150 billion animals are slaughtered every year for food, according to The Vegan Calculator, which displays a live counter online of the number of pigs, rabbits, geese, farmed and wild caught fish, buffaloes, horses, and cattle, among various other animals, being killed for food.

An average non-vegan or vegetarian person living in a developed country will eat roughly 7,000 animals during their lifetime. However, more people are choosing to ditch animal products in favor of plant-based foods.

Veganism is surging around the globe; in the U.S, the number of vegans went up by 600 percent in three years. In the UK, rates of veganism boosted by 700 percent in two years. Animal welfare remains a leading driver for those choosing to go without meat, dairy, and eggs. It was the main reason that nearly 80,000 meat eaters signed up for last year’s Veganuary campaign. The 2019 initiative was even more popular, with a quarter of a million people signing up to try veganism.

A number of factors are pointing people toward a vegan diet. Many are giving up animal products for health reasons — consumption of animal products is linked to a number of health risks including heart disease, stroke, diabetes, and some forms of cancer.

But concern for the environment is also inspiring people to ditch animal-based foods. Last year, the largest-ever food production analysis, completed by a team of Oxford researchers, found that going vegan was the “single biggest way” consumers could help to reduce their impact on the planet.

Some estimates point to livestock production as the single biggest contributor to the greenhouse gas emissions crises. All total, animal agriculture has been estimated as contributing 51 percent of GHG emissions worldwide. The estimate comes from the Worldwatch Institute.

According to the paper, scientists have “significantly underestimated emissions of methane expelled by livestock,” notes the Independent. The researchers argue that the “gas’s impact should be calculated over 20 years, in line with its rapid effect – and the latest recommendation from the UN – rather than the 100 years favoured by Livestock’s Long Shadow. This, they say, would add a further 5bn tons of CO2e to livestock emissions – 7.9 per cent of global emissions from all sources.”