The Vegan Society just released a teaser video to promote their exclusive interview with Fiona Oaks, a vegan record-breaking marathon runner. The video is part of the organization’s new digital event series, The Vegan Society Talks.

Oakes is a committed vegan with a passion for helping animals. She first ventured into vegetarianism for ethical reasons, then naturally progressed into veganism when she learned about the abuse that can occur within the dairy and egg industries. Although she has a full-time job as a firefighter, she still finds time to pursue her two passions: running and saving animals.

In 1993, Oakes founded Tower Hill Stables Animal Sanctuary in Essex. Over twenty years later, the animal sanctuary has expanded to five locations across the Essex area. She and her partner still care for all of the inhabitants, which includes four hundred and fifty rescued domestic and farm animals. The sanctuary acts as a forever home for these animals, who have either been abandoned, abused, and/or neglected. 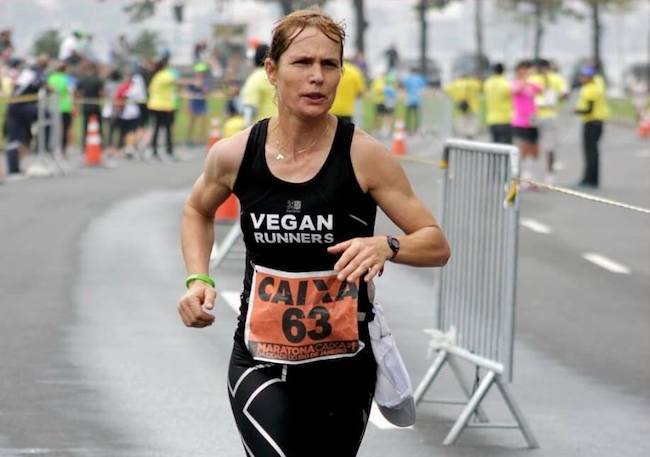 When not tending to the sanctuary or fighting fires, Oakes pounds the pavement. She has been running on a competitive international level for over a decade. She has won several marathons, including the North Pole Marathon, in addition to setting several pace records. She is the fastest woman to complete a marathon on all continents (including the North Pole), and she even ran seven marathons in seven days, consecutively, each day on a different continent.

When asked about how her vegan diet affects her athletic performance, Oakes said, “I try to break down stereotypes and myths attached to veganism by my actions. I am one of only 800 female fire-fighters in the UK – a job which people don’t expect to see a female doing, let alone a vegan one. I run endurance events, a thing which people don’t think you can do if you are a ‘weak vegan’.” On the ethical side, she also noted, “I honestly believe that the most benefit to me being vegan is that I do not carry the burden of guilt that I would have to endure knowing that I abused others for my own benefit.”

For her Vegan Society Talk, Oakes will discuss her journey to veganism, running, and give tips on how anyone can become an advocate for the animals. The talk will be available for those who sign up for The Vegan Society’s mailing list.