A clever shopper stocked up on 53 packs of vegan Beyond Burgers — a total of 106 patties — for just $1.94 each, making each burger effectively $1.

Redditor Numbahz23 shared their big plant-based grocery haul in r/vegan, one of the site’s many niche forums earlier this week.

“Piled up on those last minute beyond burger deals w/promo coupon @53 packages… /$1.94 each. Definitely Set for quite some time now…,” they wrote.

Made by California-based vegan protein brand Beyond Meat, the Beyond Burger is famous for its meaty flavor and texture. It’s available in more than 25,000 locations worldwide, including Whole Foods Market, Kroger, Walmart, Safeway, and Target.  A two-pack of the meat-free burger costs around $6-$8 each in the US, depending on where you are. 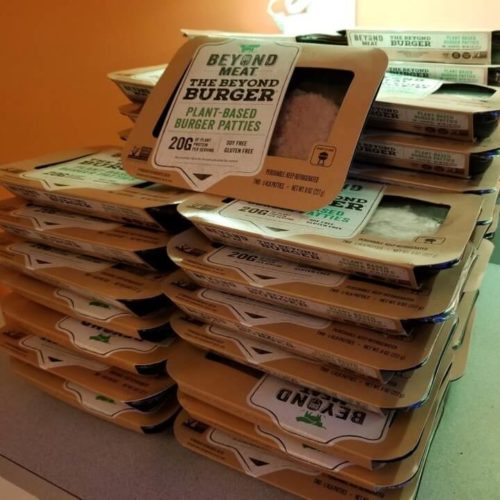 A Redditor bought 53 packs of Beyond Burgers for $1.94 each | image/Numbahz23

But, Numbahz23 explained, “almost every store had on sale secretly for $4.99,” which they stacked with a $3 off coupon. It was no easy feat: “This load took many trips… driving around, enjoying the weather picking a package up here and there all week.”

“I felt like I just robbed a bank… of vegan burgers lol,” they added.

Commenters were impressed with the feat. “You could start the Beyond cartel meat trade with that stash,” said one.

The Beyond Burgers are currently stashed in the OP’s freezer for future barbecues.

According to Numbahz23, they got the coupon from “Beyond Meat Day,” an unofficial holiday announced by the brand following its successful IPO launch.

The company went public earlier this month, with shares increasing 163 percent on the first day — one of the most largest IPOs in the US in nearly 20 years. In honor of the success, select restaurants serving the Beyond Burger gave it away for free and Beyond Meat offered a $3 off coupon.

While the Redditor was able to bring down the price of the Beyond Burger with a clever hack, the company is working on making vegan meat more affordable.

“We have an ambition to be part of the generation that separates meat from animals,” CEO and founder Ethan Brown told Forbes last March, adding, “There’s no reason this shouldn’t be cheaper than meat, and to get there we need to make investments in the supply chain.”