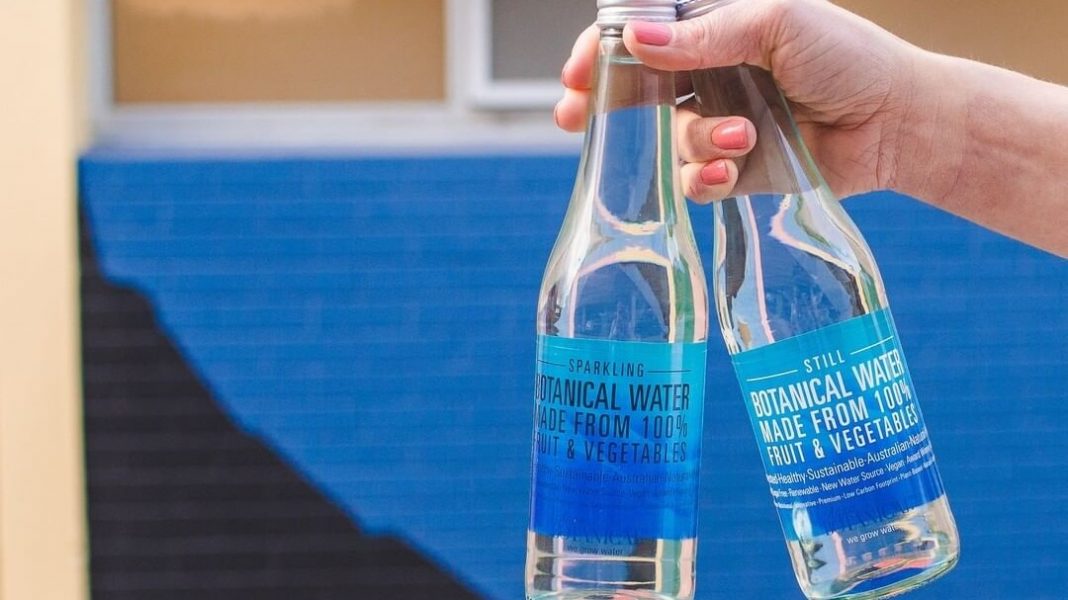 Award-winning Australian beverage brand Aqua Botanical has developed what may be the world’s first way to “grow water,” unlocking a sustainable and renewable source from everyday fruit and vegetables.

Australian farmers grow copious amounts of fresh produce each year, however, not all of it makes it to market. Some is sent to juice companies, which then press fruit and vegetables to extract the juice. Along with pulp, water is a byproduct of the process and is typically discarded.

“What many people don’t realize is that 90% of plants are made of water, meaning that when they are pressed to extract juice and then evaporated to make a concentrate, they produce a large volume of water in parallel,” Paule explained.

Thanks to Aqua Botanical’s patented water technology the water doesn’t go to waste. The aqueous liquid is “harvested,” in the Australian countryside, then filtered, mineralized, and bottled.

Each bottle of botanical water contains 74 plant-derived minerals, including Iron, Magnesium, Potassium, and Zinc. It can be made from any fruit or vegetable, organic or non-organic, that’s juiced. The “harvesting” process effectively removes any present toxins, resulting in clean, pure water. Aqua Botanical adds only subtle carbonation to its sparkling water variety.

“Until recently, this aqueous liquid from juice was discarded with environmental detriment. Dr. Bruce, as we love to call him, combined intuition with science to produce natural water made from plants and in so doing coined the term ‘Botanical Water’ to reflect its new sustainable source,” Paule continued.

According to the Conversation, liquid waste from the juice-making process is often released into the environment and in some cases, used for irrigation. The practice can lead to a number of environmental issues, including nutrient imbalance, overgrowth of algae, oxygen loss, and the death of aquatic animals such as fish, crustaceans, and amphibians.

Aqua Botanical saves the aqueous liquid created by the juice industry through its innovative process. The result is crystal-clear water with a clean taste and a silky-smooth finish. Paule added, “It has body and finesse without the salty or acidic after-taste found in most mineral waters.”

“Discovering a new plant-based source of natural drinking water is a remarkable and transformational gift to the world,” Paule said.

Aqua Botanical’s botanical water has a lower environmental impact compared to other bottled varieties. According to National Geographic, while nearly 70 percent of the earth is covered with water, only 2.5 percent of it is fresh. The majority of that fresh water is inaccessible, frozen in glaciers and snowfields, leaving only .007 percent of the world’s water for 6.8 billion people.

“Some of the world’s largest aquifers are now polluted and over-used and are drying up faster than they are being replenished,” Paule said.

According to the UN, 1.2 billion people – roughly one-fifth of the world’s population – suffer from water scarcity and 500 million are approaching a similar situation. A further 1.6 billion people face economic water shortages due to their country’s lack of infrastructure to extract water from rivers and aquifers. Water is critical not only to survival, but also to socio-economic development, energy, and food production.

It is an issue that is already affecting a number of nations, including India, China, Indonesia, and Latin America. In the United States, Flint, Michigan, and rural towns suffer from lack of access to clean drinking water. Water scarcity is expected to affect more in the European Union and Australia in the years to come.

Botanical Water has won several awards since its launch. It was presented with “Best Technology Innovation” and “Best CSR Initiative” at the 2018 Zenith Global Bottled Water Awards in Evian, France, out of 100 entries across the globe. At the 2017 InnoBev Awards, Aqua Botanical took home the titles for Best Sustainability Initiative and Best New Drink Concept.

While proud of the win, Aqua Botanical sees it as an opportunity to open a dialogue on providing those less fortunate with a sustainable, renewable water source at a critical time.

“All of the world’s biggest beverage companies were in attendance and we invite them to open discussion on how they too can work with us to make a difference,” Paule said.

Water With a Mission

Helping other nations gain access to fresh, clean drinking water is a mission close to the heart of Aqua Botanical.

“In the poorest nations on earth, access to water often involves long and arduous treks to an open well to source water which is often contaminated,” Paule said. “It’s estimated that every 90 seconds a child age under five dies because of a lack of access to clean water and sanitation. This must change and we need to find new ways to fix this tragic problem.”

By 2025, it’s estimated that 1800 million people will be living in countries with absolute water scarcity and two-thirds of the world population may be living under stress conditions. This is due to the fact that in the last century, water use has grown at more than twice the rate of the population increase.

The first project is to produce 50,000 liters of botanical water per day in India’s Tamil Nadu region, which is home to 17.5 percent of the world’s population, but only 4 percent of the world’s water. The unique initiative would make use of the country’s 200+ sugar mills, which are capable of producing “billions” of liters of botanical water for underprivileged communities, free of cost.

“We invite NGO’s, charities, governments, beverage companies or even individuals to work with us in their local communities to bring our Botanical Water to them by building processing capabilities around the world,” Paule said.

“It may, in fact, be up to three trillion liters in the future once the world embraces our new technology and truly understands its importance,” Paule added. “That’s an enormous amount of natural drinking water from a new sustainable and renewable source that is currently being discarded. We are clearly now at a tipping point as the world starts to make this discovery.”

Aqua Botanical is available online in Australia and is set to launch in Woolworths supermarkets nationally next month.