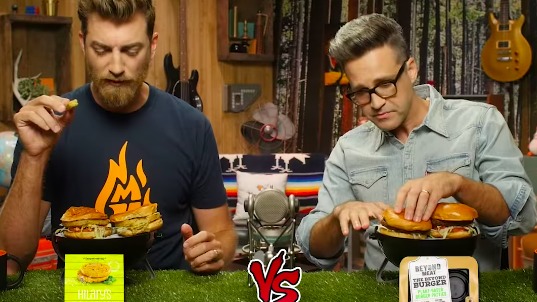 It’s no easy task in today’s booming vegan market, but a winner in the Best Vegan Burger contest has been crowned. That is — if you consider comedy duo Rhett and Link’s opinions crown-worthy. Will the winner surprise you? Probably not, but it’s still worthy of four minutes of your life.

In a recent Facebook video titled the “Best Veggie Burger Ever,” the duo, whose names are Rhett McLaughlin and Charles “Link” Neal, put several leading veggie burgers to the test. Eight burgers competed, but only one could be called the best.

Round 1: Boca’s All-American versus Morningstar’s Vegan Burger. Boca takes the crown for its meaty-like texture.

Dr. Praeger’s California versus Amy’s Sonoma. It was the battle of the California burgers but despite Praeger’s doctor credentials, his “green and mushy” burger wasn’t enough to beat Amy’s.

Hilary’s Best Veggie Burger versus the Beyond Meat Beyond Burger. It’s hard to imagine any burger standing up to the popular Beyond Burger, and Hilary’s was no exception. Link called Hilary’s “almost unswallowable.” Beyond Meat took round one.

Final round: By now, it seems clear Rhett and Link are on the Beyond Meat train, calling it a “magical achievement,” and “greasy in a good way.” Rhett even notes that he’s eaten “way beyond” the amount of the burger he thought he would given he’d already eaten several burgers in previous rounds. But the duo, like the rest of the country, can’t seem to get enough of the Beyond Burger. It’s crowned the victor.

Rhett and Link are certainly in good company as fans of the Beyond Burger. The meaty burger that looks, cooks, and tastes like a beef burger has been winning over flexitarians and devoted burger lovers across the globe since launching in 2016. Earlier this year Beyond Meat reported selling more than 11 million Beyond Burger patties since they launched two years ago.
The burgers can now be found in supermarkets and restaurants across the country and around the world. The burgers have been building a following in Hong Kong since launching there last year. They most recently were added to Tesco supermarkets and Honest Burgers in the UK.