YouTube comedy series Good Mythical Morning, hosted by Rhett and Link, recently posted a video showing fans how to create their own vegan options at fast food restaurants. The video was shared online to more than 13 million subscribers.

While the duo are not vegan themselves, they decided to ‘hack’ fast food “as a public service to vegans everywhere”.

The 14-minute video clocked up more than 900,000 views in one day. Overall, the amount of times their channel, described as a “daily morning talk show”, has been viewed exceeds four billion.

In the segment, Rhett and Link use products from Arby’s, Wendy’s, and McDonald’s to form vegan variations of the fast food classics. They name it “fast food secret menu hacks, vegan edition”, with the aim to “make fast food vegan and delicious”.

They remind viewers that “nothing that has been made from or squeezed out of any animal is allowed”.

For their Arby’s creation, the pair aim to make an ‘Arby’s Vegan Loaded Crostini’. They explain: “Arby’s is classically known for one thing; having the meats but today the meats will not be had”.

Rhett and Link combine Arby’s potato cakes, the salad from a burger (lettuce, tomato, and onion), red and yellow roasted peppers and jalapeños. The pair use Arby’s red ranch sauce, which is free from animal products, in place of the traditional balsamic vinaigrette of crostini.

The duo also got creative with ingredients from Wendy’s and McDonald’s, though both meals included the use of kitchen items, such as a blender. Therefore, viewers aiming to attempt the remakes would be best buying the food and bringing it home.

The ‘Wendy’s Dave’s Vegan Burger’ is made using the Power Mediterranean Chicken Salad, without the chicken or feta, a baked potato with chives, and burger buns. 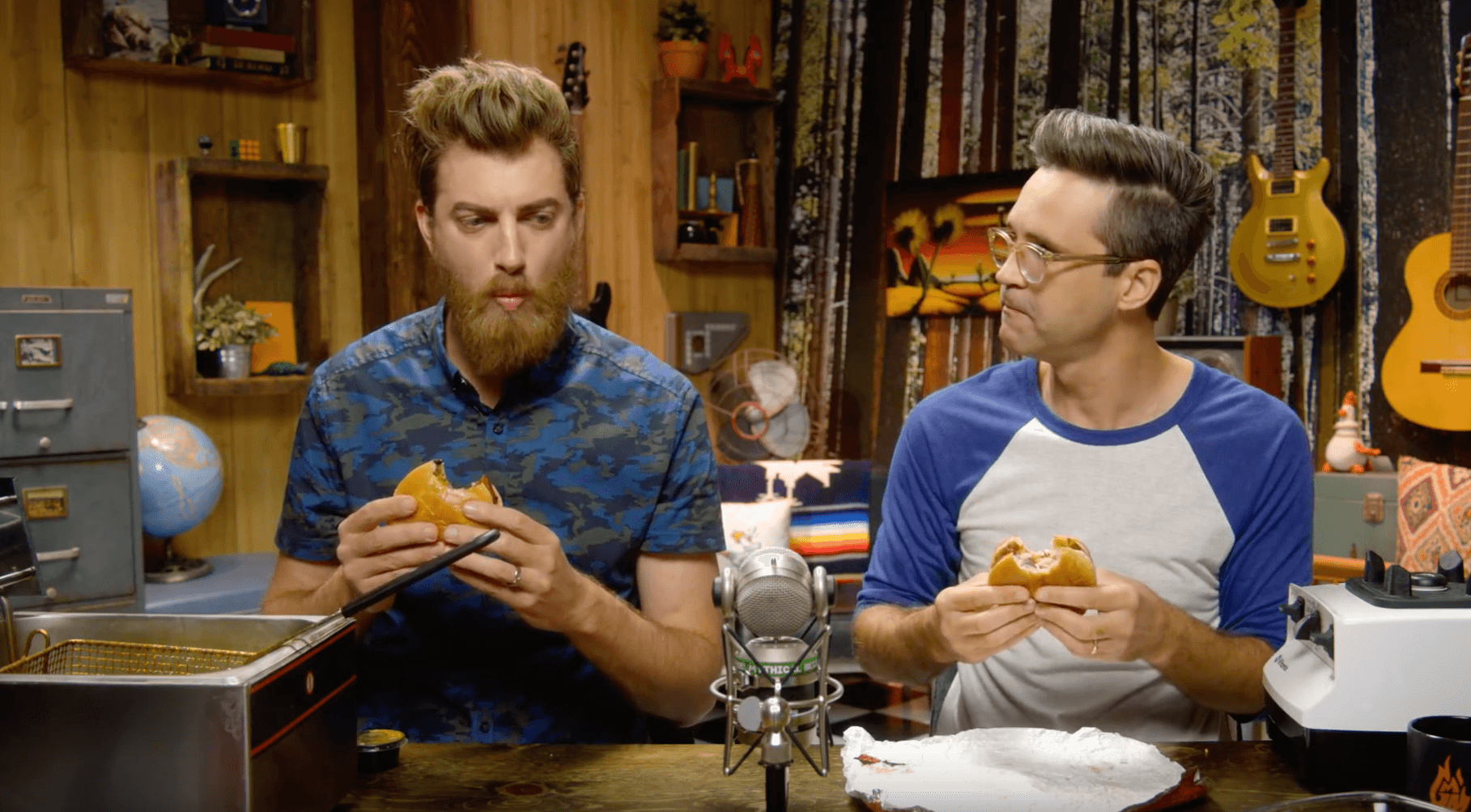 “You could lure a vegan into a Wendy’s with one of these.”

Lastly, the team tried a McDonald’s creation. McDonald’s restaurants in Sweden recently launched the McVegan, a burger completely free from animal products. This dish has not yet expanded to the U.S., though it received positive feedback.

They decided on a ‘McDonald’s McVegan McCoffee McShake’, which is made using a black iced coffee, two apple pies, (“which, yes, are vegan because they use vegetable oil and no butter”), and hot cake syrup. Link described: “this is the most amazing thing I’ve ever created”.

“The vegans are lining up outside, Rhett”.

“Here’s to you, vegans,” the duo concluded, while praising those who are vegan for their “principled choice”.