The new meat-free sausages are made from soy protein and will be sold alongside Richmond’s chicken and pork ranges in supermarkets, according to Convenience Store UK. A brand representative confirmed to LIVEKINDLY that the sausages are vegan.

”Richmond is one of Kerry Foods’ longest-standing brands, but we’re constantly looking for ways to innovate and meet the demands of consumers,” said Dawn Spencer, director at Kerry Foods.

Kerry Foods, which owns meat snack brand Mattessons in addition to the UK’s leading sausage brand Richmond, revealed in a financial meeting last February that it was working towards making meatless meat.

“We are very much in the process of, I would say [the] early stages of launching, a significant drive forward into the whole meat-free area,” Kerry Foods CEO Edmond Scanlon told Just Food earlier this year.

“[It’s] certainly an area we see our consumer foods business participating in, very much supported by our technology capability we have within our taste and nutrition business. We feel that’s a good approach,” Scanlon continued. “We feel the technology we have and are going to be deploying will be very much best-in-class, both from a taste and functionality perspective. We’re focusing on the flexitarian consumer that likes the taste and texture of meat while looking to cut down their overall meat intake.” 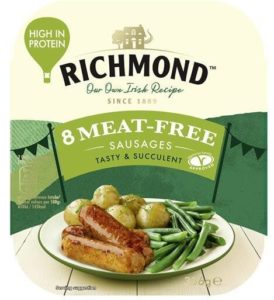 Richmond will stage its vegan sausages next to real meat.

Flexitarianism in the UK

The mainstreaming of the “flexitarian” diet has given way to the launch of a number of new vegan products in the UK. The nation launched more vegan products than any other country last year, according to data from Mintel. One in six new product launches were plant-based, signaling that vegan food is in high demand.

Dr. Geoff Bryant, technical engineering director at long-standing vegetarian brand Quorn said in April 2019, “We’ve gone on a journey with Quorn Foods, originally advertising the food to niche audiences such as vegetarians and sportspeople. Now we’ve moved into a more mainstream category due to the fact that it’s convenient and affordable.”

Later that year, the company announced that it would pivot toward a fully vegan range to meet consumer demand.

It’s possible that the Kerry Foods has considered dabbling in the vegan meat market for some time. The company released a report from August 2018 revealing that 71 percent of consumers think plant protein is healthier than animal-based protein. It followed a report by the Agriculture and Horticulture Development Board that expressed concern over the “disproportionate amount of media attention” toward veganism.