Comedian Ricky Gervais has spoken out against horse-racing following the death of Up for Review, who was killed after suffering an injury at the 2019 Grand National last Saturday.

“Why would you gamble with a horse’s life for fun? #YouBetTheyDie,” the 57-year-old “After Life” star and creator wrote to 13.2 million Twitter followers.

Founded in 1829, the Grand National horse race is considered a British cultural icon, much like The Kentucky Derby in the US. The event attracts viewers who would not normally watch horse racing. Eighty-two horses have died since its inception.

International animal rights organization PETA (People for the Ethical Treatment of Animals) notes that the Grand National is one of the world’s deadliest courses. Synchronised, a Thoroughbred racehorse, died seven years ago in 2012. He was killed — the Telegraph called it “humanely destroyed” — after suffering a fractured leg.

Why would you gamble with a horse’s life for fun? #YouBetTheyDie pic.twitter.com/Jej3fdYZPL

“The fact that it’s a cause for celebration when no horses die during the Grand National says everything that anyone should need to know about this event and the horse-racing industry generally,” PETA director Elisa Allen said prior to Up for Review’s death.

Up for Review fell at the first fence, reports the Manchester Evening Standard, prompting ITV to broadcast the race starting from the second jump. He was “euthanized” after. The practice of killing racehorses with fractures or broken legs. Depending on the severity, issues may arise due to the horse not staying still, infection, and lack of circulation, according to How Stuff Works.

Horses can adapt to prosthetic legs, given their caretaker’s willingness to pay for the operation and treatment. But horse-racing is for the financial benefit of the “owner,” so injured animals are typically treated as disposable commodities. 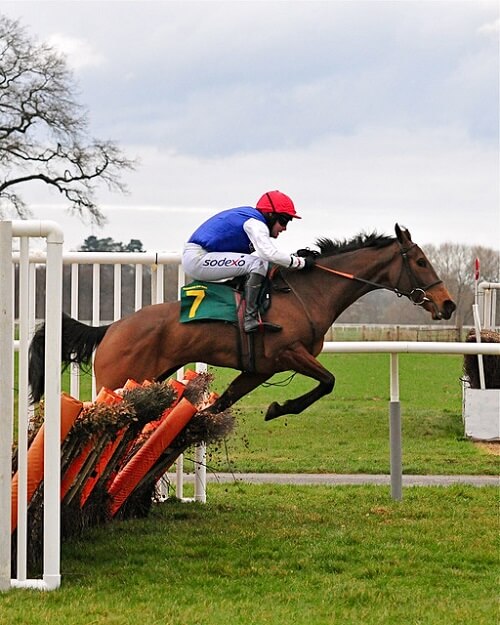 Horse-racing is a deadly sport | image/vegaseddie/Flickr

“Forcing horses to run at breakneck speed around a course deliberately designed to be hazardous is, as we’ve seen, a recipe for disaster,” Allen continued. “Those who don’t suffer heart attacks – or sustain horrific injuries when they crash face-first onto the track – may develop debilitating medical conditions, including bleeding lungs and gastric ulcers. If they make it to ‘retirement’ age, many are discarded like used betting slips – handed over to rescue charities, shot at stables, or sold for their flesh.”

Gervais regularly uses his platform to raise awareness of animal rights issues. The vegetarian comedian has spoken out against animal testing, trophy hunting, fur fashion, and animal cruelty in the name of “tradition.”