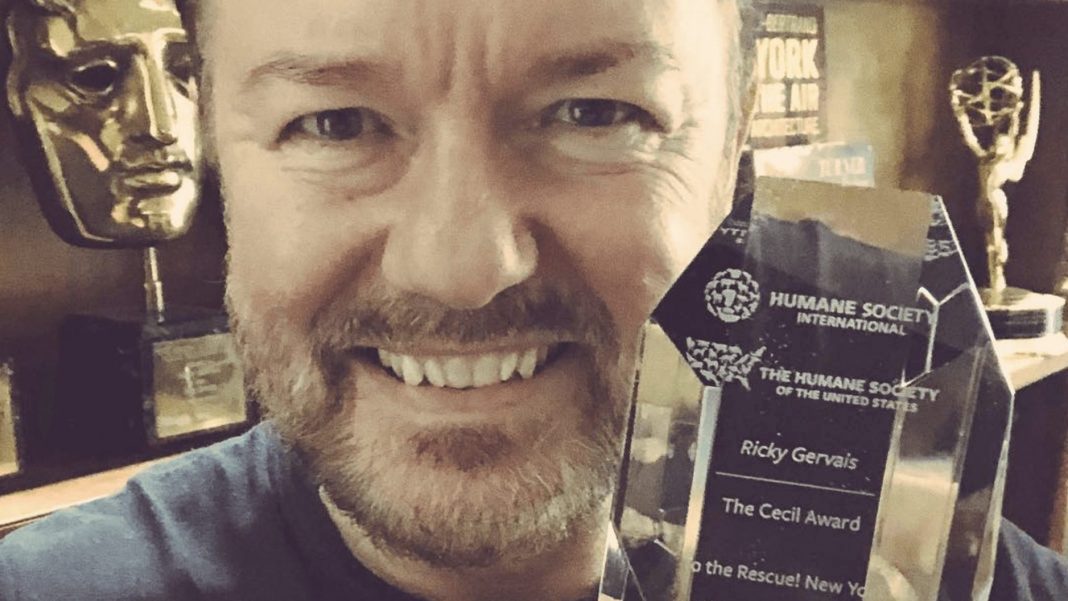 The Golden Globe and Emmy award-winning celeb received the first ever “Cecil Award,” which was created to commemorate Cecil, a well-known Zimbabwean lion killed in 2015 by an American trophy hunter. In a statement, The Humane Society’s U.S branch (HSUS) said the killing prompted “a global furor against this senseless ‘sport’.”

The organization lauded Gervais as one of the “most prominent voices heard globally” on the issue. When the news of Cecil’s death went viral, the actor took to Twitter and shared with his millions of followers a picture of Cecil alive, and the words “I am struggling to imagine anything more beautiful than this.”

Since then, Gervais continued to speak out against trophy hunting, most recently slamming the shooting of a family of baboons in Namibia. According to HSUS, “Ricky’s voice has continued to reach out to his millions of fans… elevating the work we do in raising global awareness about trophy hunting, mobilizing the shock and outrage felt by millions… and adding to the momentum to ending it for good.”

Kitty Block, president and CEO of HSUS added, “When I think of those who have effectively used their platform to speak out on behalf of animals, Ricky Gervais is at the top of the list. He doesn’t shy away from calling out cruelty in its most entrenched forms, and I cannot think of a better example of this than after the killing of Cecil.”

Via social media, Gervais thanked the group for the “lovely award” and said it would “take pride of place” on his award-filled shelf.

Thanks again for all your amazing comments about #Humanity on Netflix STILL flooding in! And thanks even more for always supporting the animal welfare stuff I bother you with. ?

HSI replied on Twitter, “You’re so very welcome… Our Cecil Award couldn’t have gone to a more worthy recipient.”

It added, “The fight against trophy hunting… has become tougher over the past two years… But there is also much to celebrate… With prominent individuals like Ricky Gervais….embracing our cause, the wind is at our backs.”

Gervais also previously partnered with HSUS to speak about issues of cosmetic animal testing, the dog meat trade, animal entertainment, the fur trade, and the importance of dog adoption.

Major fashion brand Gucci was also honoured at the HSUS “To the Rescue!” annual gala. The brand received the Corporate Consciousness Award in recognition of its move away from using fur and angora wool in its designs.