The dark comedy web series — which Gervais created, executive produced, directed, and starred in — tells the story of Tony, who lives a perfect life until his wife passes away. He considers suicide but decides to live long enough to “punish” the world by saying and doing whatever he wants.

Some speculated that Gervais broke his vegetarianism during the filming of the show since one scene shows Tony eating fish fingers. In a recent “FAQ” on Instagram, the creative debunked the rumors.

“The beach scene was filmed at Camber Sands. The dog is not mine in real life. Yes, it really was that sunny every day in England. The fish fingers were vegan. No, I didn’t just wear my own clothes. But I did keep them after,” the entertainer wrote.

Gervais managed to integrate his plant-powered lifestyle into the show in other ways, too. The series begins with Tony eating a vegetable curry and feeding his dog a tin of beans.

#AfterLife FAQ The beach scene was filmed at Camber Sands. The dog is not mine in real life. Yes, it really was that sunny every day in England. The fish fingers were vegan. No, I didn't just wear my own clothes. But I did keep them after ?

Gervais has long spoken out about animal welfare issues. Earlier this month, in an interview with BBC Radio 5 Live, Gervais broke down why animal testing is cruel and unreliable in less than one minute. “It doesn’t work. Ninety-three percent of all experiments that work on animals then fail and are dangerous on humans, because the models don’t work,” he said.

Gervais has taken a public stance against trophy hunting, the fur trade, and the Yulin Dog Meat Festival.

His love for animals is clear even on “After Life,” where Gervais is seen sharing a close bond with his character’s dog. Speaking to Radio 5 Live, Gervais said that when closing up the show, he almost cried when saying goodbye to the dog that had acted as his pet for six weeks. 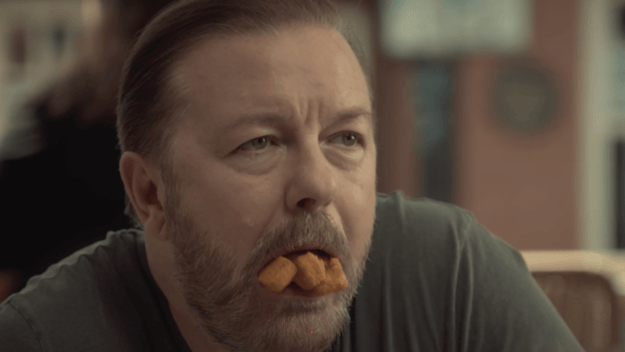