The comedian and animal rights activist recently spoke to the Hollywood Reporter about how he’s coping with not being able to go outside and socialize. Despite having to cancel his world tour, he says he’s handling the situation pretty well.

“I’m doing absolutely fine,” he told the publication. “You won’t hear me complain when there are nurses doing 14-hour shifts and frontline workers risking their own life.”

He added: “I’m in a nice house with a garden. I live in an area where there’s a lovely big heath that my girlfriend and I walk on every day and where now I say hello to dogs from a distance.” 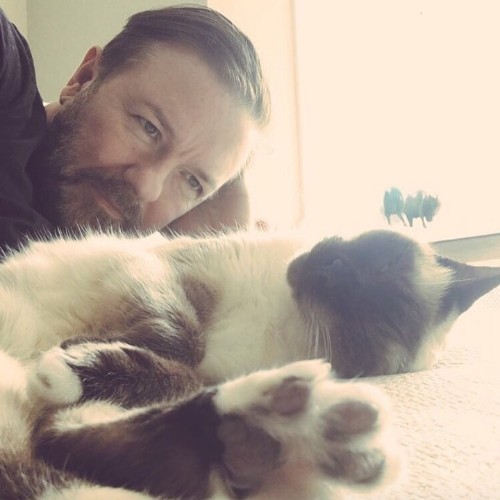 Speaking Up for the Animals

Aside from working, cooking, and exercising more than usual, during lockdown, Gervais has been encouraging people to eat fewer animal products. He’s also been speaking out against the wildlife trade.

Experts believe the coronavirus came from Huanan Seafood Wholesale Market in Wuhan, China, a wet market with a separate section for wildlife.

After reviewing footage of a similar market in Indonesia, Gervais told the Mirror in April: “we can’t carry on exploiting animals, eating wildlife, and trashing the planet.”

He added: “the wildlife trade and markets have to close. Otherwise, it will be a case of when, and not if, we have another global pandemic.”

Earlier this month, he discussed his love of animals on fellow comedian Russell Brand’s podcast “Under the Skin with Russell Brand.”

“I’m in awe of an animal… we’re just part of nature.” He added, “we’re nothing special. We’re not as important as bees.”