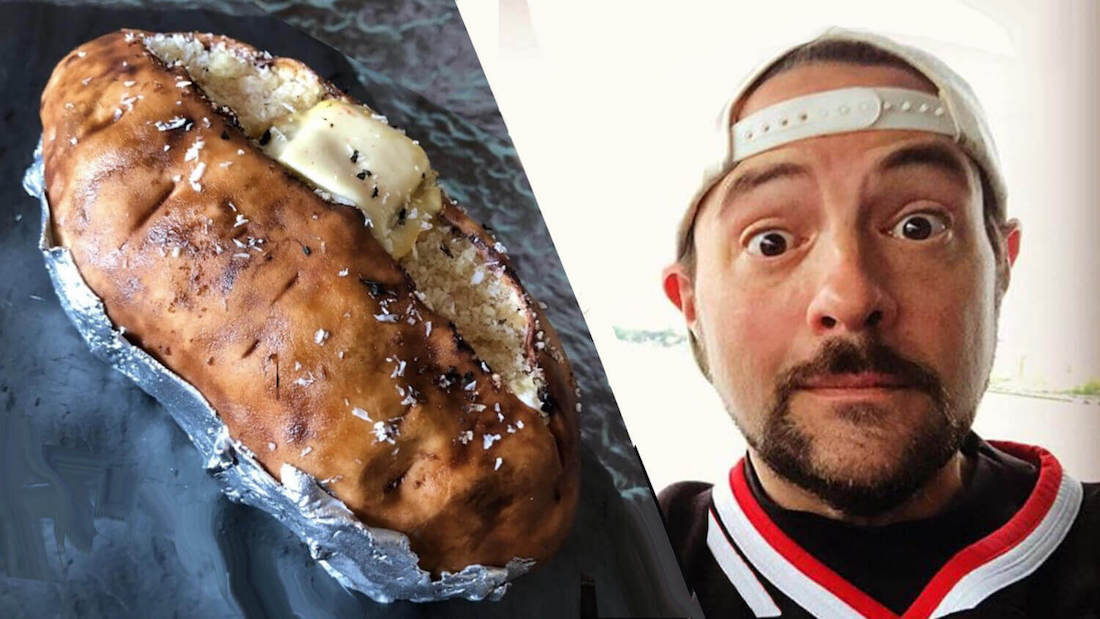 Actor, comedian, and producer Kevin Smith has become a relatable and familiar voice for the vegan movement. Although recognized for his film and television credits, the entertainer has created a new identity surrounding his recent weight loss and vegan journey. Case in point: during a recent stay at the Ritz Carlton Sarasota in Florida, the hotel manager left him a vegan chocolate cake expertly decorated to resemble a baked potato. Talk about celebrity perks.

Smith thanked the hotel manager via Twitter. He shared two pictures of the elaborate cake, along with a bit of backstory. Smith originally went vegan to kickstart his new weight loss program, which was prompted by a sudden heart attack in February – he was only 47. He was inspired by the famous illusionist Penn Jillette’s self-help book, “Presto!: How I Made Over 100 Pounds Disappear.” Smith adopted the all-potato diet for two weeks, as the book suggested, and it worked. Smith lost 17 pounds in the first 9 days, well on his way toward his 50-pound weight loss goal.

Shout out to the @RitzCarlton in #Sarasota & manager – who heard me on the @joerogan podcast talking about how I ate baked potatoes to kickstart my weight loss. When I checked in 10 days ago, I found this treat waiting: a vegan chocolate cake designed to look like a baked potato! pic.twitter.com/Nv7R2K3MdH

On a podcast episode of The Joe Rogan Experience, Smith spoke at length about his potato experience. The Ritz Carlton hotel manager was a fan of the episode, and when he learned that Smith was staying at the hotel, he had the culinary team prepare a vegan baked potato cake in time for his arrival. So much for tiny chocolates on the pillows. This is a gesture of true hospitality.

Although Smith is no longer subsisting off potatoes, he has held firm to his vegan diet. He regularly posts about the plant-based lifestyle, highlighting vegan restaurants and openly discussing his weight loss and overall improved health. And while focused on eating whole foods and staying lean, he is not so strict as to pass up some vegan indulgences, including this epic personalized cake.