Dubbed “The Roger,” the vegan shoes are the Swiss professional tennis player’s first foray into sneaker designing. And while The Roger is On’s second lifestyle shoe, it’s the first time the brand has produced a tennis-inspired shoe.

Made with vegan leather, the sleek, white unisex sneakers have clean lines and a minimalist design.

They also feature the brand’s bubble-like CloudTec soles and signature Speedboard. The latter is a liquid-injected plate of thermoplastic polymer. It’s placed in the soles of the shoes to improve a runner’s agility.

While the shoes feature performance technology, Federer says they weren’t made for the court.

“It’s not for tennis, it’s for the street,” he told Vogue. He added: “I hope it’s a shoe you can wear every day, sort of like your watch—something that’s so comfortable, you want to wear it all the time.”

The first 1,000 pairs of The Roger will be released through an online raffle via On’s website. Federer said more opportunities to purchase the shoes would be possible in the future. 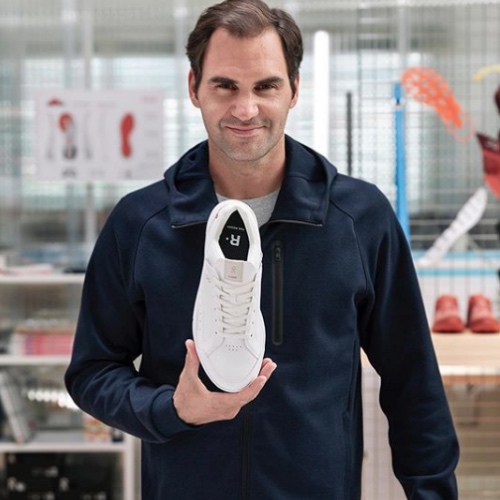 The new tennis-inspired sneakers are made with vegan leather. | Roger Federer

According to a study by Infinium Global Research released earlier this year, the vegan leather industry is booming. The market is projected to be worth $89.6 billion by 2025. The report also found it will have a compound annual growth rate of 49.9 percent from 2019 to 2025.

On’s co-founder David Allemann told Vogue that one of his long-term goals is to use more natural, bio-based materials.

“If you’re making a technical sneaker, you can’t compromise on performance, but how can you make it fully sustainable?” he said. “That’s what everyone in the market is working on. It’s a race in and of itself.”