After being contacted by animal rights activists, the Rosewood London Hotel will no longer keep caged birds on its premises.

The hotel originally kept six finches and one budgie, a long-tailed parrot, caged in its lobby.

A concerned supporter brought the caged birds to the attention of animal rights organization People for the Ethical Treatment of Animals (PETA). The group subsequently contacted the hotel to explain how stressful the hotel may be for the birds.

In a statement, PETA said it informed the hotel that loud noises, bright lights, and disruptions by guests can upset the birds. This, in turn, could “depress their immune systems.”

After learning this, the hotel allowed the group to transfer the birds to an Essex sanctuary.

Mike Bonner, the hotel’s director of sales and marketing, told LIVEKINDLY: “the birds were rehomed to a sanctuary earlier this year and we wish them a happy life in their new home.”

“By removing caged birds from the hotel lobby, Rosewood London has set a positive example for luxury hotels around the [world],” PETA’s campaigns officer, Theodora Iona, said in a statement. “This decision sends the message that birds, like all wild animals, are born to be free and that treating living, feeling beings as decorative props will not be tolerated.” 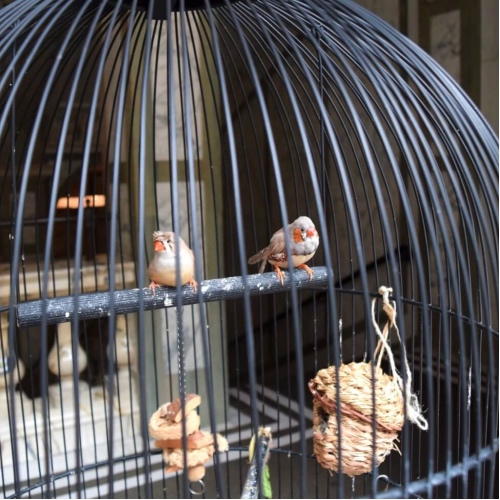 Similar to other captive animals like elephants and tigers, captive birds suffer numerous physical and psychological ailments as a result of being caged.

Captive birds may suffer from malnutrition due to an improper diet. Being confined in unnatural living arrangements may also lead to stress and behavioral issues.

Dr. James Serpell, a zoologist at the University of Cambridge, says captive birds may suffer from zoochosis. Zoochosis refers to the stereotypical behaviors of animals in captivity.

Abnormal behaviors include repetitive movements like head bobbing or weaving or constantly shifting from one foot to the other. Captive birds may also pluck out their feathers due to boredom or stress.

“A lot of them become quite spiteful,” Dr. Serpell told the New York Times. Captive birds like parrots may “solicit someone to come groom its head and then suddenly reverse itself and bite [them],” he added.