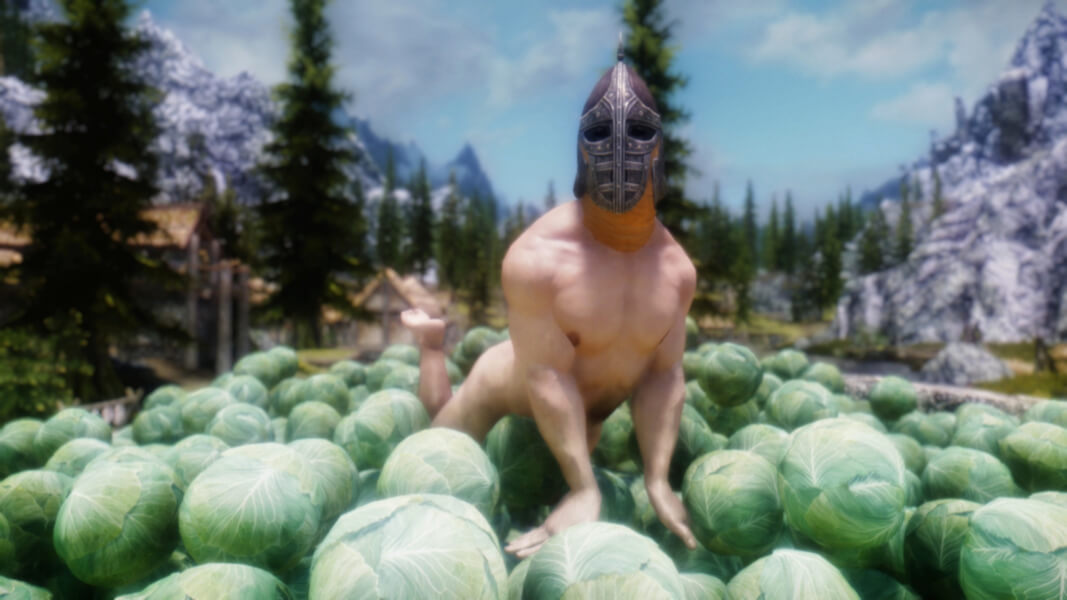 Is it possible to finish Bethesda’s award-winning RPG The Elder Scrolls V: Skyrim as a vegan character? Just about. PCGames author Cian Maher gave it a try with a run as a cruelty-free high elf named Joaquin, perhaps a nod to the vegan actor, and documented his attempt.

Maher started the game by opting for the Imperial faction over the Windhelm-based Stormcloaks, “as the Stormcloaks quite literally wear dead animals at all times.”

Right at the start of the game, he encountered an ethical dilemma that would make life in the mythical land of Skyrim difficult for Joaquin the high elf. “In fact, after equipping armour to [fulfill] Skyrim’s tutorial, I immediately stripped naked,” he wrote. “All armour in Skyrim requires leather strips to craft, and as a vegan, leather was a definite no-no.” Vegan leather just doesn’t exist in the Skyrim universe.

I’m not doing Veganuary personally, but my Skyrim character gave it a go:https://t.co/TTL4MvAstl

Maher also opted for Destruction magic over a steel sword, which would allow him to avoid killing, but would require his nude high elf to be much more resourceful in order to survive. One of the first creatures Joaquin went head-to-head with was a bear, who Maher credits with inspiring him to play a vegan character. The bear apparently didn’t realize that the high elf meant him no harm and “attempted to rip [Joaquin’s] head off.”

Is Using Potions in Skyrim Vegan?

Without Calm, a spell that comes later in the game, Joaquin had no choice but to flee. Despite being low on health, Maher opted to not stock his high elf’s inventory with potions, as in Skyrim’s mythology, “it’s a well-known fact that animal products such as blue dartwings and charred skeever hides are often used to make cheap health potions, after all.”

But, most vegans would probably have made an exception here – after all, according to The Vegan Society (the inventors of the word “vegan”), it is “is a way of living which seeks to exclude, as far as is possible and practicable, all forms of exploitation of, and cruelty to, animals.”

Many medications, including birth control, have been tested on animals, are not avoided by vegans because it’s not practical. Joaquin should have realized that his health comes first, because if he’s not healthy, how could he possibly stand up for animals?

Still, the high elf opted out of practicing the animal product-heavy art of alchemy and avoided using bone meal to make potions, as “human products are animal products too.”

When Balgruuf the Greater, a major character in Skyrim, sent Joaquin on a mandatory quest to slay a dragon, Maher obliged, justifying it with the fact that dragons aren’t actually real. Dragon soul consumption happens automatically, but the question of the ethics of eating a fictional creature’s soul remained on Maher’s mind.

Although Wood Elves have the ability to command animals, the fictional Eric of Guis wrote in the Pocket Guide to the Empire that the race is “exclusively and religiously carnivorous. They cannot, or will not, eat anything that is plant-based.”

Based on that, Maher deduced that forcibly commanding wild animals is unethical, leaving him with the option of calming animals down or fleeing battles. He spent much of the game running away from wolves and other creatures. Joaquin the vegan did end up setting a number of Dwarven Spiders, an automaton, aflame. “…I felt no remorse as I scorched their metal bodies and watched them flounder in the heat,” Maher wrote.

By the end of the game, Maher realized that he could use a sword – as long is it was a leather-free bound weapon. He managed to defeat the Dragon Priest, a powerful undead enemy (which begs the question, would killing zombies be vegan?), and jumped into the gate for Sovngarde, the afterlife wearing cruelty-free equipment that granted him 50 Magicka points.

“Now Alduin, and all of Skyrim, would know that it’s more than possible to be Dragonborn on a plant-based diet. Supplemented by the occasional soul, of course,” Maher concluded.

According to Kotaku, a mod in Skyrim lets you swim buck naked in a river of cabbage – you know, in case you really like vegetables.