Vegan celebrity Ruby Rose just hosted a plant-based barbecue with the cast and production team of “Pitch Perfect 3,” according to a recent Instagram story.

The “Australia’s Next Top Model” and “Orange is the New Black” star shared a series of videos to her 12.4 million followers. Rose also posted three snapshots to her profile, including one with her fellow Bellas (the acapella group in the “Pitch Perfect” series). She also shared loving shots of herself and her guests alongside her beloved dogs.

The actor first updated her story with a video of the plant-based Impossible Foods burgers; the background noise is filled with her co-stars cooing over the burgers that are known for appearing, searing, and tasting much like a beef patty. Rose complemented the vegan meat with a generous slice of vegan cheese, gherkin, lettuce, and tomato in each bun, much like conventional fast food chains serve. 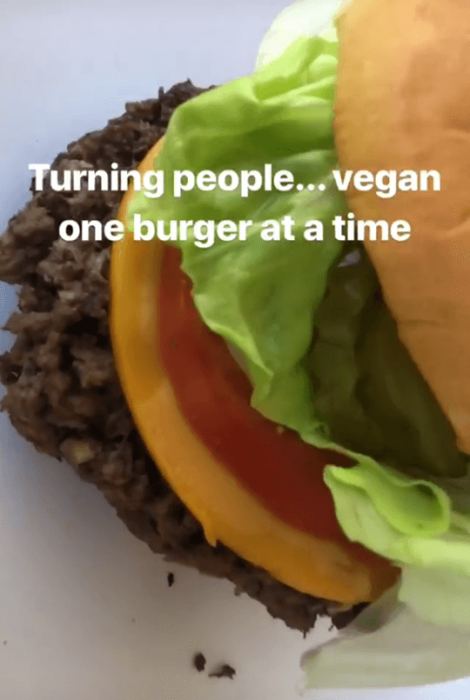 The barbecue also had Follow Your Heart‘s thousand island dressing sauce and a selection of fresh vegetables. According to the celebrities in the video, “everything is vegan,” which is unsurprising considering Rose is a longtime advocate of the plant-based lifestyle. She first began to gradually adopt the diet in 2013, and eventually became wholly vegan after surpassing hyperthyroidism issues. Just last year, she gave up wearing leather and has lent her voice to animal rights and environmental issues that can be combated with veganism since.

The Australian-born actor followed up with a casual video claiming she’s “turning everyone vegan one burger at a time.” Hairstylist attendee Riawna Capri, who was noshing on the decadent feast alongside Rose, belted: “This is Impossibly incredible!”

The star-studded guests even teased their male co-stars, who were tasked with grilling the Impossible burgers, saying that they had “Impossible ABS,” because one doesn’t need animal protein to achieve a sculpted physique.

Rose’s plant-powered barbecue comes just days after she shared another vegan-strong story on her Instagram. In a joking caption, she said “our fridge is so healthy,” as she gave a video tour around her sizable cooled food storage hub. The fridge was packed with pre-made vegan food from leading food manufacturers in the plant-based market. Rose makes a powerful statement about how plant-based food can resemble animal products and that one can live compassionately while still enjoying a plethora of not-so-healthy but incredibly ethical foods.