British comedian, actor, author, and vegan Russell Brand promotes kindness in his April 2019 book, “Mentors: How to Help and Be Helped.”

The book—a follow-up to his December 2018 book “Recovery: Freedom from Our Addictions“—speaks about the benefits of giving and receiving help.

“I have mentors in every area of my life, as a comic, a dad, a recovering drug addict, a spiritual being and as a man who believes that we, as individuals and the great globe itself, are works in progress and that through a chain of mentorship we can improve individually and globally, together,” said Brand.

In “Mentors: How to Help and Be Helped“, Brand promises to “encourage you to find mentors of your own and explain how you may better use the ones you already have.”

He also describes his own experiences mentoring others and the “invaluable” effect this has had on his journey to self-acceptance. Mentoring has helped Brand to “transform from a bewildered and volatile vagabond to a (mostly) present and (usually) focussed husband and father,” he said. 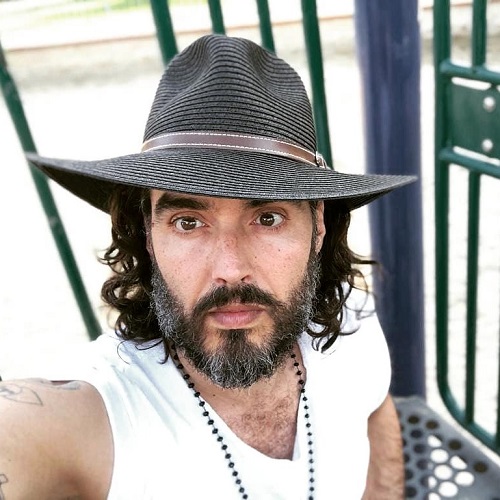 Brand has been meat-free since age 14. | Russell Brand

Brand’s philosophy of helping others expands beyond mankind, too. Brand hasn’t eaten meat since he was 14 for animal welfare reasons; “you shouldn’t eat animals, it’s mean to them.”

In 2011, he watched vegan documentary “Forks Over Knives” which explores the health impact of animal products and how plant-based foods can combat disease.

After he watched the film, he took to Twitter to write, “I’m now vegan, goodbye eggs, hello Ellen,” likely referring to talk show host Ellen DeGeneres who is also vegan.

He later mentioned, in 2014, that he needed help becoming vegan, so it is not clear whether the entertainer still adheres to a strictly plant-based diet. However, his commitment to plant-based foods has stayed strong over the years, even during his battles with addiction. In July 2018, he revealed: “Even as a junkie I stayed true to vegetarianism. ‘I shall have heroin but I shan’t have a hamburger.'”