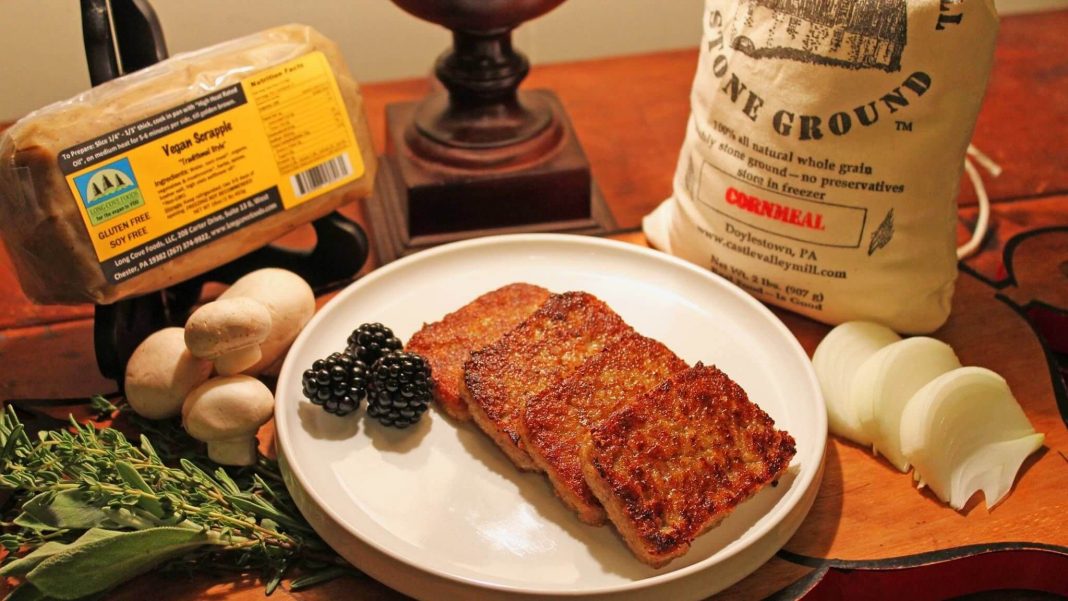 Similar to Spam, scrapple – also known as panhaas or “pan rabbit” – is a traditional Pennsylvania Dutch pork-based dish; pork scraps are mixed with trimmings and spices, and then combined with cornmeal and wheat flour.

Instead of pork, Russian Pepper’s nut-free vegan version uses shiitake mushrooms, white polenta, onions, and garlic to make what the brand believes is “even better than the real thing.”

“This recipe turns the entire concept of scrapple on its head,” notes Russian Pepper on its website. “Instead of using the lowest grade materials, such as animal offal and cornmeal, this vegan scrapple uses the highest quality herbs and spices and freshest ingredients available.”

“This vegan scrapple provides you a healthier alternative to that favorite panhaas that you may have abandoned for all the right reasons,” it continued.

Almost bought it just to amuse you pals but couldn’t do it. Ingredients sound good tho tbh. God bless this mess that is Philadelphia. #vegan #phillyvegan

Each batch of scrapple is made by hand and then sold in a one-pounder block in a number of different stores, including select Whole Foods Markets locations and Kimberton Whole Foods. The brand recommends that the plant-based scrapple is cooked in the pan for five minutes, with avocado or sunflower oil, and then served – if desired – just as the pork version would be.

“This vegan scrapple’s savory flavor and delectable texture stands head and shoulders above all others’ earlier incarnations,” says Russian Pepper. “Gone is the heartburn; vanished is dubious ‘what’s in it?’ factor; and there’s not a squeal in sight.”


The Rise of Vegan Meat

As more and more consumers ditch animal products for the environment, their health, and ethical reasons, vegan meat is becoming more popular. In fact, across the U.S., 12 percent of households now regularly purchase plant-based meat.

Even the original creator of Spam, Hormel Foods Corporation, is looking to move into the market. Meat company Applegate Farms, a subsidiary of Hormel, recently revealed it is hoping to launch more vegan and “progressive” products.

Applegate’s president John Ghingo said earlier this year, “We’re a brand that is always looking for better solutions and how do we continue to make progress. We are definitely considering creating new products.”