From brooding romantic Noah Calhoun in 2004’s “The Notebook,” to the nearly mute stuntman/getaway driver in 2011’s “Drive,” to his most recent role as Neil Armstrong in the 2018 Academy Award-winning biopic “First Man,” whatever role he turns his hand to, Ryan Gosling manages to capture the hearts of viewers around the world time and time again.

But what many may not know about the A-Lister is that his passion doesn’t just stretch to acting — he’s also a huge animal lover.

According to animal rights organization Mercy for Animals (MFA), Gosling is a hard-working animal rights activist even when he’s busy filming blockbuster movie hits. And although he hasn’t come out and publicly said he’s vegan, it’s quite possible that he is — especially when you consider how private he and partner Eva Mendes keep their relationship and family business.

But the smart folks at MFA put it all together – and when you look at all the details, it’s kind of hard to deny. “From rocking vegan leather and adopting a dog to urging major corporations to improve farmed animal welfare, Ryan is a die-hard animal lover,” writes Joe Loria.

Here are seven reasons why Gosling is a passionate animal rights advocate on the down low and why he may already follow a vegan lifestyle. 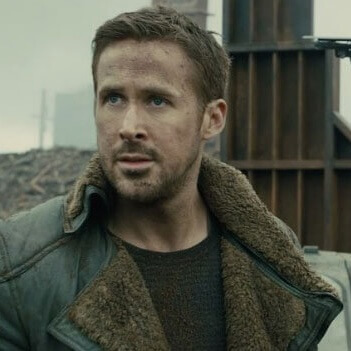 In 2017 Gosling starred in “Blade Runner 2049,” sporting a (now iconic) “shearling” coat for his role as Officer K. The jacket was so sought after that Men’s Health even wrote a whole piece dedicated to helping readers find their own version.

“Damn, the future on the West Coast looks really, really freaking cool. And that’s all because of Ryan Gosling’s coat,” the magazine wrote ahead of the film’s release, adding that the jacket alone deserved an award.

What Men’s Health may not have realized at the time — evident by the real shearling options it recommended alongside faux ones  — is that Gosling’s coat wasn’t actually made from the real deal; the actor opted for a vegan version.

Shearling is made from sheep or lambskin, which is then tanned and dressed with the wool left on. According to animal rights organization PETA (People for the Ethical Treatment of Animals), it can take dozens of sheep just to make one garment. Gosling’s number, however, required the lives of zero sheep. Created by Canadian costume designer Renée April, the shearling-style jacket was actually made using laminated painted cotton. 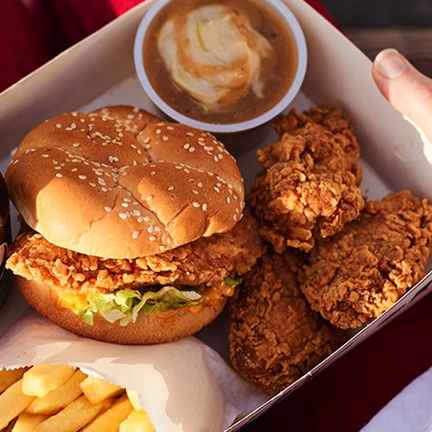 The actor urged KFC to treat its chickens better | image/KFC

Gosling isn’t just about keeping the clothes on his back kind to animals, he also believes fast food chains should be doing their bit to make their lives a little easier.

In 2003, he joined with PETA and wrote to KFC Canada, asking the fried chicken chain to try and treat its chickens at least a little more humanely.

“I understand that the chickens raised for your restaurants live their entire lives crammed into dark sheds with countless other birds and that each bird lives on an amount of floor space roughly the size of a sheet of paper,” he said in a letter addressed to David C. Novak, the CEO of Yum! Brands, one of KFC’s parent organizations.

He added, “as an advocate for the humane treatment of animals, I am writing to ask that you take steps to implement basic animal welfare standards to ensure that these animals are afforded a more humane and less painful existence.”

In 2010, he gave McDonald’s the same treatment, again questioning the chain on its abuse of chickens for its burgers, nuggets, and wraps. PETA described him as a “heartthrob with a heart of gold” for writing the letter, which focused in particular on stopping the practice of scalding chickens to death in defeathering tanks.

3. He’s Spoken Out Against Cruel Practice in the Dairy Industry 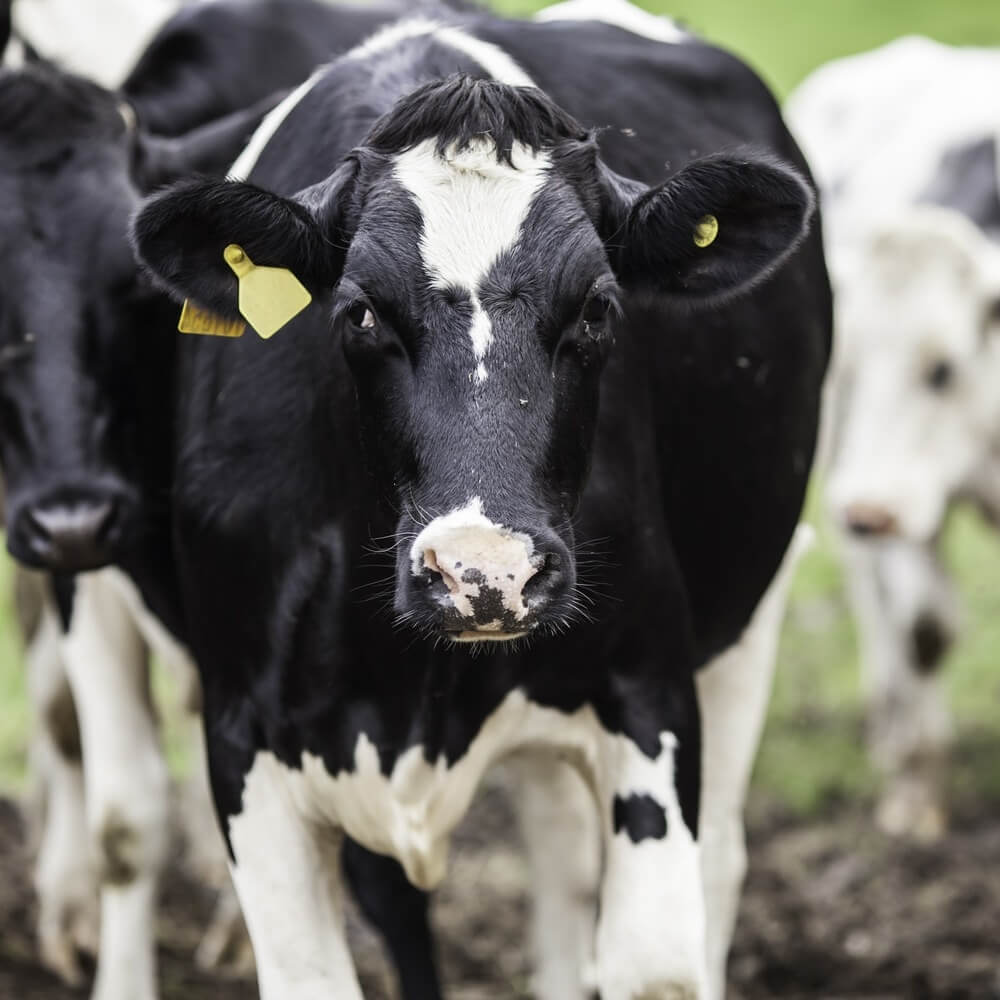 Gosling also believes the milk industry could be a lot more humane to its animals. In 2013, he wrote a letter addressed to the National Milk Producers Federation. This time, his focus was on the practice of dehorning.

Dehorning is when the fully grown horns are removed from cattle. It is a painful process, as the tissue is sensitive; according to PETA, cows often struggle in pain during dehorning. In his letter, addressed the CEO of the federation Jerry Kozak, the actor labeled the process “cruel” and “unnecessary.”

He wrote, “I respectfully urge the National Milk Producers Federation to take the lead in stopping this barbaric practice by requiring farmers to phase out dehorning by breeding for polled, or naturally hornless, cattle.”

4. He’s Written to the USDA Regarding Animal Welfare Policies 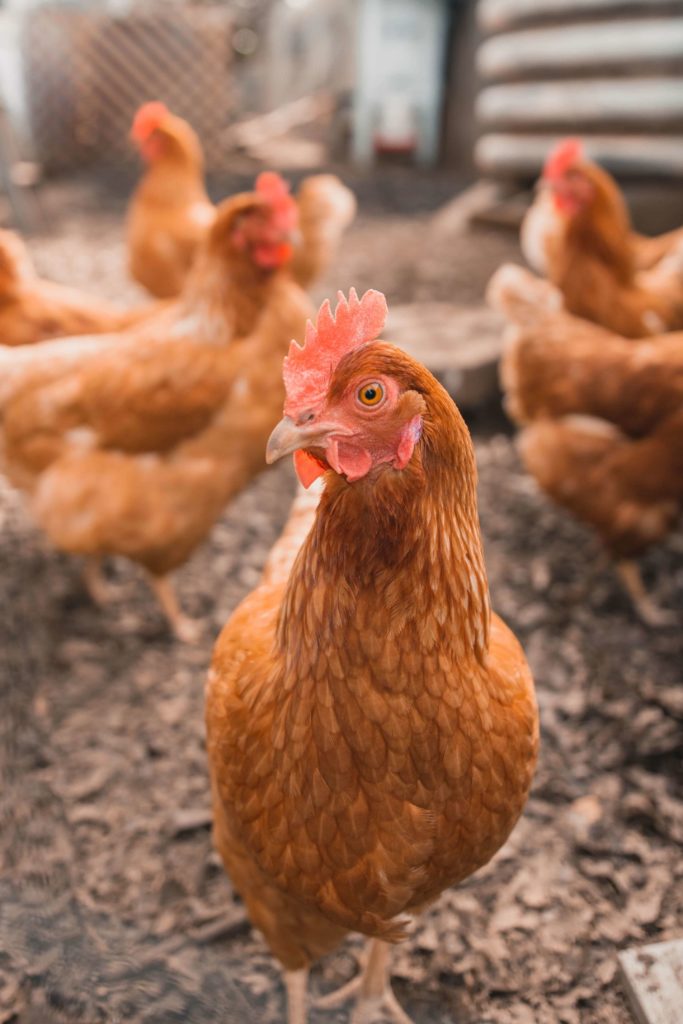 As you may have gathered by now, Gosling is all about the old fashioned method of saying it with a letter. As well as fast food chains, and the National Milk Producers Federation, The Gos has also penned a hard-hitting letter to the United States Department of Agriculture.

As with his pleas to McDonald’s and KFC, the subject of the USDA’s letter was improved chicken welfare. According to PETA, the purpose of Gosling’s message was to encourage the USDA to revoke the cruel method of foam-based extermination. As the title implies, this method of killing a chicken involves submerging them in foam until they suffocate. The organization notes that the process is traumatizing and “panic-inducing.”

In his letter, Gosling pointed out the double standards that many people have in the animal agriculture industry. They may love to pet a dog or cat, but a chicken or cow is not treated with the same love or respect. “If dogs and cats were killed in this way, the person committing these acts would be charged with cruelty to animals,” he wrote. 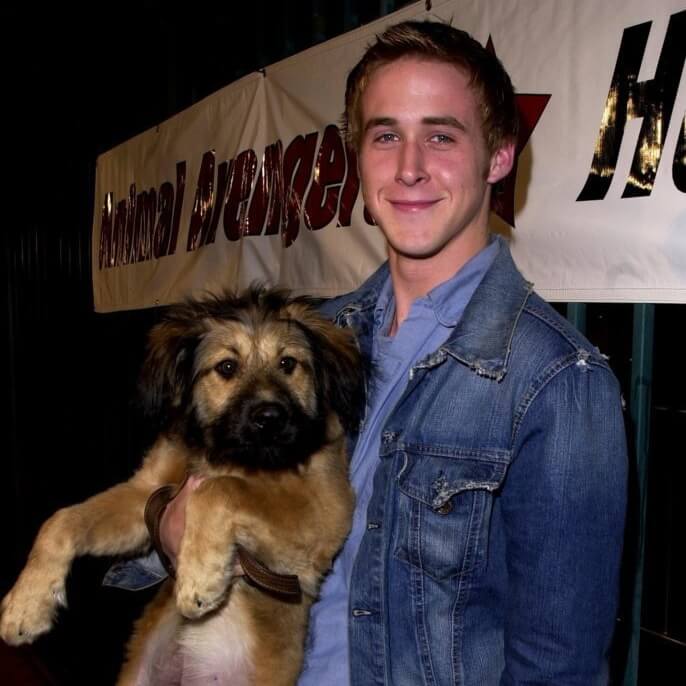 The dad of two adopted his dog George from a shelter. The pooch has since sadly passed on, but Gosling still has his dog tag. He sometimes wears the tag around his neck, proving the strong bond he had with the animal. In 2013, he gave an interview to the Independent, mentioning his dog several times. “George is way more interesting than I am, I’d rather talk about him,” he said.

He added that he considers George to be the greatest love of his life, even taking him along to some work commitments for moral support. “I wanted George here today, you know, doing interviews with me,” he told the newspaper. “Normally, I take him everywhere, I have special paperwork so he can travel with me wherever I go. Can we just talk about George?” 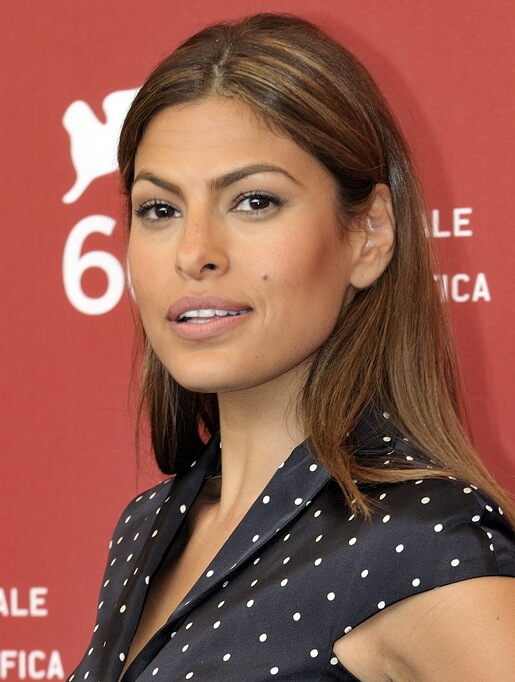 Gosling’s longtime partner and mother of his two children Eva Mendes — best known for her roles in 2005’s “Hitch” and 2011’s “The Place Beyond the Pines” (where she met Gosling) — is a vegetarian. In 2015, she explained her reasons for the lifestyle to Woman’s Health.

According to the Economic Standard, the actor told the magazine, “I haven’t eaten meat in about six years, because I don’t agree with factory farming here.” She added that as soon as she cut meat out of her diet, she felt better health-wise. “And also, after a year of eliminating it, my skin looked brighter and healthier overall,” she continued.

Mendes isn’t just about boycotting animal products on the plate, she also believes — like Gosling appears to — that they have no place in the wardrobe. She once starred in a PETA anti-fur campaign, appearing naked on a poster alongside the slogan “fur? I’d rather go naked.”

In an interview with the animal rights giant, she explained that her passion for animal rights had been strengthened by the new canine in her life. She said, “I love animals, but I hadn’t had a pet since I was a kid. I recently got a dog and he’s not only made me a happier girl — he’s made me much more sympathetic to animal rights.”

She added, “I look at my beautiful dog and think, ‘of course I’d never eat him or skin him for his fur, so why would I be okay with eating a cow or wearing a cheetah?’ It’s just not right. It’s a contradiction.”

7. He’s Been Spotted At Vegan Restaurants 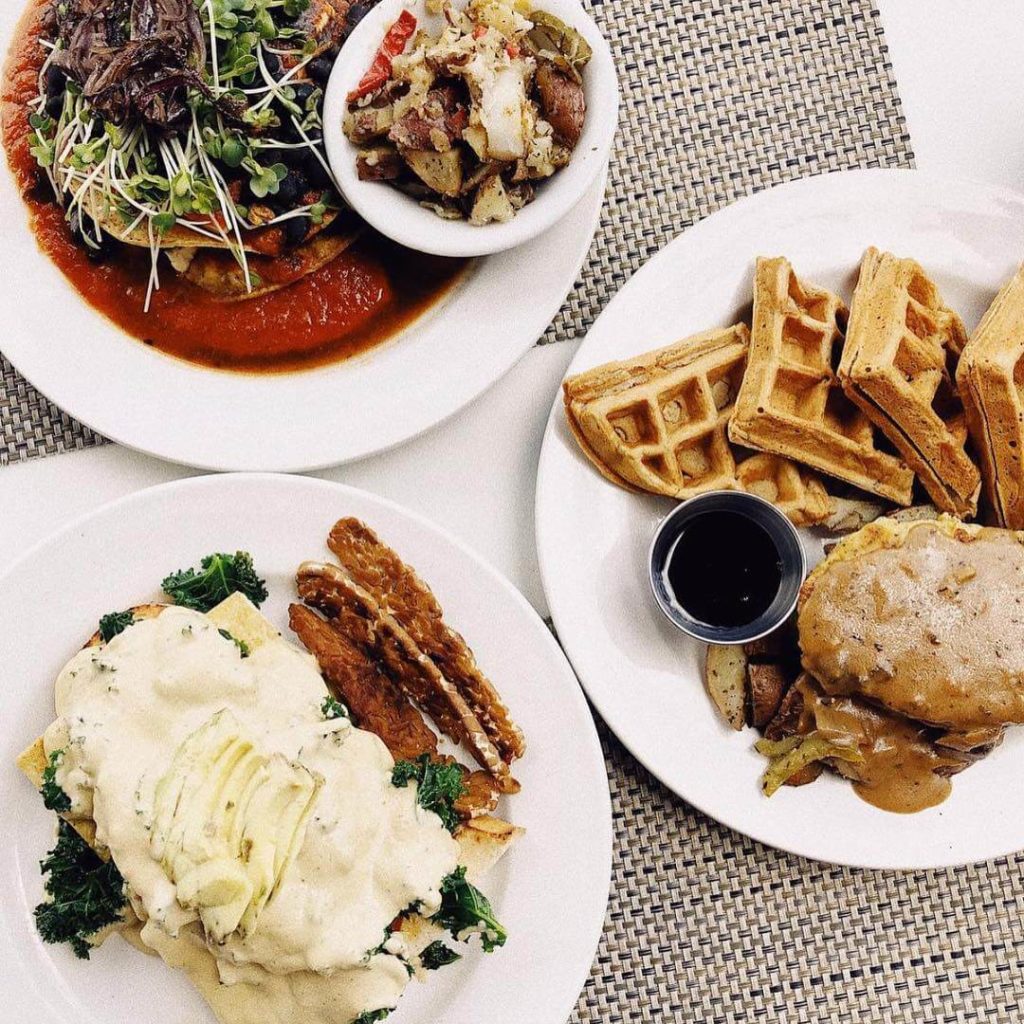 Gosling has been spotted at vegan restaurant Flore | image/Veggie Fueled

Gosling has even been spotted at the trendiest LA vegan restaurants, like Silverlake’s Flore, known for its tempeh Reuben and brunch waiting line that looks like a who’s who in Hipster-vegan-ville.

If you’re also into vegan food and want to celebrate Gosling’s compassionate, animal-loving nature in the only way you see fit — with a movie marathon of his biggest films — then keep your eye on the Chocolatician’s website for the perfect vegan chocolate version of the actor’s head. Yes, you read that correctly.

Earlier this year, chocolatier Jen Lindsay-Clark molded Gosling’s head out of dairy-free dark chocolate, making the perfect vegan snack to enjoy while you dance around to 2016’s “La La Land” or laugh at 2011’s “Crazy, Stupid, Love.”  You’ll have to keep an eye on the company’s website though to see if it restocks, as the section named “Chocolate Gosling” is currently empty.