The first-ever citywide vegan burger contest is set to take place in Sacramento, California. Spanning the month of June, The Great Sacramento Vegan Burger Battle will invite local chefs and restaurants to create a vegan burger that will wow taste buds.

Vegan burgers in Sacremento’s veggie burger contest will be submitted to a variety of categories including Beyond Burger, Impossible Burger, Housemade Vegan Burger, Portobello Burger, and Oil-Free Vegan Burger. All buns and condiments must be confirmed to be vegan in order to qualify for the contest and vegan sides will be available. Event organizers have confirmed over 30 participants so far and note that more are on the way. The event comes from the founders of the Vegan Chef Challenge, an organization created to bring veganism to the mainstream.

Residents of Sacramento are being invited to sign up for “Tasting Teams,” or teams of two or more people who will sample vegan burgers on the given menu of a restaurant group for the month of June. Diners, along with the Sacramento Vegan Burger Challenge taste-test team, will then vote on their favorite vegan burgers across the different categories. 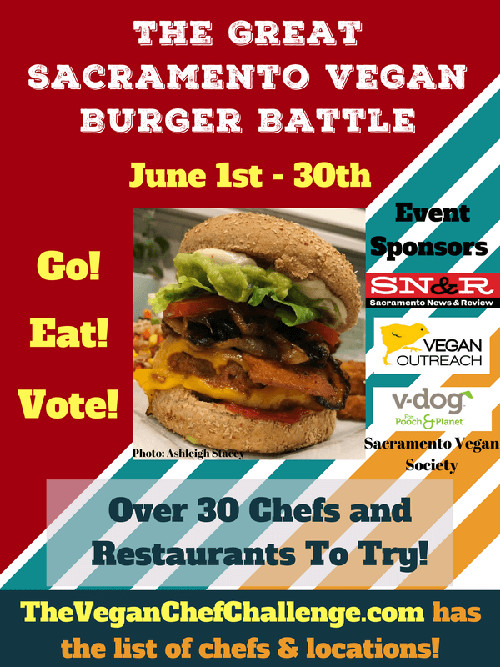 It’s not only California vegan burger joints that are being invited to participate in the challenge. Event organizers are welcoming both vegan and non-vegan contestants. Sacramento’s Federalist Public House, Broderick Roadhouse, The Shack, Pho Fresh, and Kasbah are among the participants that have been announced. The event is sponsored by non-profit organization Vegan Outreach, local vegan meetup group Sacramento Vegan Society, V-Dog vegan dog food, and local news source Sacramento News & Review.

A full list of chefs and restaurants who have currently signed on to the Sacramento Vegan Burger Battle can be found on the event’s official Facebook page, though event organizers have noted that new participants may still be announced. Any restaurant, vegan or omnivore, is welcome to participate in the contest as long as the burger is vegan.

Vegan burgers aren’t just big in Sacramento. Restaurants across the nation are adding plant-based burger to the menu, including popular chains like White Castle, Bareburger and T.G.I. Friday’s