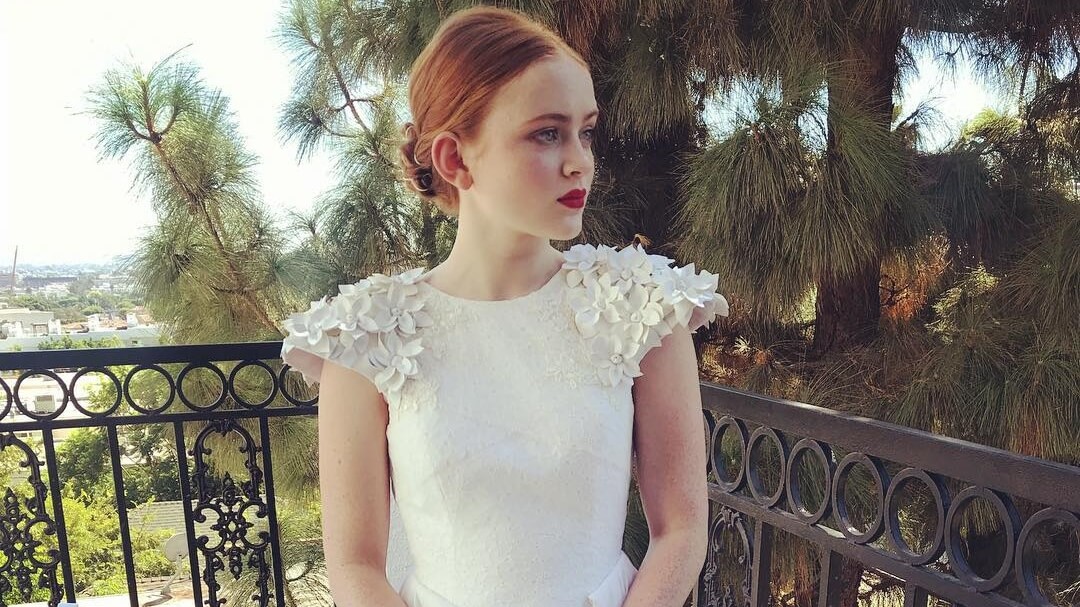 The sixteen-year-old activist wore a unique, cotton poplin gown made by the LA-based brand, which featured a floral lace overlay embellished with intricate white floral appliques on the sleeves, handmade from vegan leather. Sink also wore a spring-summer 2019 ruffled cream Hiraeth frock underneath a black faux-leather harness and moto boots to the Netflix pre-Emmys party.

“I have always admired Rooney Mara’s personal style, so I completely trusted her vision for this look,” Sink’s stylist, Molly Dickson, told Hollywood Reporter. “We started a conversation with Rooney and the Hiraeth team a couple months ago. Sadie is vegan and Hiraeth is a vegan line, so it just seemed like an organic collaboration.”

Mara launched the fashion line due to her interest in high-end quality fashion; she sought to improve the availability of all-around ethical vegan leather pieces. She explained to Vogue, “In fast fashion, you can find faux leather boots that are really cheap, but while it’s cruelty-free in the animal sense, I didn’t necessarily know where those things were made, or if they were cruel towards humans.”

A fan of the ethical brand, this is not the first time Sink has modeled Hiraeth. The young actor sported Mara’s designs for appearances on the red carpet at both Paley Fest and the Kids Choice Awards.

The star, who was crowned runner-up in peta2’s hottest vegan celebrity awards this year, was inspired to go vegan by fellow actor Woody Harrelson. Speaking to Just Jared, Sink recently explained,  “I am a passionate vegan. I actually was a vegetarian for about a year and when I was working on ‘The Glass Castle’ with Woody Harrelson he and his family inspired me to become a vegan.“

The actor also noted that her favorite documentary is “Blackfish,” the hard-hitting exposé of SeaWorld and the animals they capture and breed; the film has effectively reduced the marine parks’ ticket sales since its release. Sink also helped to narrate the animal rights documentary “Dominion,” along with Mara and the designer’s rumored boyfriend, actor Joaquin Phoenix.