The supermarket is now taking orders for its festive menu, which will be available for customers to pick up from their local store from December 22 to 24.

A traditional Christmas dinner isn’t complete without all the trimmings. To ensure “no one misses out,” Sainsbury’s has launched a Vegan Trimmings Selection.

For the main event, the supermarket is offering a few choices. The Vegan No Beef Wellington features seitan, mushrooms, parsnip, and spinach, all wrapped inside puff pastry. There’s also a Vegan Three Nut & Mushroom Roast with Redcurrant & Port Gravy, as well as a unique Vegan Jewelled Root Vegetable Wreath with Mixed Berry Sauce.

Sainsbury’s says about the latter, “impress all of your guests with this vegan showstopper. It’s jeweled with sweet cranberries, pomegranate seeds and crunchy pumpkin seeds on a wreath of chunky butternut squash, sweet potato, and chestnut. Finish with a delicious drizzle of the sweet berry glaze. A main that everyone can enjoy!”

If you’ve got a sweet tooth, the chain is also offering a vegan dessert: Vegan Lentil, Cranberry, and Almond Melt in the Middle Pudding. 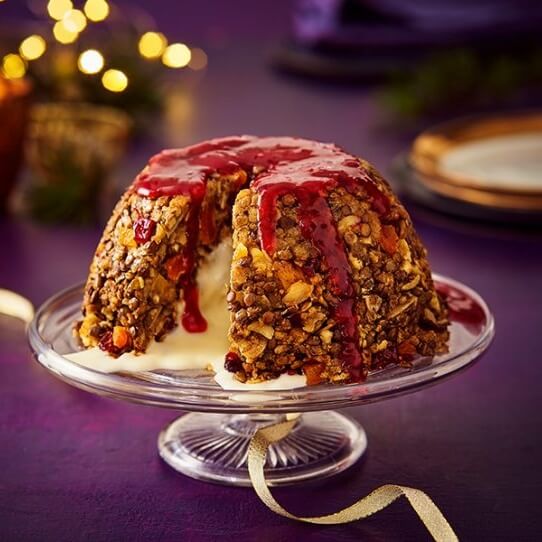 Sainsbury’s is offering a Vegan Lentil, Cranberry, and Almond Melt in the Middle Pudding for dessert.

A Very Vegan Christmas in the UK

The supermarket chain isn’t alone in launching an array of festive vegan options. Marks & Spencer has also revealed its Christmas range, which includes vegan pigs in blankets, as well as a root vegetable tarte Tatin.

Tesco’s options include a mushroom and chestnut wreath and a festive butternut squash. Aldi is offering vegan wellington and meatless duck rolls, and Waitrose will stock a Festive Ring — a wreath of vegan apple and cranberry bangers with a fruit stuffing and parsley crumb center.

Asda has also announced its festive options. The chain will offer vegan cocktail sausages and cranberry and apple stuffing balls. For dessert, it is launching a vegan gold and chocolate swirl, with caramel sauce and chocolate mousse.