LIVEKINDLY
Home Food & Health You Can Get Smokey Vegan Bacon Ice Cream at These 18 Scoop... 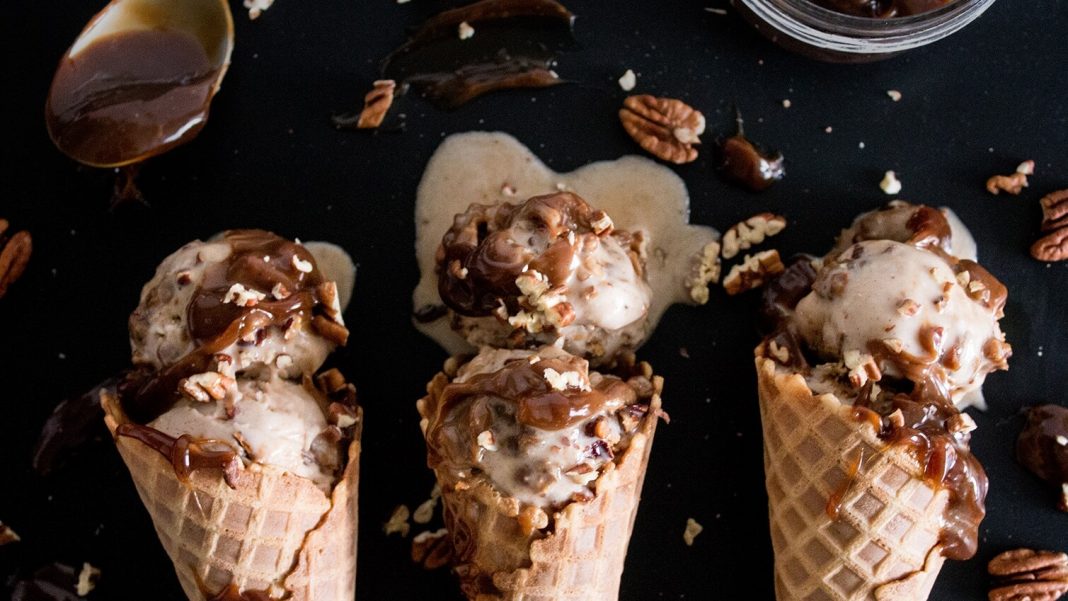 Portland-based artisan ice cream chain Salt & Straw has launched vegan smokey bacon ice cream in all 18 of its scoop shops. The flavor is part of the shop’s “Vegandulgence” line, launched to cater to the demand for dairy-free ice cream.

“As a company we wanted to share more treats with our friends who choose or are unable to eat dairy,” Ian Kane, customer support specialist and Salt & Straw told ABC7. The vegan bacon-infused flavor is called the Elvis Peanut Butter Banana Split, which features “a coconut and banana purée base with a Marion berry jam and a peanut butter bacon brittle.”

Salt & Straw used a combination of smoked tea and maple syrup to create a bacon-like flavor without meat. Other special flavors include gluten-free oatmeal moon pie with vegan marshmallow made from aquafaba, the brine from a can of chickpeas. Another new flavor is Toasted Coconut Milk and Cookies, a “coconut cream base with [toasted] coconut salted gluten-free chocolate chip cookie dough and an almond milk vegan ganache,” Kane said. Heidi Ho’s Lemon Chevre Cheesecake, another new flavor, blends cashew-based vegan goat cheese in a coconut lemon base with almond pie crust.

When it comes to choosing a favorite element of this month's The Elvis Peanut Butter Banana Split, we've gotta admit it's the crunchy peanut butter “bacon” brittle made with our own smoky toasted coconut bacon candy. No, wait, it's totally the vegan banana coconut ice cream. Oh! What were we thinking? It's gotta be the jammy marionberry preserves that turn the sweetness up to 11. Okay, okay, we can't actually choose. That's why this one is such a hit.

Salt & Straw makes its dairy-free ice cream base from coconut cream, which is said to provide a decadent mouthfeel similar to the real thing. The chain is committed to making at least 20 percent of its menu vegan.

Brooklyn-based vegan-friendly ice cream shop Van Leeuwen follows a similar methodology for its vegan ice cream, combining coconut cream with cashew to create a rich texture. Forty percent of its scoop shop menu is vegan, a testament to its popularity among customers.

In November 2017, Columbus, Ohio-based artisanal brand Jeni’s Splendid Ice Cream launched its first dairy-free flavor, Dark Chocolate Truffle, made from coconut cream and fair trade chocolate. The flavor was in development for five years. Founder and CEO Jeni Britton Bauer described the flavor as so “deeply, primally satisfying that since the first time I had it, I think about it and crave it just as much as dairy ice cream.”

While vegan bacon-infused ice cream has yet to hit supermarkets nationwide, you can make your own at home by following Tofurky’s recipe. It combines the brand’s tempeh-based bacon with dairy-free vanilla ice cream, maple syrup, and chopped pecans.