(Updated May 26, 2019.) Volkswagen’s new electric car features vegan seating made from AppleSkin, a vegan leather made from apple juice waste.

Called the ID. Roomzz, the electric SUV features rotating faux leather seats and a 280-mile range. It will also have an automated driving system with someone still behind the wheel.

Bloomberg notes that the new Volkswagen car is a challenger to Tesla’s Model X, a luxury electric SUV. The German car manufacturer has spent $34 billion to roll out an unprecedented fleet of electric cars. It aims to develop 80 all-electric vehicles by 2028, and make its apple leather option widespread. 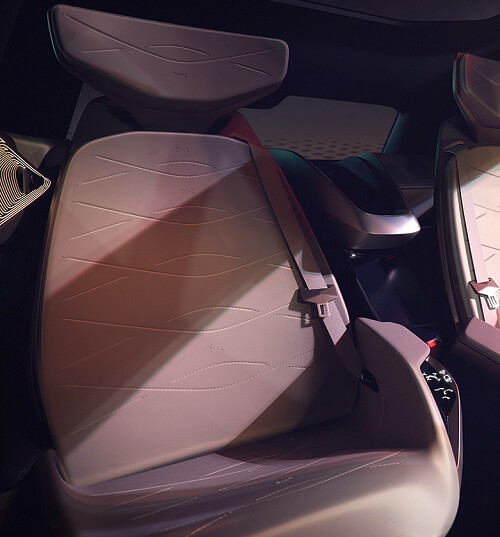 The ID. Roomzz announcement closely follows fraud charges against former Volkswagen CEO Martin Winkerton regarding diesel emissions. The Independent reports that the company’s top executives were aware that exhaust data had been manipulated.

The Rise of the Electric Vehicle

The once-mocked electric car has become increasingly popular in recent years due to growing concerns about fossil fuel use and carbon emissions in the transportation industry. According to the EPA (Environmental Protection Agency), transportation — which includes cars, planes, ships, etc — accounts for more greenhouse gas emissions than any other industry in the US.

Electric vehicles are particularly popular in China, where leaders are putting pressure on manufacturers to make more eco-friendly cars. Chinese purchases of electric and hybrid vehicles climbed 60 percent last year — half of the global total –, according to MarketWatch. Volkswagen aims to target China with its upcoming launch of electric cars.

Tesla, founded by tech entrepreneur Elon Musk, has largely paved the way for electric cars to become more mainstream. Musk made Tesla patents public in 2014, stating that reducing carbon emissions is more important than competing with other companies.

“Technology leadership is not defined by patents, which history has repeatedly shown to be small protection indeed against a determined competitor, but rather by the ability of a company to attract and motivate the world’s most talented engineers,” he wrote.

Leather was once standard for luxury cars, but Tesla, along with Nissan, Audi, and Volvo have all embraced electric vehicles featuring vegan-friendly seating.

The Volkswagen ID. Roomzz will be available from 2021.