Updated June 26, 2019. New York-based fast-casual chain Shake Shack has a vegan burger — but whether or not you can order it depends on where you live.

The popular chain, famous for its meat-heavy menu, first debuted the Veggie Shack at select locations in New York City in April 2018. The burger features a meatless patty made from black beans, brown rice, and roasted beets. It comes topped with provolone cheese, lettuce, tomato, onions, pickles, and eggless mustard-mayo. According to Shake Shack, it can be made vegan by swapping in a gluten-free bun or lettuce wrap.

The Veggie Shack is being trialed at 20 locations throughout the country, including New York City, San Diego, Burbank, and Dallas.

Shake Shack CEO Randy Garutti said earlier this month that the chain isn’t sold on the idea of vegan burgers just yet. He added that he spoke with leading vegan meat brands Beyond Meat and Impossible Foods and is keeping an eye on other brands creating vegan burgers, such as Nestlé. For now, the chain will settle on trialing its house-made veggie burger. 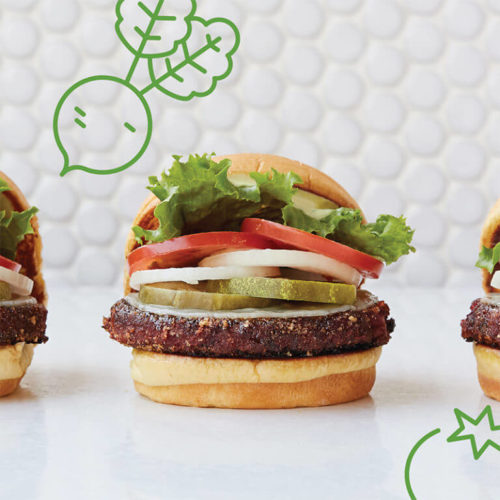 “If people keep coming back for these products, once this euphoria moves past its initial stages, then let’s listen and learn and we’ll see,” Garutti said in an interview with Bloomberg.

Both Beyond Meat and Impossible Foods have made a big impact in the fast food space. Burger King, which trialed the vegan-friendly Impossible Whopper at 59 locations in St. Louis, Missouri earlier this year, reported a 30 percent increase at those locations. The chain decided that it would make the Impossible Whopper available nationwide by the end of the year. Impossible Foods’ vegan meat is also served at White Castle and several smaller chains like Fatburger, Bareburger, and Wahlburger.

Beyond Meat is also available at an increasing number of chains, such as A&W Canada, Carl’s Jr., A&W Canada, and Del Taco — for the latter, adding Beyond Meat’s vegan beefy crumbles to the menu was one of the most successful launches the chain’s history. The Beyond Burger also boosted sales by 10 percent at A&W Canada.

However, Garutti is still skeptical. “We’re not trying to compete with those guys and we’re certainly not trying to serve the same products,” he said. “It’s a fascinating thing we all have to watch, but it needs time.”