SeaWorld and its former star killer whale Shamu are shrouded in controversy, largely thanks to the 2013 Netflix exposé “Blackfish.” In the documentary, former trainers spoke out against the marine park and the scandals it has attempted to cover up.

Since then, celebrities have condemned SeaWorld, consumers have begun to turn their backs on cetacean captivity, and profits and ticket sales have dropped. But for better or worse, the marine park wouldn’t be where it is today without Shamu, its most famous killer whale. 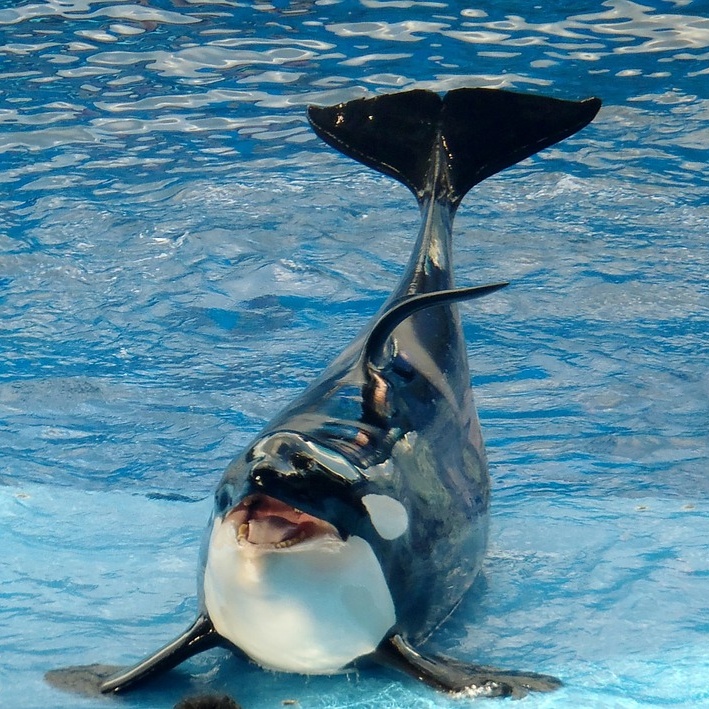 Shamu lived in SeaWorld San Diego in the 1960s.

The original Shamu was the fourth orca SeaWorld ever captured. She lived in SeaWorld San Diego in the 1960s, where she performed tricks for audiences.

After six years in captivity, Shamu died. Before her death, she seriously injured several people, including Anne Eckis, a SeaWorld employee, who she bit during a live recorded performance. Shamu had reportedly shown signs of erratic behavior before the incident.

After her death, Shamu’s name lived on. She became a brand. All of SeaWorld’s shows revolved around her character, with many different orcas playing her part in live performances. 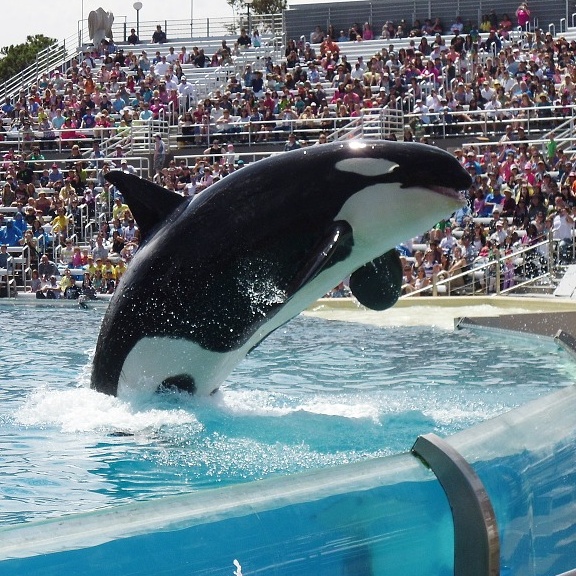 May have accused SeaWorld of cruelty to animals.

Why Is Shamu Important?

Shamu is a symbol of SeaWorld’s checkered history with animal welfare. The company has been accused of cruelty to animals on countless occasions.

In a recent campaign video against the marine park, actor, model, and activist Pamela Anderson said, “we’ve been fighting against SeaWorld for a long time because obviously captivity is not something that anybody’s comfortable in, especially whales that swim 100 miles a day.” She added, “I can’t imagine a wild animal being happy in an enclosed environment.“

Various animal rights campaigns have compared the tanks at SeaWorld to living in a bathtub. To match the amount of swimming an orca would do in the wild in one day, they would have to swim around the tank 4,000 times.

The stress of living in such an environment causes the animals a number of physical and mental health problems; they grind their teeth, they float listlessly, and many have collapsed dorsal fins — an injury that is rarely seen in the wild.

According to Naomi Rose — a marine mammal scientist at the Animal Welfare Institute –, the reason orcas suffer in captivity is “basic biology.” She told National Geographic, “If you have evolved to move great distances to look for food and mates then you are adapted to that type of movement, whether you’re a polar bear or an elephant or an orca.”

She continued, “You put orcas in a box that is 150-feet-long by 90-feet-wide by 30-feet-deep and you’re basically turning them into a couch potato.” She added, “not one marine mammal is adapted to thrive in the world we’ve made for them in a concrete box.“ 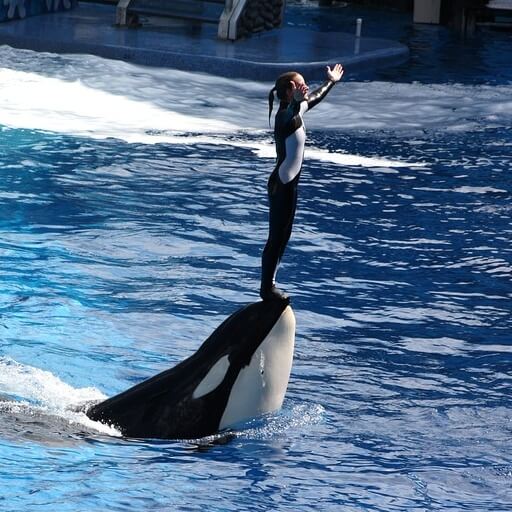 SeaWorld’s orca show is based around the Shamu brand.

What Happened to Subsequent Shamus?

Like the original Shamu, many of SeaWorld’s killer whales have exhibited distressed, erratic, and dangerous behavior in response to living in captivity.

It’s not just the animals who have suffered at SeaWorld. As aforementioned, orcas have caused serious harm to humans. And it goes further than biting. Tilikum — the primary subject of “Blackfish” — killed three people, two of whom were his trainers.

In 2010, he drowned Dawn Brancheau — a senior animal trainer — by dragging her to the bottom of his tank during a “Dine with Shamu” show at SeaWorld Orlando. Nearly 20 years earlier, he was responsible for the death of Keltie Byrne, a trainer at the now-defunct marine park Sealand of the Pacific in Vancouver.

Tilikum died in 2017 of a bacterial infection aged around 36. In the wild, male orcas can live up to 70 years.

SeaWorld no longer breeds orcas, but it still has them in its parks. In SeaWorld San Diego, there are 10 orcas. In Orlando, there are five. Dolphins, penguins, sea lions, walruses, sharks, and beluga whales are also kept in captivity by SeaWorld. There are calls for these animals to be moved to sea sanctuaries. 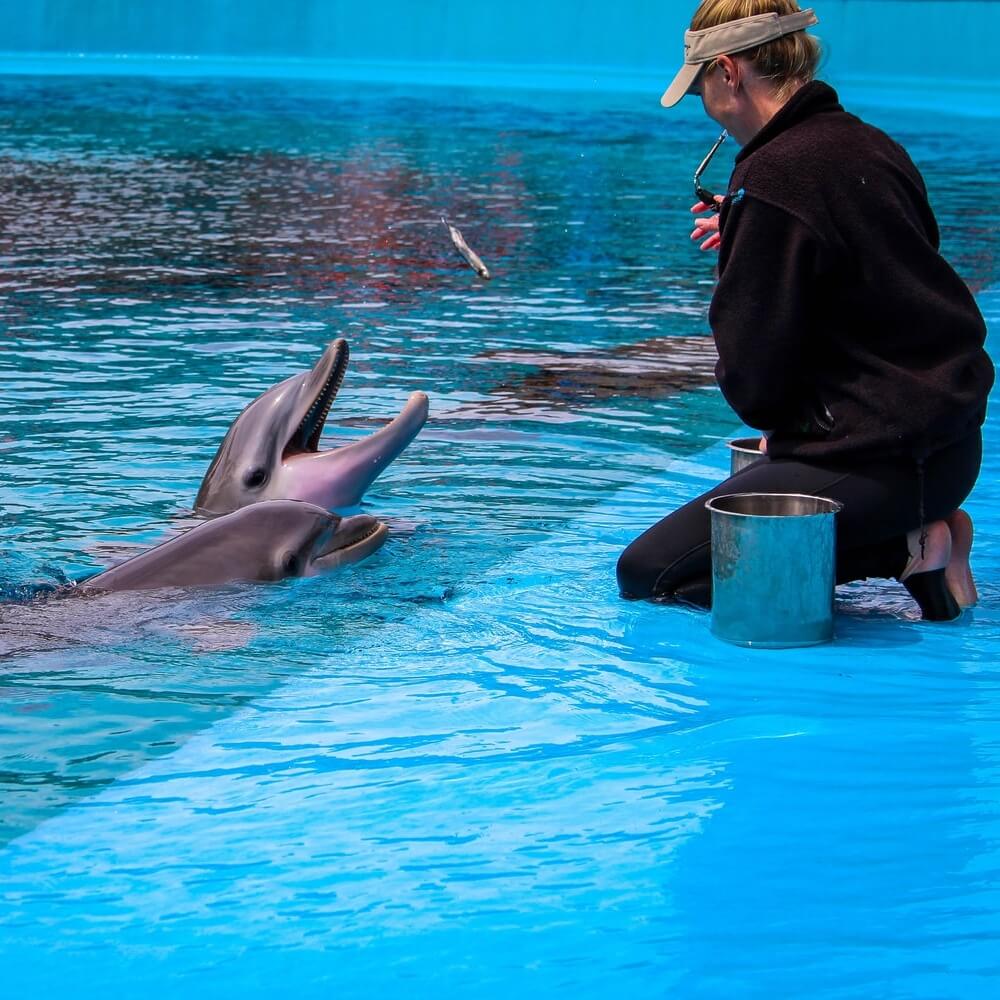 Dolphins are in captivity at SeaWorld.

Why Shamu Is More Important Than Ever

The story of Shamu and everyone who came after her has changed the way the public views marine animals kept in tanks for entertainment. Tilikum, in particular, has helped to wake people up to the cruelty of SeaWorld.

“His life has changed how we view SeaWorld and the marine park industry,” “Blackfish” co-writer Tim Zimmerman once wrote for National Geographic. “[He] changed our moral calculus regarding the confinement and display of intelligent, free-ranging species.”

A large number of travel companies and airlines have cut ties with SeaWorld in recent years, including British Airways, United Airlines, Virgin Holidays, WestJet, and Air Canada. All of them have cited the same reason: animal welfare.

Lauren Stewart — a WestJet spokesperson — told the Calgary Herald last year, “this was a decision our leadership team made entirely on its own and believes the decision is entirely in keeping with our caring culture.”

Before it went into liquidation, travel giant Thomas Cook also dropped SeaWorld on ethical grounds. Nigel Thompson — travel editor for the British newspaper the Mirror — said the move was both “bold and brave.”

He added, “I think the British public’s appetite for watching performing marine mammals has waned. It’s a throwback to a less enlightened time.” 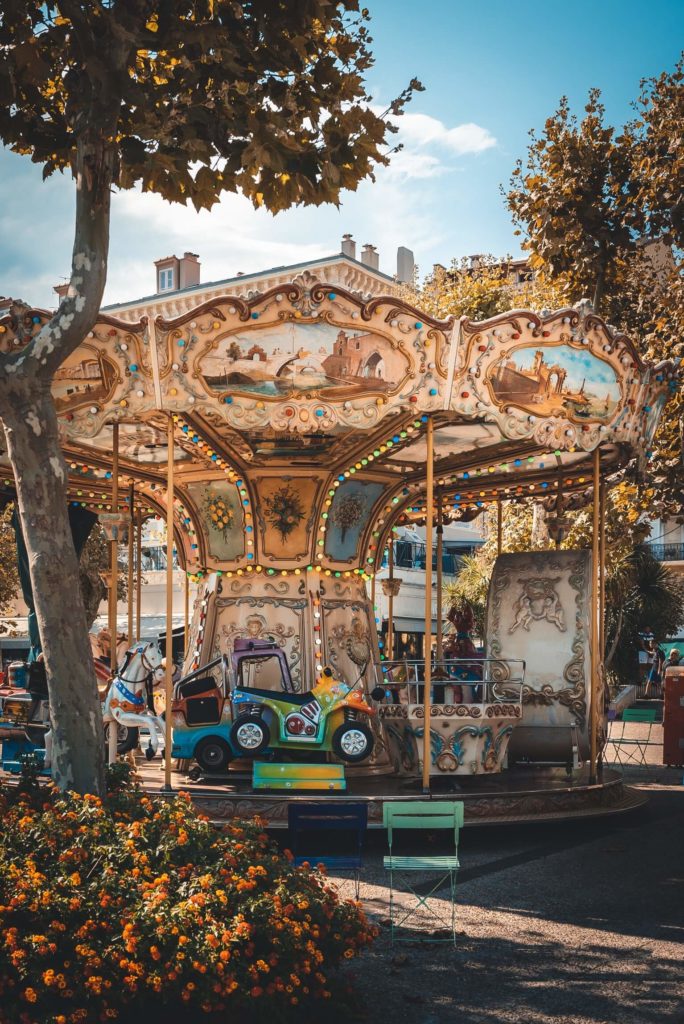 SeaWorld is shifting its focus to family-friendly rides.

What’s Next for SeaWorld?

SeaWorld appears to be shifting its focus away from the animals. Instead, it’s turning its attention to rides, festivals, and themed experiences.

According to Orlando Weekly, across all of the SeaWorld parks, there isn’t one new animal attraction planned. The last major animal habitat opened at SeaWorld Orlando was Antarctica: Empire of the Penguin in 2013. “Instead, every park [now] has new thrill rides in the pipeline,” says the newspaper.

It notes that the company is “years into a shift away from animals and toward family thrills.” It observes that SeaWorld seems to be trying to find a balance between a Six Flags-style theme park and a Disney-esque experience.

It’s also embracing the festival trend. “The changes across SeaWorld aren’t just focused on adding new rides,” says Orlando Weekly. “One of the most successful additions in recent years has been the rave-inspired Electric Ocean summer festival at three SeaWorld branded parks.” The festival — which is loosely based on creatures of the deep –has brought more people to the marine park.

SeaWorld recently announced one of its newest ventures will not focus on animals at all. It is opening a new “Sesame Street” theme park in Chula Vista, near San Diego. According to the LA Times, the new theme park will focus on family-friendly rides, including tame roller coasters and carousels, as well as parades and character interactions.