The reality series featured Deborah and Jonathan Torres, co-founders of Los Angeles-based vegan fried chicken startup Atlas Monroe, on Sunday’s episode. The meat-free chicken, made from wheat protein, was a hit with all of the sharks.

“I went vegetarian three months ago. This is important to me. I love products I can eat,” Cuban said during the show.

Despite questioning from Greiner, Cuban, and Barbara Cocoran, the Torreses said they have orders coming in and interest from a mainstream restaurant chain. That was enough for Cuban and guest shark Rohan Oza to offer them a deal. The two offered $1 million for Atlas Monroe with a 10 percent royalty for the Torreses. But, not wanting to give up control of the company, they declined the deal.

“The fact you guys are even offering a million dollars let’s me know you do understand what we are worth,” Deborah said.

This isn’t the first time vegan business owners pitched their brand to the sharks. Cinnaholic, a vegan cinnamon bun chain, appeared on the show in 2014, walking away with $200,000 in exchange for 40 percent of the company. The chain continues to expand.

The Story Behind Atlas Monroe

Atlas Monroe began selling its signature product at festivals. Last October, National Fried Chicken Festival judge Ryan Grim declared it “the best“ out of 35 vendors. It was the sole vegan vendor at the event. It now offers plant-based applewood-smoked ribs, Thanksgiving roast, and cake, all of which can be shipped nationwide.

Deborah and her partner adopted a raw vegan diet for 90 days to support her father, who was diagnosed with type-2 diabetes in 2014. Her father was able to reverse his symptoms, but the Torreses “grew bored of eating salads and smoothies.” It was then that they began experimenting with making vegan comfort food.

The raw vegan diet had a lasting impact on their lifestyle.“After the 90 days ended, I knew the consumption of animal products was not only unhealthy for human bodies due to many factors at play, but also horrible for the economy,” Deborah told LIVEKINDLY in an email. “We vowed never to harm or eat animals or animal byproducts again.”

But, they found it difficult to eat at restaurants and find food that delivered the flavor they were looking for. The two began developing vegan fried chicken recipes for Atlas Monroe in their home kitchen.

“Jonathan and I both worked full-time jobs so during this time and we saved $20,000 to start our business,” said Deborah. “To this day we carry no debt to names or business — no loans, no lines of credit, no business credit card or personal debt.” 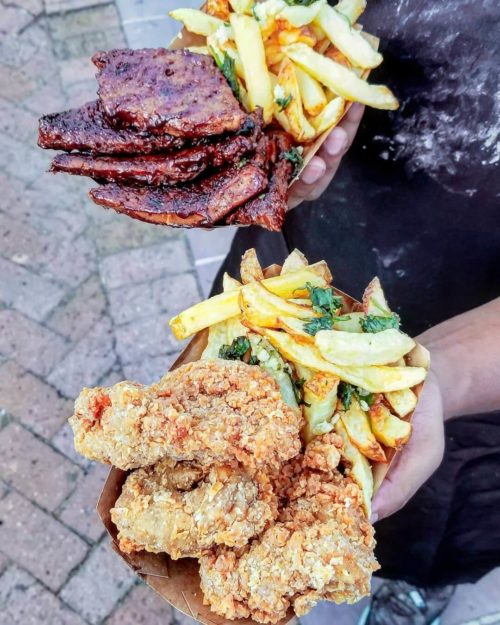 The two began vending at festivals in June 2017. Soon, they were selling vegan fried chicken at events across the country and abroad. “Every single festival we attended, we maintained an extraordinarily long line that had a two to three-hour wait,” said Deborah.

Last December, Atlas Monroe began filling on-demand orders, using Instagram as the only form of marketing. “The results were impressive,” said Deborah. “We grossed over $14,000 within a week with about 700 products sold. Since then, we have been selling out every single time we open our website for sales and the demand is exponential.”

At the encouragement of friends and family, the Torreses auditioned for “Shark Tank” and made it through the rounds. Deborah strongly feels that the world is ready for vegan food. And although they passed on the sharks’ offer, she believes in her product as well.

“We have a damn good product that we make from scratch from our hearts and with our hands that speaks for itself — even above real fried chicken,” she said. “We made it because of the support of my family and because we had the drive, determination, and faith to. We made it because we were meant to. Sometimes the universe had a way of presenting to you what is already yours and when that happens you better reach up to the stars and grab it.”