The annual Easter sheep race at Hoo Farm Animal Kingdom in Telford, England, has been canceled this year. The family-run farm and zoo came to this decision after receiving a petition with over fifty-thousand signatures, calling for an end to this animal-based entertainment.

Hoo Farm has held this holiday sheep race since 1991. The race involves two events, the Sheep Grand National and the Sheep Gold Cup, both of which involve strapping stuffed animals to the backs of sheep and making them hurdle over fences in pursuit of food. No physical abuse was reported to urge the animals ahead. However, the Lambenations, the UK animal welfare group that initiated the petition, claimed that the sheep were mistreated. Lambenations founder, Samantha Francis, explained that as prey animals, sheep only run out of fear. Therefore, by forcing these animals to race, the organizers were causing the sheep to experience unnecessary fear and stress.

In an interview, Francis said, “The cancellation of these races is a win for the sheep because any animal racing is exploitative.” She continued, “It is also a win because it raises awareness and will hopefully make others who plan to hold such events to think twice, as there is clearly a large public opinion against such events.” 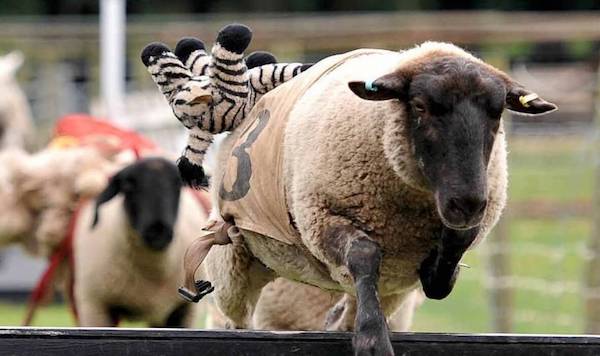 Will Dorrell, a partner at Hoo Farm, wrote in a statement, “Being animal lovers ourselves…we would not continue any activity that was cruel or unfair to the animals involved.”  In a video, Dorrell continued, “We are reviewing the situation. We will speak to vets and animal health officers and seek their guidance. If they come back and say it is not causing any discomfort to the sheep then we will probably reschedule it either for later this year or next.”

In lieu of the sheep race, the zoo will hold it’s first children’s sheep race. Willing children will have the opportunity to dress up as sheep and jockeys and run through the former sheep course themselves.

While the Hoo Farm sheep race may be canceled this year, sheep racing is still a common practice around the world. The Lambenations are actively working to put an end to this practice. In December 2017, the organization launched its first campaign in the US. It collected over seventy-two thousand signatures calling for a ban on mutton bustin’, an annual event at the National Western Stock Show and Rodeo in Denver in which children ages five to seven ride frantic sheep while they are propelled out of a chute into an arena. This event was still held, though the Lambenations plan to pursue a ban in the future.