If you haven’t been keeping up with the news, here’s a brief recap of what’s been happening in Kentucky. Earlier this month, Senate Bill 9, which would ban abortion after a “fetal heartbeat” can be detected — typically as early as six to seven weeks– was signed into law by Governor Matt Bevin (R). This is before most people (“people,” because not only women get pregnant) even know they are pregnant.

A second bill, HB 5, which would ban abortion for disability, race, or sex, was also introduced. It has been accused of being a “what if” law that focuses on theoretical situations rather than how the state can help the parents of children with disabilities.

One day later, enforcement of both bills was blocked by U.S. District Judge Dave Hale to “prevent irreparable harm” until a hearing could be held. The American Civil Liberties Union (ACLU) has filed lawsuits due to being potentially unconstitutional. Similar laws were struck down for that reason in Iowa and North Dakota, per the New York Times.

“There’s nothing ‘pro-life’ about eating baby animals who were killed in order to end up on a plate or in a carry-out box,” PETA President Ingrid Newkirk said in a statement. “Pigs, cows, and chickens are just weeks or months old when they’re slaughtered for a fleeting taste of flesh, and PETA’s billboard urges everyone to keep animals’ hearts beating by eating vegan. It’s easy, and we have free recipes to get you started.”

As a vegan and someone who supports a person’s right to choose, I have to ask: is it in poor taste make a conversation that could seriously harm thousands of individuals about animals? Is it throwing people under the bus in the name of animal rights something vegans should do? I don’t think it is. 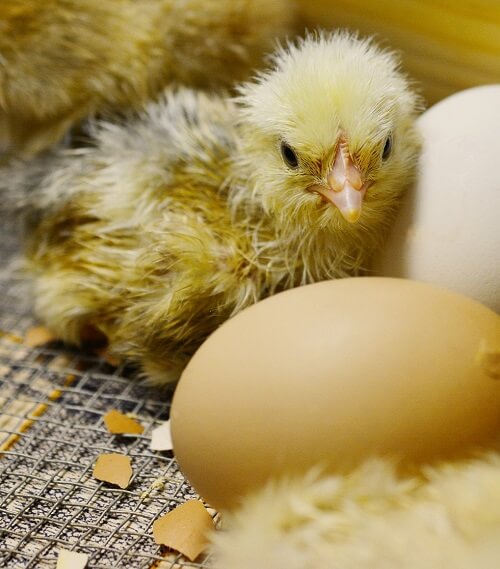 Chickens are typically killed at seven weeks, but does that mean we should use abortion to talk about animal rights?

What Is PETA’s Stance on Abortion?

Per the PETA website, this is its stance on abortion:

PETA and Abortion: A Brief History

To its credit, PETA is probably the most mainstream representation of veganism. The organization has worked with high-profile celebrities and has had a hand in influencing brands to stop animal testing or selling materials like fur. But its place in mainstream culture tends to come as a very mainstream, white, cis, patriarchal, heteronormative, and financially privileged portrait of veganism.

PETA has been accused of a number of -isms throughout the years, including sexism, racism, transphobia, fatphobia, antisemitism, body-shaming, classism, ableism, and insensitivity toward issues from ICE separating immigrant children from their parents and yes, abortion. Numerous people have written about these issues in the past — I recommend reading the essays on Sistah Vegan, a blog run by scholar Dr. Breeze Harper. 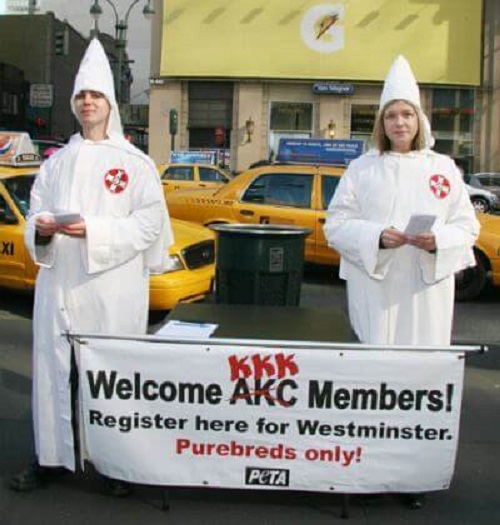 It’s apparent that PETA may take “no press is bad press” to heart. In response to fat-shaming ads telling people to “Lose the blubber” by going vegetarian, Newkirk said, “I wish more than anything you can ever imagine that we could not be controversial, and we could not be provocative. I really do.”

While that happened in 2009, things don’t seem to have changed. The group faced strong backlash for insulting deceased conservationist Steve Irwin on his birthday this year.

PETA is indeed a product of the culture we live in — but the organization doesn’t have to prescribe to it. There are activists, scholars, and groups like Dr. Harper, Jaya Bhumitra of Animal Equality, Michelle Carrera of Chilis on Wheels, Lauren Ornelas of the Food Empowerment Project, and more who uplift, rather than use marginalized groups to get a point across.

Despite PETA supposedly having no stance on abortion, the group has inserted animal rights into the abortion debate on a number of occasions. I reached out to PETA for a comment on the decision to use abortion to promote veganism.

“PETA is an animal rights organization, and our mission statement is ‘Animals are not ours to experiment on, eat, wear, use for entertainment, or abuse in any other way.’ Of course, baby animals are those most commonly killed for meat, and any discussion of abortion provides us with the opportunity to suggest to people who are ‘pro-life’ that going vegan is a great way to express that stance,” a PETA representative told me via email.

Following the assassination of Dr. George Tiller, a physician who served as a medical director at one of three clinics in the U.S. to provide late-term abortions, in May 2009, PETA intended to erect two separate billboards in Wichita, reading “Pro-Life? Go Vegetarian” and “Pro-Choice? Choose Vegetarian.”

Both ads were rejected by billboard companies. “It’s in poor taste considering the crisis that’s going on in the community right now,” John Lay, president of George Lay Signs Inc, told the Wichita Eagle. “I don’t see anything patently offensive about the ads, but the timing is just not appropriate.”

In 2011, a 63-year-old man was charged with first-degree intentional homicide for his plans to shoot an abortion provider at Planned Parenthood in Madison, Wisconsin. He had a history of participating in anti-choice protests.

“This fits a pattern,” Vicki Saporta, president of the National Abortion Federation, told the Wisconsin State Journal in reference to “the escalation of activities from perhaps just protesting to making threats to carrying out threats.” 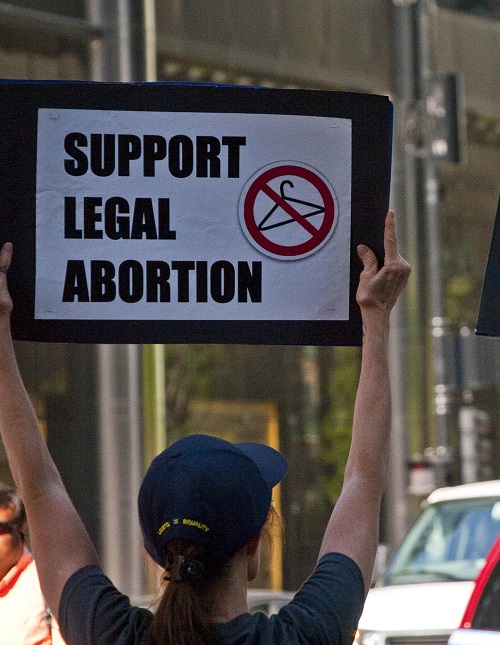 PETA highlighted that protesters stood outside the courthouse holding signs that read “Meat is murder” and “A pork chop stops a beating heart“ in support of the pro-choice movement.

In 2012, PETA used an abortion law that would ban the procedure after 20 weeks to talk about animals. Following legal action by the Center for Reproductive Rights and the ACLU, the “Mother’s Health and Safety Act,” was blocked by the Ninth Circuit U.S. Court of Appeals on the grounds that it is unconstitutional.

In response, PETA sought to display an ad showing a baby chicken with the text “Killed at 7 Weeks.” In the meat industry, the average age that broiler hens are killed is indeed seven weeks, according to Compassion in World Farming.

The attempt to revive the law went all the way to the Supreme Court, which declined to hear an appeal in January 2014.

The animal rights movement is diverse and there is no unified stance on abortion. I’ve seen comments praising New York legislators for introducing a bill to ban fur that called lawmakers “hypocritical” for supporting a bill legalizing late-term abortion — which is a harrowing, emotional, and difficult decision made when the parents’ or child’s life are in danger — in the same sentence.

I am also friends with vegans who volunteer their time to escorting people into local Planned Parenthood clinics due to aggressive anti-choice protesters.

Personally, my veganism and stance on human rights go hand-in-hand. I am pro-choice because I believe that it’s antithetical to my veganism that a sentient being should be forced to give birth.

Mainstream news has celebrated the brave farm animals rescued by sanctuaries after escaping slaughterhouse transport trucks. Those who attend slaughterhouse vigils have captured photos showing the fear in the eyes of animals on their way to death. In the dairy industry, calves are often torn from their mothers shortly after birth.

These are the same animals that escape those trucks and go on to live full lives at sanctuaries — they all feel fear, pain, happiness, and the will and the means to preserve their lives. Unfortunately, we humans have stripped non-human animals of rights because we have the privilege of doing so. But animals are sentient — a fetus is not. None of this is the same as terminating an unwanted pregnancy.

There are numerous reasons why someone may choose to have an abortion and none of them are anyone’s business but the individual’s.

For the record, Planned Parenthood also provides affordable birth control (where the idea is to prevent unwanted pregnancy and abortion in the first place), treatment and tests for STIs and HIV, cervical and breast cancer screening, contraception education, gender-affirming hormone therapy for trans* individuals, and abortion. Planned Parenthood relies on Title X — the nation’s first program for affordable birth control and reproductive healthcare — which happens to be under attack by the Trump administration right now. 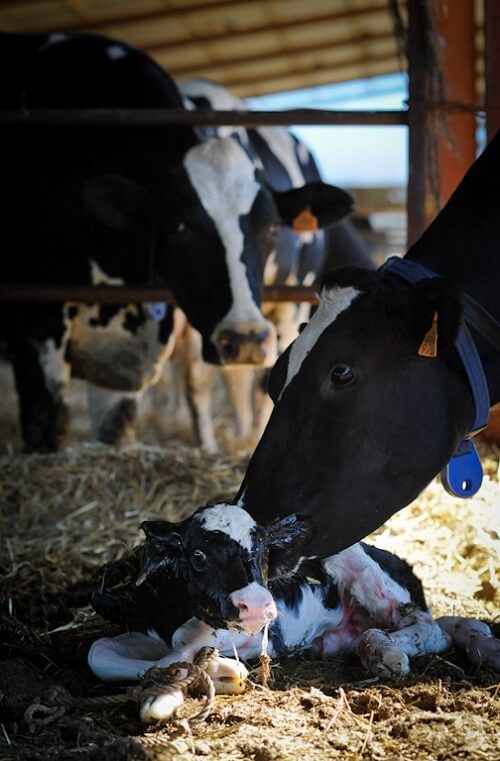 In the words of Fajer Saeed Ebrahim, the reproductive health fellow at Legal Voice for Bustle, the attempted gag rule on Title X is discrimination. The vast majority of Title X patients live below the federal poverty line.

That’s $12,000 for individuals and $25,100 for a family of four. LGBTQ people and People of Color are more likely than other groups to be economically disadvantaged. To this queer woman, there is nothing vegan about denying marginalized communities access to affordable, life-saving health care nor taking away one’s bodily autonomy.

Is there space to talk about both issues? Maybe. But a “by any means necessary” approach to animal rights primarily serves the privileged.