Lions can’t be vegan. Vegans, science, and the majority of the world know this. Yet one of the most frustrating arguments against adopting a plant-based diet is “lions eat meat,” often punctuated with the puzzling question, “would you force a lion to be vegan?”

It’s a pervasive argument, so much so that it’s made its way into popular culture in some instances. In season 2, episode 15 of Matt Groening’s animated sci-fi comedy “Futurama,”  “The Problem with Poplers,” the fact that a group of old-school hippie vegetarians taught a very sickly-looking lion to eat tofu makes them the butt of a joke.

In a recent satirical article about Disney’s upcoming live-action remake of “The Lion King,” one publication writes: “Simba is a vegan in the new Lion King film.” The aim seems to be the same goal as the “lions eat meat” argument: to make vegans look silly, weak, and unreasonable. Twelve-year-old activist Genesis Butler, Farm Sanctuary founder Gene Baur, and German strongman Patrik Baboumia and record-breaking Icelandic powerlifter Hulda B. Waage have all proven that’s anything but the case.

“We’ve written a new song for Simba to sing about how much he loves tofu. Zazu does a little rap halfway through,” states a “confirmed Disney spokesperson” in the article. 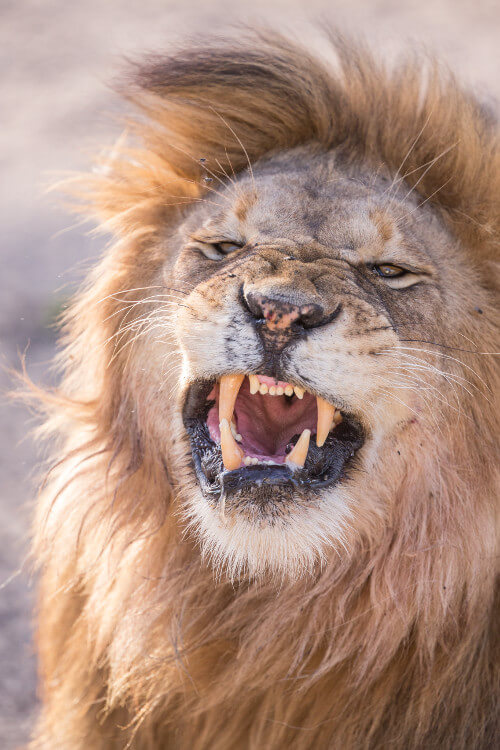 “Towards the end of the film, Simba attempts to defeat Scar via a series of protests and petitions, which inevitably doesn’t work. Simba then develops an iron deficiency which means Scar is fairly able to just kick the sh*t out of him in the final battle,” it adds.

While it’s not a serious issue, it highlights a discomfort with a plant-based diet that translates into mockery. Can lions be vegan? The obvious answer is, no, because they can’t thrive on plants. They’re obligate carnivores, meaning that eating a meat-based diet is literally in their biology.

But the same can’t be said of humans. Yes, people say humans need meat to live a healthy life. Yes, we’ve eaten meat for thousands of years. Yes, like carnivores, we have canines – the teeth designed for biting, ripping, and tearing flesh. But then again, so do great apes like gorillas and chimpanzees. Their canines are much larger than a human’s, yet their diet is primarily fruit. No one would confuse lion canines with human teeth.

NPR writes that in the book “Meathooked: The History and Science of Our 2.5-Million-Year Obsession with Meat,” science journalist Marta Zaraska dives into the historical and cultural reasons for our love of meat. She highlights that carnivores like lions have “blade-like” carnassial teeth in the back of their mouth to aid in slicing up raw meat in comparison to humans’ molars, which are flat and better for grinding up plants. Our digestive system is also closer to great apes and other herbivores compared to carnivorous lions.

Zaraska adds that the amino acids required by the human diet can also all be derived from plants. Her claim is further backed by Doctor Neal Barnard, founding president of PCRM, a nonprofit organization of more than 12,000 doctor members that support the health benefits of a plant-based diet. According to Barnard, many people see improvements to their vitamin and nutrient intake when they eat more plants.

So, will Simba be vegan in “The Lion King” remake? No, of course not – because lions can’t be. But humans can.