The Singapore Food Agency (SFA), the nation’s food authority, reviewed extensive documentation of how the cell-based chicken is made.

The SFA has deemed it safe for human consumption, paving the way for Eat Just to launch its new GOOD Meat brand. Eat Just will sell the meat as nuggets, first to restaurants, and eventually to retailers.

According to the company, cell-based chicken meat is high in protein, contains a diversified amino acid composition, and is high in minerals.

Cultured meat—also known as cultured, clean, or lab-grown meat—is identical to conventional meat, but it’s slaughter-free. Instead, scientists grow it in a lab from animal muscle cells. The process is kind of like growing plants in a greenhouse.

“The cultivator facilitates the same biological process that happens inside an animal by providing warmth and the basic elements needed to build muscle: water, proteins, carbohydrates, fats, vitamins, and minerals,” the Good Food Institute (GFI), a nonprofit that promotes the acceleration of alternative proteins, explains.

Raising animals for food places incredible strain on the environment. According to the UN, an estimated 14.5 percent of greenhouse gas emissions come from animal agriculture. 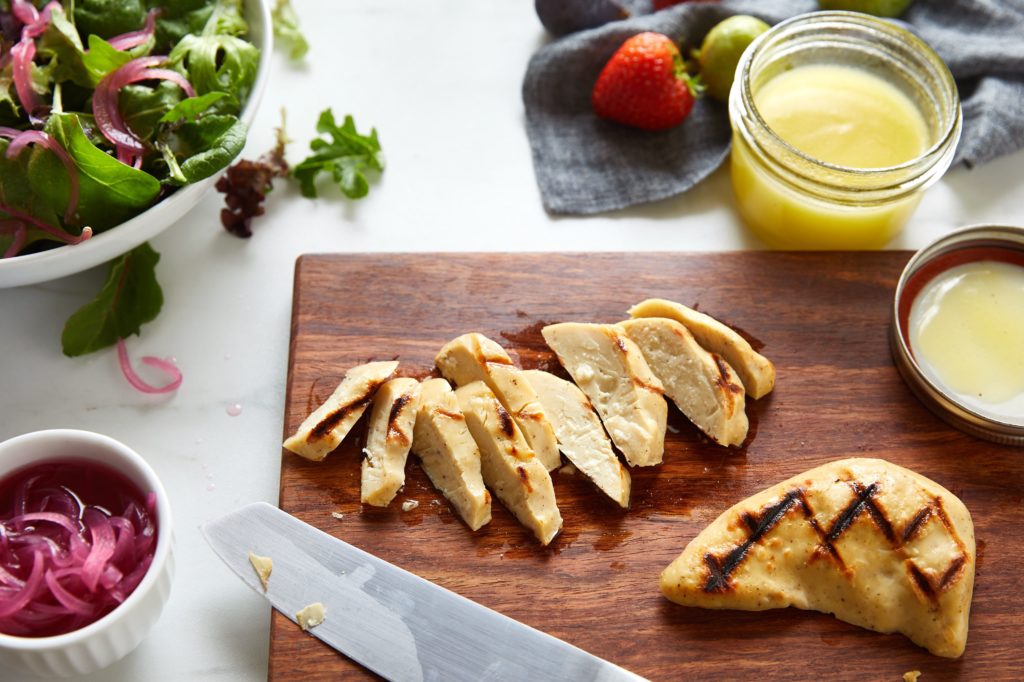 Increased awareness of animal agriculture’s impact on planetary and personal health has led to a spike in demand for and availability of plant-based food. But it’s still early days for cultured meat. Israel-based startup SuperMeat is offering the public a taste of its cell-based chicken, but so far, no brand has brought a product to market.

According to Eat Just, it is also in talks with U.S. regulators to sell cultured meat. But Singapore is ahead of the game.

“Singapore has long been a leader in innovation of all kinds. From information technology to biologics to now leading the world in building a healthier, safer food system,” Josh Tetrick, co-founder and CEO of Eat Just said in a press release. “I’m sure that our regulatory approval for cultured meat will be the first of many in Singapore and in countries around the globe.”

He noted that cultured meat producers can help meet the growing demand for animal protein by working with the agriculture sector and policymakers.

According to GFI, Eat Just’s approval will likely create a domino effect for the approval and funding of cultured meat across Asia. Many have likened the mobilization to bring cultured protein to market to the start of a modern-day “space race.”

“The Singapore Food Agency has long been in the vanguard of global regulators in its study of the cultivated meat industry and its careful consideration of the best approach for regulating cultivated meat, poultry, and seafood products,” Elizabeth Derbes, GFI Associate Director of Regulatory Affairs, said in a statement sent to LIVEKINDLY.

Singapore is in a unique position to take the reins. The city-state imports roughly 90 percent of its food. But, it aims to produce 30 percent of its nutritional needs locally by 2030. This includes not only cultured meats, but also protein made from plants, algae, and fungi. In March 2019, Singapore Finance Minister Heng Swee Keat announced that S$144 million would be designated to the Singapore Food Story R&D Programme, which includes cultured meat production.

Singapore-based food technology startup Shiok Meats also aims to gain approval from the SFA to sell its products. It unveiled the prototype for the world’s first cultured lobster meat late last month and aims to commercialize Shiok Shrimp by 2022.

Eat Just plans to manufacture cultured chicken in Singapore as well as its mung bean-based vegan egg, the Just Egg.