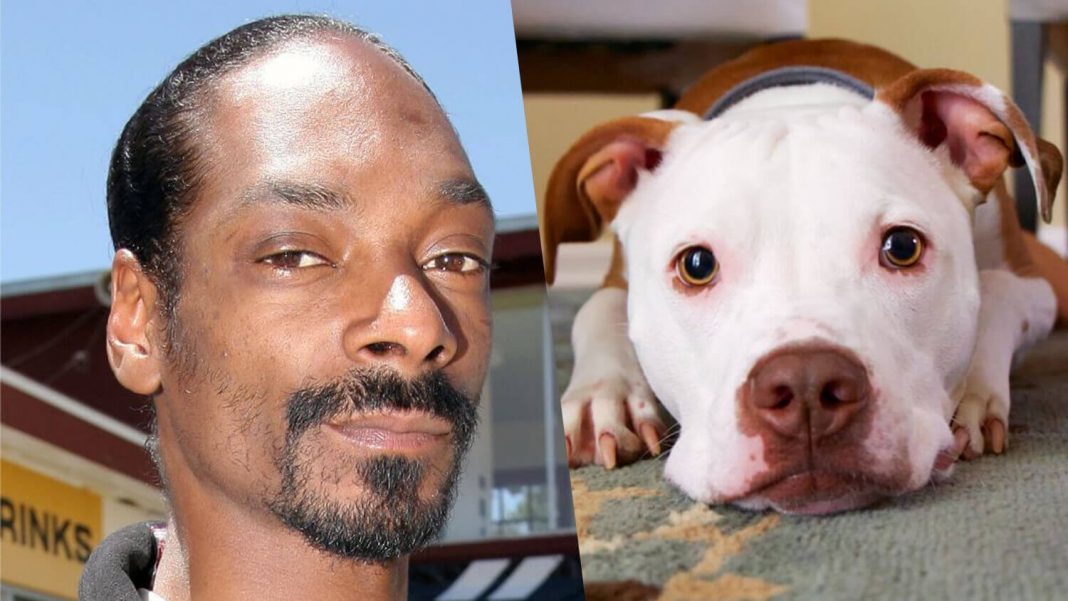 Snoop Dogg is smitten with a Staffordshire terrier, often considered to be part of the pit bull family, named Snoop. The Daily Star reports that the award-winning rapper offered a home to the dog, who was abandoned in England just before Christmas.

“It is heartbreaking,” Snoop Dogg said after seeing a video of the dog being left on the side of the street. “There is always room for another dog in Casa de Snoop.”

The video footage was released by Rachel Butler, regional manager for the RSPCA (Royal Society for the Prevention of Cruelty to Animals) shows an unidentified man abandoning the dog and his bed on the side of the street. He runs back to the car and is followed by the frightened Staffie, who puts his paws up on the car begging to be let in.

Snoop’s previous caretaker then drives away and, desperate to catch up to his human, the dog runs after him.

Snoop was discovered by a passerby after being abandoned by the roadside, and is recovering amazingly in our care. He’s a super sweet boy who loves being around people, and as he’s not yet available for rehoming, he’s been enjoying some scrumptious snuggles with our animal centre staff ??

Snoop was later rescued by the RSPCA, who found him in his bed, and named him after the rapper. Since being saved, the dog earned overwhelming support from the public after they learned his story. Countless people, including the 47-year-old rapper, have offered to give him a home.

“If he really needed a home then he has one with us,” Snoop Dogg continued. A dog-lover himself, he launched a line of pet clothes in 2006. He also backs Dog for Dog, a charity that donates food and resources to shelters around the globe.

“But I don’t think there is going to be any shortage of loving homes after all the exposure he has got,” Snoop Dogg added.

According to Butler, Snoop is doing well in his temporary shelter home. “He is a lovely friendly dog and a lot of people have fallen in love with him,” she told People.

“At the moment he isn’t up for rehoming while our investigation into his abandonment is ongoing,” Butler added. “However, we have had scores of people wanting to rehome him so we are certain he will not be waiting long for a new home.”