The coffee and donut chain announced the commercial’s television debut on its website. The ad features Snoop Dogg, clad in a Dunkin’ apron and hat, serving the meat-free sandwich to unsuspecting customers. The commercial was released across Dunkin’s social media channels last November, coinciding with the Beyond Breakfast Sandwich’s launch.

Dunkin’ named the Beyond Sausage Sandwich “its most significant menu introductions in recent brand history.”

The meat-free sandwich, which features egg, cheese, and a Beyond Meat patty on an English muffin, was first trialed across the borough of Manhattan in New York City last July. It was a big success. According to Dunkin’, sales were more than double the original forecast. The chain intended to launch the sandwich early this year, but due to its popularity, it rolled out to more than 9,000 stores last November.

Additional collaborations with Beyond Meat may be on the horizon. “I think this is going to be a partnership for years to come,” Dunkin’ CEO David Hoffman said in an interview with CNBC.

The Dunkin’ commercial isn’t the 48-year-old rapper’s first time working with Beyond Meat. Last February, Snoop Dogg served Beyond Burgers at the pre-Grammys party. And last May, he drove a Beyond Meat food truck around El Segundo, California — where the plant-based meat company is headquartered — in order to promote its IPO.

As well as the commercial spot, Dunkin’ announced the upcoming Beyond Collection by Dunkin’ and Snoop Dogg. The digital pop-up shop will sell the green tracksuit worn in the commercial, a bomber jacket, and a beanie. The items will promote the new Beyond D-O-Double G Sandwich. The limited-edition sandwich features the Beyond breakfast sausage with egg and cheese on a glazed donut.

“When I got the chance to work at Dunkin’ for the Beyond Sausage Sandwich launch, I got to thinking about what other Beyond Meat sandwiches we could create. Being around my favorite glazed donuts got me inspired, so today we are dropping The Beyond D-O-Double G Sandwich at Dunkin’ restaurants nationwide,” Snoop Dogg said in a statement.

Dunkin’ has not revealed when its Beyond Breakfast Sausage commercial will begin airing. 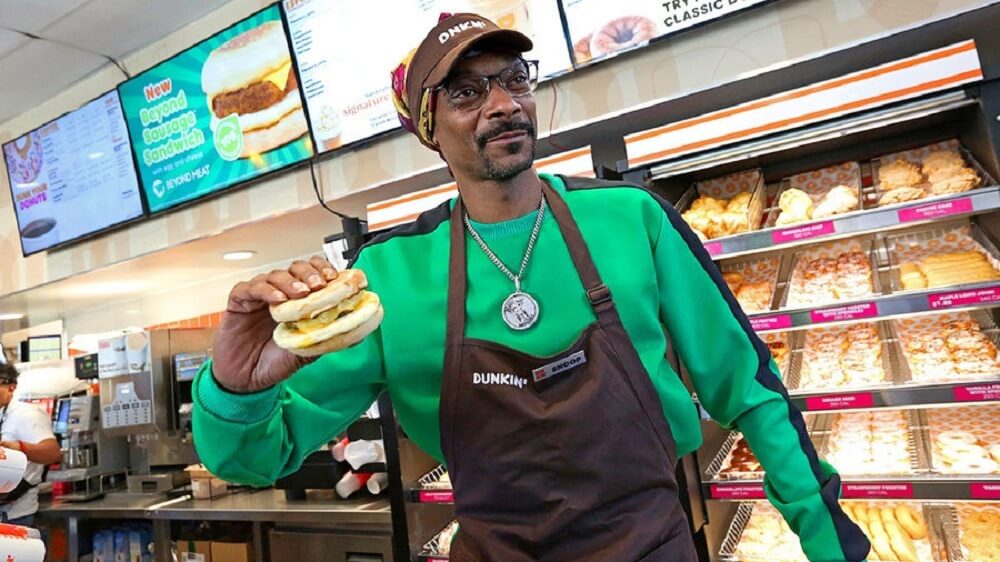