“Snoop’s investment signals a new era for the brand, not to mention the future of munchies at large,” the company said in a press release.

“I’m excited to partner with the Outstanding Foods team. They got some great snacks coming out…. Wait until you see what else we got up our sleeves, ya dig,” said Snoop Dogg.

“To have Snoop aligned with Outstanding Foods is not only checking off an item on my bucket list, but it’s also exposing Snoop’s millions of fans to our tasty as hell, protein-packed products,” added Bill Glaser, co-founder and CEO of Outstanding Foods.

Outstanding Foods introduced the new product last month. The rinds are a vegan version of traditional fried pig skins made from pea protein. 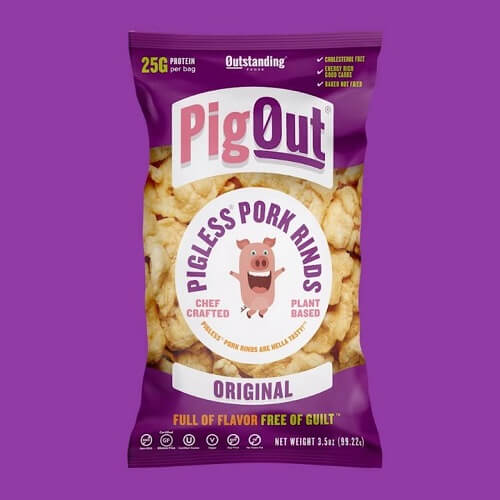 In 2018, Outstanding Foods announced the launch of its vegan PigOut Chips.

The vegan bacon chips, which are made from mushrooms, are now sold in Whole Foods, Kroger, Sprouts, Wegmans, Fairway, and Plum Market stores nationwide.

Pig Out chips are available in a variety of flavors, including Original, Cheddar, Chipotle, and Kansas City BBQ.

The chips contain 73 percent less saturated fat and 69 percent less sodium than traditional pork bacon. The mushroom-based snack does not contain cholesterol since it is made without animal products.

Outstanding Foods revealed it is currently working on the second version of the PigOut Chips. The new version will resemble a bacon strip.

The company’s new PigOut Pigless Pork rinds retail online for $3.99 for a 3.5-ounce bag. Each 3.5-ounce bag features 25 grams of plant-based protein and is free from gluten, soy, GMOs, cholesterol, and trans fats.

According to Outstanding Foods, ten percent of the sales generated at Snoop’s special PigOut site, www.piglessrinds.com, go to his charity Snoop Special Stars. The non-profit organization provides inner-city children the opportunity to participate in youth football and cheer.