Snoop Dogg might have just spend a day driving a Beyond Meat truck.

“Shout out to @BeyondMeat for their IPO today,” he wrote on Twitter.

Beyond Meat became the first vegan meat brand to go public earlier this week, expected to offer 9.75 million shares. Initially priced at $25 per share, the plant-based brand ended at $65, a 163 percent increase in value.

Snoop Dogg’s Beyond Meat truck had to do with the unofficial “Beyond Meat Day.” The El Segundo, California-based company announced a promotion for free Beyond Burgers across various chains carrying the “bleeding” plant-based patty yesterday.

Shout out to @BeyondMeat for their IPO today ! U can get a taste of the future of protein tomorrow for FREE ‼️ Visit https://t.co/S7w7dgZSnc #beyondambassador pic.twitter.com/WvInpUeZ5b

Beyond Meat’s presence in restaurants has steadily increased over the past few years, ranging from mini-chains like the Queens, New York-based Bareburger to Del Taco and Carl’s Jr. — the latter of which Snoop Dogg is also a fan. The company is best known for the Beyond Burger, a beef-like vegan burger that “bleeds” beet juice.

He promoted the chain’s Beyond Star burgers last February following the Grammys. He also performed at the Environmental Media Association Honors Gala last June against a backdrop of the Beyond Meat logo. 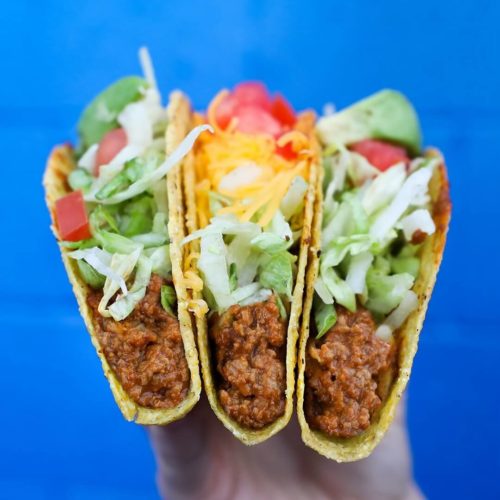 Beyond Meat is served at every Del Taco | image/Instagram

On its initial IPO filing, Beyond Meat credited the support of celebrities like the 47-year-old rapper in helping it succeed.

“We are fortunate to have partnered with celebrities such as Tia Blanco, Leonardo DiCaprio, Snoop Dogg, Kyrie Irving, DeAndre Hopkins and DeAndre Jordan who share our core values. Their organic involvement and interest are helpful to promoting our overall mission,” the brand wrote, referencing its recent partnership with top athletes.

Launched in 2009, Beyond Meat is available in more than 15,000 restaurants, hotels, universities, and more across the globe.