You can now buy life-sized models of polar bears that look just like the real thing. Proceeds from the project, called ANIMALS AS ART, go towards wildlife protection.

The image made him emotional, according to the publication. “This once living and breathing majestic beast had been killed, only to become a lifeless, decorative object for human entertainment,” My Modern Met wrote. Polar bears are listed as vulnerable, which means they face a high risk of extinction. Hunting and climate change are driving population numbers down.

The sight inspired him to create the same model — a life-sized, life-like polar bear sculpture — with cruelty-free materials.

“I’ll use my experience to create animals that look alive. Not by killing animals that were alive,” Okabe said to My Modern Met. He joined forces with Japanese animal sculptor Shinobu Matsumura and chief model creator of Zeppet workshop Yuya Takahashito to begin the work. The three produced an anatomically accurate model of a polar bear sleeping with a cub, with a base structure that mirrors the feel of the muscles, soft tissue, and skeleton of a polar bear. 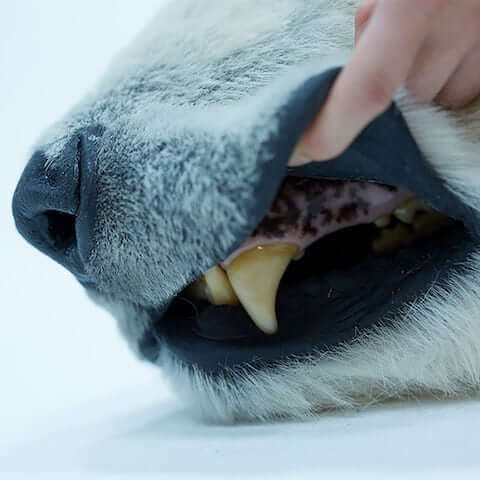 The animals’ bodies are covered with cruelty-free, vegan fur sourced from a manufacturer that makes faux animal fur for Hollywood blockbuster films. Each hair was planted individually to create an authentic look and feel.

The sculptures exercise close attention to detail, including realistic texture of paw pads, claws, and teeth, which according to My Modern Met, look like real taxidermied polar bear features.

“Take a glimpse of its fierce row of teeth, which hides just beneath its unassuming peaceful expression,” ANIMALS AS ART said. “Our Polar Bear is not only cuddly, but it also reminds us of its carnivorous origin.”

The piece is the first sculpture in an ongoing series called ANIMALS AS ART. Okabe hopes the project will help people realize they can still enjoy wildlife in a cruelty-free way. He will donate 1 percent of revenue to WWF Japan, a non-government wilderness preservation organization. WWF aims to help polar bear populations stay strong by monitoring the animals, introducing patrol teams to keep towns and bears safe, reducing industrial impacts like oil spills, and protecting the last ice area of the Arctic.