The Youth Empowered Action (YEA) Camp is a “social justice leadership camp for teen activists,” that has been running since 2009. The organisation teaches and inspires young people who want to change the world, giving them the skills they need to help the planet and society.

However, not wanting to exclude passionate adults, YEA has now also opened the first camp for like-minded grown-ups who want to make a difference, too. The week-long camp experience will take place at the beginning of July at Woodstock Farm Sanctuary in High Falls, New York.

YEA Camp focuses on many social justice issues, including animal and environmental welfare, and runs important, inspirational workshops on how to build your activism and communication skills. They help people to build their own self-confidence and assist them in managing any negative emotions that can get in the way of effective activism. Everything the team does is to help attendees “feel more optimistic about the movement for social justice” and the role that they can play within it. The camp also provides yoga and meditation classes for purposes of self-care and serves an exclusively plant-based menu that consists of dishes such as Tofurky wraps and vegan mac and cheese. 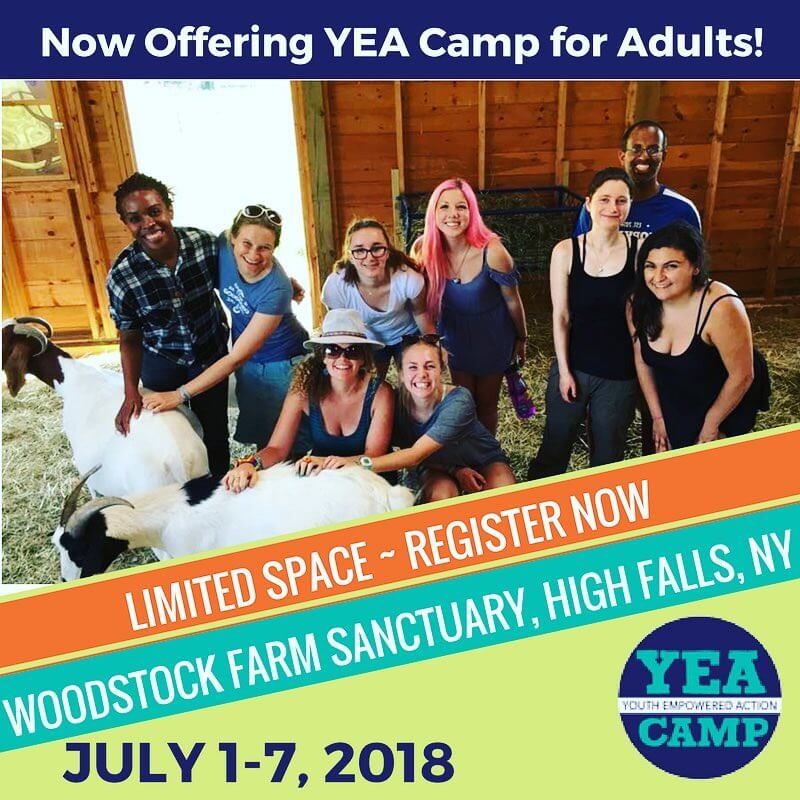 “So many adults have told me over the years that they wish YEA Camp had been around to help them when they were younger, or that they wish we could offer a similar program for adults who are interested in activism and social justice,” explained the founder of YEA Camp, Nora Kramer told VegNews. She added, “with so many problems in our world, our goal is to help train and support more people of any age to make a bigger difference on the causes they care about.”

“YEA Camp is not only one of the most fun events ever created – it just might shift the course of history,” Ocean Robbins, who is the founder of Youth for Environmental Sanity and the Chief Executive of Food Revolution Network said. “The more people who participate in YEA Camp, the more hope we will have for our future.”

Find out more about getting involved here.