Although SoftBank Group hasn’t announced which companies it will invest in, Vegconomist speculates that Chile-based startup NotCo is a possible contender. NotCo uses artificial intelligence (AI) software called “Giuseppe,” which analyzes foods at a molecular level. From there, it determines the ideal ingredients for creating vegan versions of non-vegan foods.

The investment is part of SoftBank Group’s goal to invest $1 billion in Latin American companies. Last year, it launched the $500 million SoftBank Innovation Fund. It also invested around $1 billion into Rappi, a Colombian delivery app. 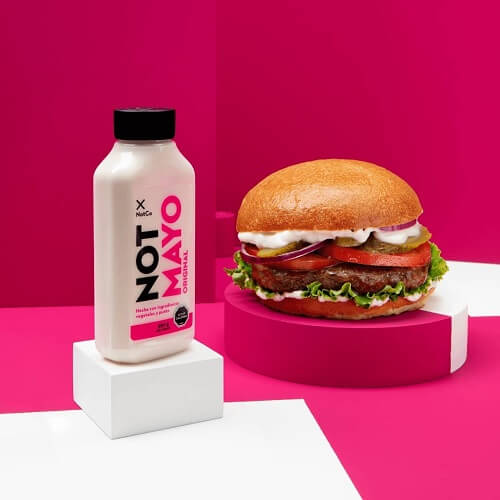 NotCo founders Matias Muchnick, Karim Pichara, and Pablo Zamora, saw a need for healthier food in Chile. So, they sought to make vegan mayonnaise. Why mayo? Chile is the third-largest consumer of the condiment in the world. “We put mayo into anything,” Muchnik told Fast Company last March.

So far, its Not Mayo has been a success. NotCo began selling its product in 2017. Today, it’s available in Chilean Wal-Mart stores as well as stores in Argentina and Brazil. In Chile, Not Mayo has acquired 10 percent of the mayonnaise market. Muchnik added, “92 percent of our customers are not vegan so it’s a mainstream product.”

Brazil and Argentina appear to be ideal markets as well. Last year, a survey conducted by the Institute for the Promotion of Beef found that 60 percent of Argentinians are considering going vegan due to rising meat prices. Many national dishes are centered around meat, including morcilla (blood sausage), chorizo, steak, and ribs. By 2020, NotCo hopes to launch plant-based ground meat and sausage, which could appeal to consumer preferences.

According to a 2018 survey released by the Good Food Institute, a nonprofit that promotes vegan alternatives to animal products, found that 30 percent of Brazilians are reducing meat consumption. A further 76 percent view eating fewer animal products positively. The nonprofit aided Brazilian food tech startup Fazenda Futuro in creating the Futuro Burger, a vegan burger made from pea, soy, and chickpea protein.