Updated July 8, 2019. One of South Korea’s biggest dog meat markets is shutting down for good.

The Gupo Livestock Market in Busan, one of the nation’s largest markets that sells chilled dog meat as well as live dogs killed to order, will be turned into a public park instead. Local authorities reached an agreement with the market’s 19 dog meat sellers.

Animal groups were on site to rescue 85 dogs from the market, offering vendors compensation to set up alternative businesses. They have been transported to a temporary shelter to recover from the ordeal, according to animal rights nonprofit Humane Society International (HSI). A few will be rehomed in North Korea and the remaining will be flown to the U.S. and Canada to be put up for adoption.

Nara Kim, dog meat campaigner for HSI, welcomed the closure as an “end to Gupo’s dog meat era” and commended both sides for working toward a common goal that will benefit the community. 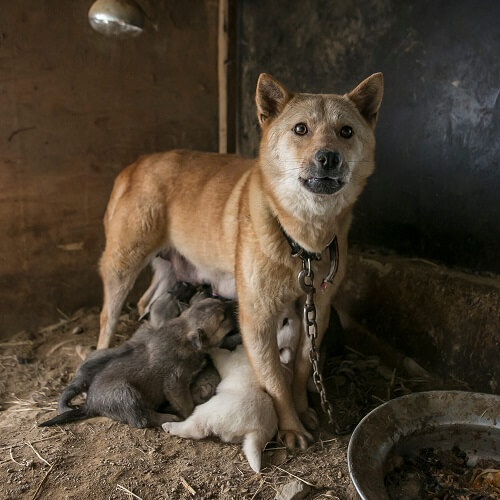 A mother dog and her puppies rescued from Gupo | image/HSI

“The dog market scene was really upsetting, with dogs displayed in cages in front of each store. The smell was overwhelming. HSI has closed down 14 dog meat farms in South Korea and rescued nearly 1,800 dogs, all of whom would have ended up in a terrible place just like this,” Kim said.

All the dogs at Gupo have been removed and transported to a temporary shelter where they will recover from their ordeal. A few will remain in Korea to find new homes, but HSI will fly all the others overseas to Canada or the United States to get the love and care they deserve before being placed with shelter and rescue partners who will seek adoptive homes.”Kim said.

South Korea is the only nation that farms dogs for human consumption. According to HSI, more than 2 million dogs are slaughtered for meat each year. Dogs are kept in wire cages and death comes slow, by electrocution. It’s typical for dogs to take up to five minutes to die.

But, the public opinion of dog meat is changing. Consumption is on the decline; 70 percent of South Koreans say they won’t eat dog meat in the future, according to a June 2018 survey conducted by Gallup Korea. HSI also notes that the industry is in “legal limbo.” Provisions of the South Korea’s Animal Protection Act bans killing animals in a “brutal way” and in front of other animals of the same species. 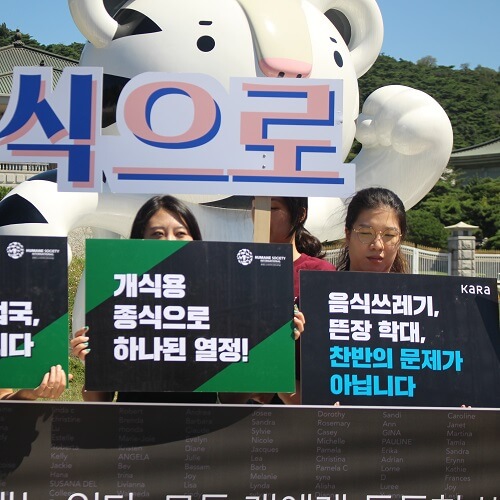 The international group has helped shut down a dozen dog meat farms since it launched its Korean campaign in 2015. The end to the Gupo Livestock Market follows the closure of Taepyeong, South Korea’s largest dog slaughterhouse, last November. Its closure was a collaborative effort between HSI and local animal rights group, the Korean Animal Welfare Association.

Like Gupo, Taepyeong will be turned into a public park. Last November, HSI helped a dog meat farmer of 14 years shut down his farm to start growing medicinal herbs.

“This is the latest crack down on an increasingly unpopular dog meat trade,” said Kim. “And we hope that it inspires further closures in future where dogs also suffer for the meat trade, such as Chilsung market in Daegu.”