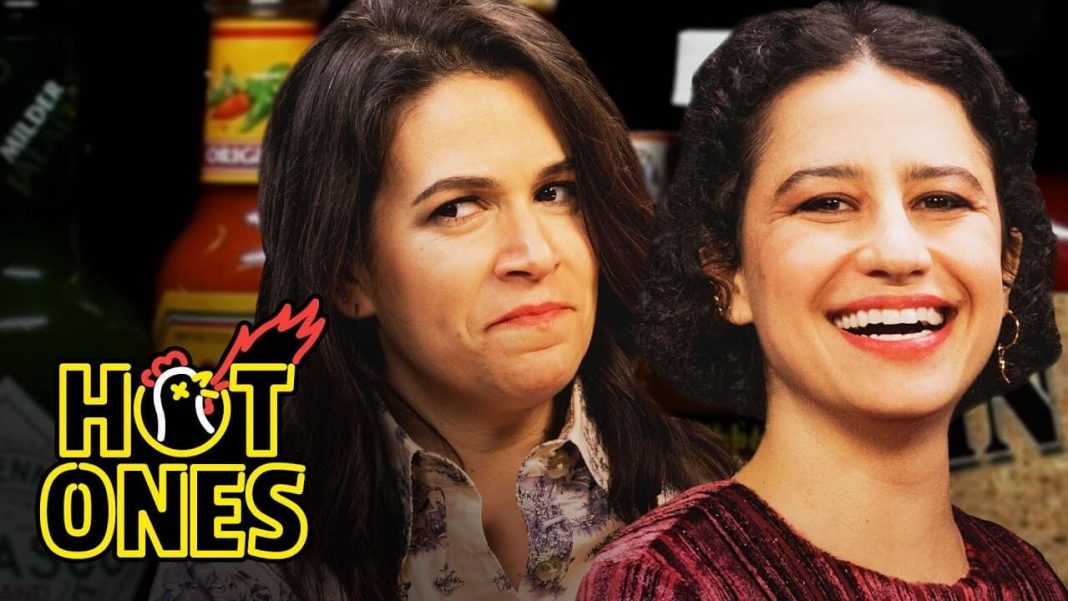 During the show, the duo attempted to answer host Sean Evans questions whilst handling the heat of the wings, which keep getting spicier and spicier with every round.

Evans quizzed the pair about their careers, their Instagrams, “Broad City,” call centre jobs, and weed; the pair are connoisseurs of the latter, with references to the drug frequently popping up in their show.

“Broad City,” executive produced by comedian Amy Poehler, sees Jacobson and Glazer play versions of themselves in real life as they face the ins-and-outs of two 20-something women living in New York City.

Glazer even shared a recipe for “Firecracker” edibles with Evans, which is drunk in smoothie form on the show. “You mash up weed into something really fat based like almond butter… I’m like a health nut so, I do my Firecrackers with almond butter,” she explained. “You can put it on a rice cracker, graham cracker, whatever, or you can just put it on a baking sheet and put it in something after.”

She does add, however, that the Firecracker is not for cannabis beginners. “We would lose our minds,” she said. “We would go into fetal position in our respective rooms.”

“Hot Ones” is popular among celebrities, with a huge backlog of episodes featuring stars such as supermodel Chrissy Teigen and comedian Jack Black. The web series normally offers guests chicken wings, however, some interviewees, like Glazer and Jacobson, opt for vegan nuggets or cauliflower wings (the hot sauce, however, is always non-negotiable).

Parody artist Weird Al Yankovic recently ate vegan wings on the show, where he talked about his career and shared his recipe for a “Twinkie Wiener Sandwich” with tofu dogs. The recipe was initially made popular (with regular hot dogs) in his now cult classic movie “UHF,” released in 1989.

Vanessa Hudgens, Natalie Portman, Alexa Chung, and Jeff Goldblum have also made appearances on “Hot Ones,” each choosing to munch on fiery meatless wings.