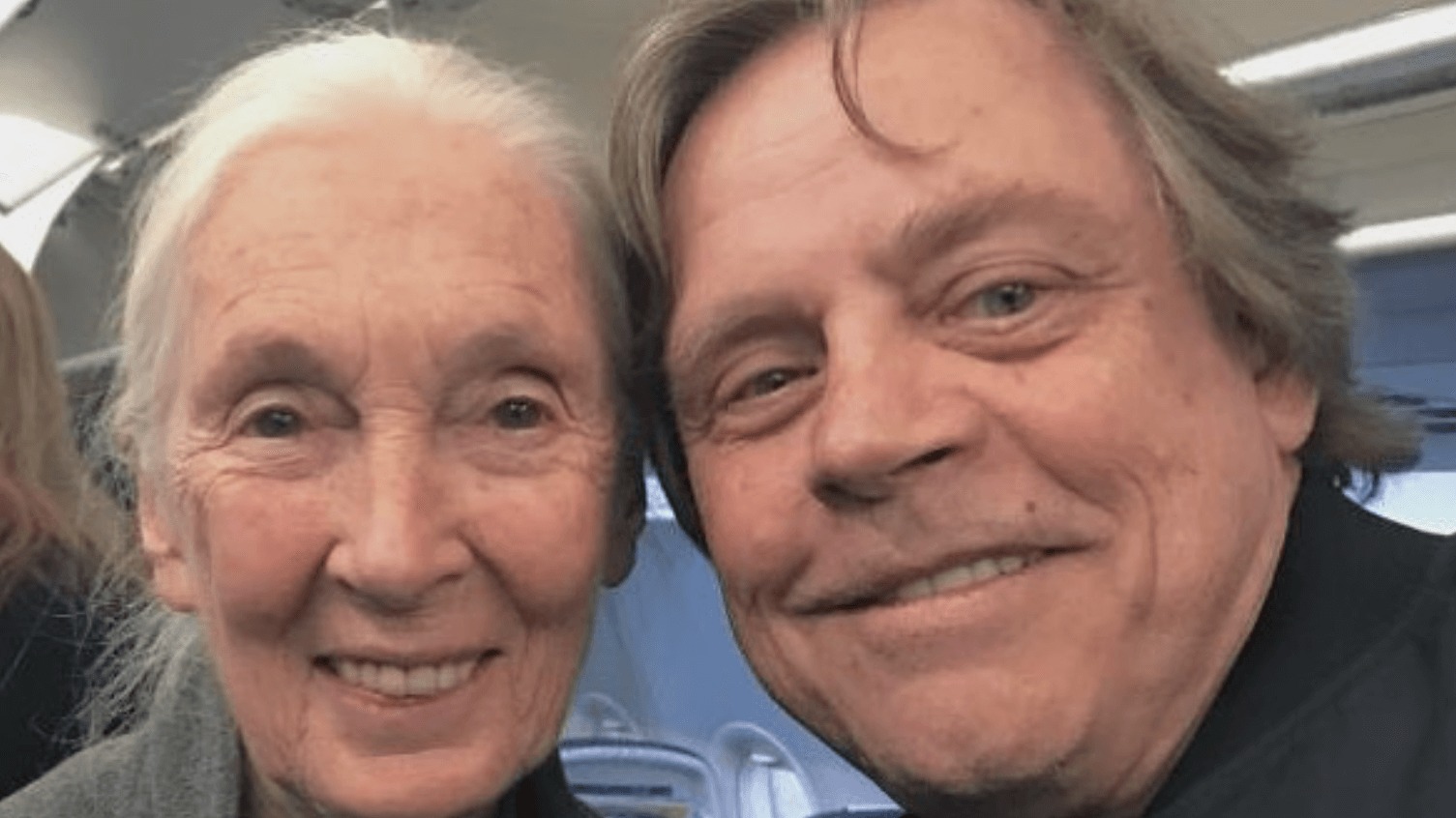 Actor Mark Hamill, best known for his portrayal of Luke Skywalker in the “Star Wars” film series, has spoken out about animal welfare issues and conservation.

In a post on Instagram, the star urged his more than 3 million followers to help save chimpanzees from extinction by supporting primatologist Jane Goodall.

“As a kid, I dreamed of having a pet chimpanzee but now realize they belong in the wild,” Hamill wrote. “In 1900 there were 1 MILLION living there. Today only around 340,000. Please help #JaneGoodall #SaveChimpsFromExtinction! ? ”

The post was also shared by Goodall on her own Instagram, praising the actor for using his platform to “demonstrate tremendous kindness and compassion (a new hope indeed!).”

For decades, Goodall, who is a vegetarian, has worked extensively on environmental and animal matters. Her research on the social behaviors of chimpanzees provided new knowledge and a fresh understanding of our closest living relative — with whom we share roughly 98 percent of our genes — that has since shaped the primatology field.

At the age of 84, Goodall continues to implement change. The Jane Goodall Institute, founded by Goodall, works to empower individuals to take action and “make a difference for all living things.” It strives to conserve at-risk habitats, rescue orphaned chimps, and raise awareness on the endangered species and the factors that threaten its existence, such as poaching, hunting, the illegal wildlife trade, and human-induced habitat loss.

Hamill is not the first “Star Wars” actor to get involved in animal welfare issues. Thandie Newton, who appeared in “Solo: A Star Wars Story,” was inspired to go vegan by her co-star and longtime vegan Woody Harrelson. The two are joined by fellow vegan Daisy Ridley (or Rey), who spends her free time caring for her deaf and blind dog Muffin.

Natalie Portman, who starred in Episodes I-III as queen-turned-senator Padmé Amidala, regularly uses her platform to promote a vegan diet. She was the narrator and producer of “Eating Animals,” a documentary released this summer that tackles the ethical issues of factory farming. Longtime vegan Woody Harrelson, who played renegade pilot Han Solo’s mentor in the standalone 2018 film “Solo: A Star Wars Story,” is working on a plant-based food travel documentary series with “Wicked Healthy” brothers, Derek and Chad Sarno. Even Chewbacca experienced a vegan epiphany as he pondered the concept of “friends, not food” following his friendship with the Porgs.

While the population of primates around the globe suffers, Goodall believes it is not too late to make a difference. In an interview, she said, “We truly have harmed the world, but I still think there’s a window of time for us to try and turn things around. It can never get back to the way it was … but we have to try”.