The world’s largest coffeehouse chain announced last May that it joined the WWF’s (World Wildlife Fund) ReSource: Plastic as a principal member.

“World Wildlife Fund is a key partner for Starbucks in our efforts to continue minimizing our environmental footprint,” John Kelly, senior vice president of global public affairs and social impact at Starbucks, said in a statement. “We look forward to being a part of ReSource: Plastic as we know it takes collaboration to find scalable, truly impactful solutions. We’re committed to learning and leading alongside other brands as we work toward our aspiration of sustainable coffee, served sustainably.”

The collaboration will help ensure that Starbucks’ ongoing sustainability initiatives. The chain announced plans to convert 10,000 stores to renewable energy by 2025 in September 2018 at the Global Climate Action Summit in San Francisco.

The change is part of the vegan-friendly chain’s Starbucks Greener Stores initiative, which has ultimate goals of powering stores with 100 percent renewable energy. Other aims include the use of technology that will save 25 to 30 percent on energy and water use, as well as using responsible materials that have a smaller impact on the planet. 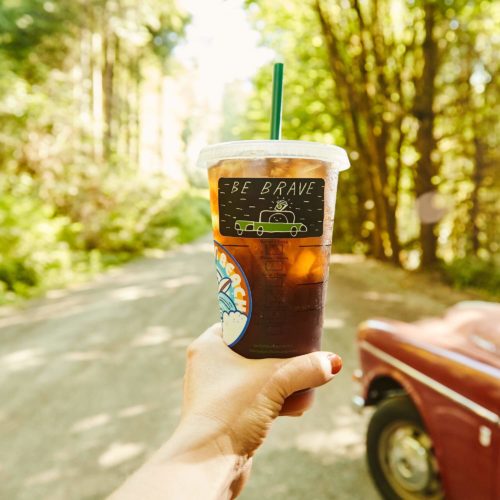 Starbucks is kicking off a new sustainability initiative with the WWF

“One of our social impact pillars is sustainability,” said Kevin Johnson, Starbucks’ chief executive officer. “We are a company that believes, in the fabric of mission and values, that the pursuit of profit is not in conflict with the pursuit of doing good.”

On an individual scale, the stores will provide a cleaner, healthier environment for customers and staff by improving air and water quality within the outlets. Starbucks hopes other retail industry players will adopt similar behaviors.

At the summit, Johnson pointed out that shifts toward sustainability are not just good for the planet, but good for the bank accounts of businesses involved. It was estimated that the Greener Stores initiative will save Starbucks $50 million in utilities over the next decade.

The move toward sustainability joins other efforts by the chain to reduce its impact on the environment. Last July, the company announced intentions to ditch single-use plastic straws from its 28,000 locations across the world. Earlier this year, Starbucks said that it would begin trials for “Greener Cups,” an eco-friendly alternative to its hard-to-recycle paper cups.