Retail trade journal The Grocer teased the new drinks on its Instagram page. “Joining Almond Iced Coffee, Coconut Cocoa Cappuccino and Oat Vanilla Macchiato have just landed in Morrisons,” it captioned alongside a photo of the three drinks.

The vegan coffees are priced at £1.60 a drink and will hit Asda store shelves in May.

In 2017, Starbucks U.S. launched bottled, dairy-free Frappuccinos. However, the “sweet and creamy” beverages were not vegan. Last year, the coffee chain made the coffees, available in the flavors mocha and vanilla, completely plant-based. 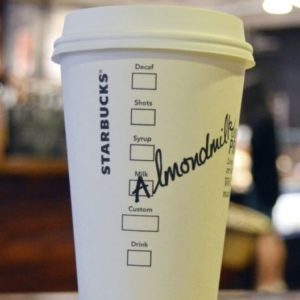 In an effort to keep up with the growing consumer demand and to boost its sustainability efforts, Starbucks has been steadily adding vegan options to its menus at locations around the world.

Most recently, the coffee chain partnered with Beyond Meat to add five new products made with vegan meat to its lunch menu at locations in China. The new “GOOD GOOD” menu will feature Beyond Meat in three pasta and lasagna dishes in more than 3,300 locations. It will also feature Hong Kong-based Omnipork’s vegan pork meat in two dishes.

Starbucks also announced it will be adding Swedish brand Oatly’s dairy-free oat milk to its menus.

“Our new menu items make it easy and enjoyable to explore new lifestyles, starting from what we eat and drink,” Leo Tsoi, Starbucks China’s senior vice president, chief operating officer, and president, said in a statement.

Earlier this year, Starbucks added Oatly’s plant-based milk to its menu at select locations across the U.S. midwest. If successful, it may launch oat milk nationwide in the U.S.

The coffee chain also launched two new nondairy beverages nationwide: an Almondmilk Honey Flat White—which can be made vegan by omitting the honey—and a Coconutmilk Latte.