In the statement, Johnson says that the chain intends to expand its plant-based options. Speaking to Bloomberg following its release, he said: “alternative milks will be a big part of the solution. The consumer-demand curve is already shifting.”

The chain currently offers almond, coconut, and soy milk, and recently rolled out oat milk to 1700 stores in the U.S. However, Starbucks still charges customers for non-dairy alternatives—an additional cost that some are referring to as a “vegan tax.” Some activists have organized sit-in protests and claim that the “tax” is discriminatory towards vegans as well as those with allergies and other dietary restrictions.

According to the National Institute of Health, around 65 percent of all adults are lactose intolerant. For those of East Asian descent, 70 to 100 percent of people are affected. The additional cost disproportionately impacts people of color and those with allergies, as well as those trying to make an environmentally conscious choice. Protests have been held across the U.S., including New York, Portland, San Diego, and Arlington.

Dairy has a significant environmental impact. According to the World Wildlife Fund, every day, a single dairy cow produces around 17 gallons of manure and urine. “Improperly managed, manure emits greenhouse gases, pollutes water and air, and damages wildlife habitats,” it says.

It takes 144 gallons of water to produce just one gallon of milk in the U.S; more than 93 percent of that water is used to grow food for the cows. Every day, a U.S. dairy cow eats around 100 pounds of food. 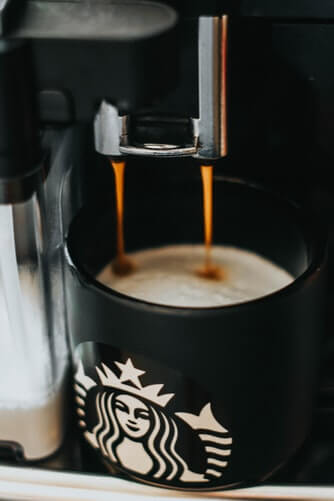 Starbucks intends to make some big changes for the planet.

Starbucks worked with WWF and sustainability consultant Quantis on an environmentally-focused audit. The results showed that the coffee chain was responsible for emitting 16 million metric tons of greenhouse gases in 2018. It also used one billion cubic meters of water and dumped 868 metric kilotons of waste.

These goals aren’t set in stone. Johnson revealed that on the chain’s 50th anniversary in 2021, it will formalize its 2030 goals “based on what we have learned between now and then.”

“I see today as a milestone for our business,” he continues. “As we declare our concern about our planet’s future and commit to do more.”

In a statement sent to LIVEKINDLY, Starbucks said that it has not “announced plans to ‘phase out’ dairy as part of its strategy to become a resource positive company.” Instead, it will “expand plant-based options, migrating toward a more environmentally friendly menu.”

[February 2, 2020 editor’s note: This article was updated to include comments from the Starbucks corporation.]